Record: A mounted specimen (photograph above) was shot from a flock of about 40 “Hutch” Canada Geese (now known as Cackling Goose, Branta hutchinsii) 2 Nov 1968 in Otoe Co (Cortelyou 1969).

Comments: The specimen cited above was thought to be a Barnacle Goose rather than a hybrid by most if not all authors until it was identified as a hybrid by Stephen Brenner and confirmed by Steven Mlodinow in 2021, although considered “albeit subtle”. Its interesting history and provenance as determined by stable isotope analysis were investigated by Jorgensen et al (2021).  The stable isotope analysis of secondary feathers indicated they were grown in the James Bay region of northeastern Canada; the hybridization event producing the bird was thought most likely to have occurred in southwestern Greenland (Jorgensen et al 2021).

Until recent years, it was assumed that reports of Barnacle Goose, especially in the Interior and on the Great Plains, were referable to released or escaped birds from collections. However, during the 2000s reports of wild Barnacle Geese in North America, particularly in the eastern US, have increased, as has the likelihood that at least some Barnacle X Cackling Goose hybrids may involve genes from wild Barnacle Geese (Jorgensen et al 2021). A genetic study on about 1000 white-cheeked goose tail fans conducted in Canada to determine if DNA analysis could be used to track these species for hunting control purposes found that two Cackling Goose tails had Barnacle Goose mitochondrial DNA (Jim Leafloor, Steve Mlodinow, pers. comm.). Dr. Leafloor noted that this may have resulted from an escaped Barnacle Goose, but also a wild bird living with Cackling Geese in the high arctic. 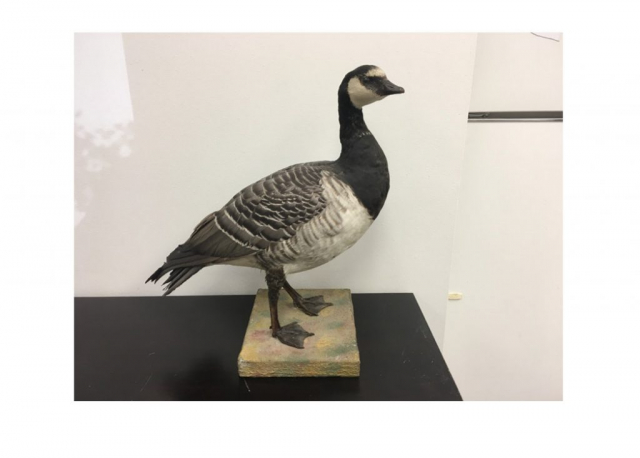