Ross and I (Joel) are continuing to work on the Birds of Nebraska – Online and one task we have been focusing on lately is acquiring photographs that can be used in species accounts for as many species as possible. For a number of species the only photos we will obtain are of specimens. For example, there is only a single Nebraska record of Clapper Rail, a coastal species that usually occurs a long ways from our borders. The documentation for this record is a specimen housed at the University of Nebraska State Museum. Unless a live Clapper Rails shows up again in the state, acquiring a photo of a live Clapper Rail in Nebraska is not possible. A photo of the specimen is the next best thing.

Barnacle Goose is a species that has been reported in the state on a few occasions, but there are no accepted records because those reports may have involved birds that escaped from captivity rather than wild birds that strayed from their normal range. Lacking photos of live birds, we originally used an old photograph, that appeared in the Nebraska Bird Review (NBR), of a specimen taken in Otoe County 2 Nov 1968. That photo, originally published in Cortelyou (1969, Barnacle Goose taken in Nebraska. NBR 37: 2-3), is shown above.

Earlier this week, I needed to talk to a colleague here at the Nebraska Game and Parks Commission (NGPC) headquarters in Lincoln and I stepped into an office that I often do not go into. As I was talking, I noticed a Barnacle Goose mount on a bookshelf that looked awfully familiar. Long story short, after comparing the mount with the old photo from the NBR, I believe they involve the same specimen. A photo of the mount I came across this week at NGPC is shown below. 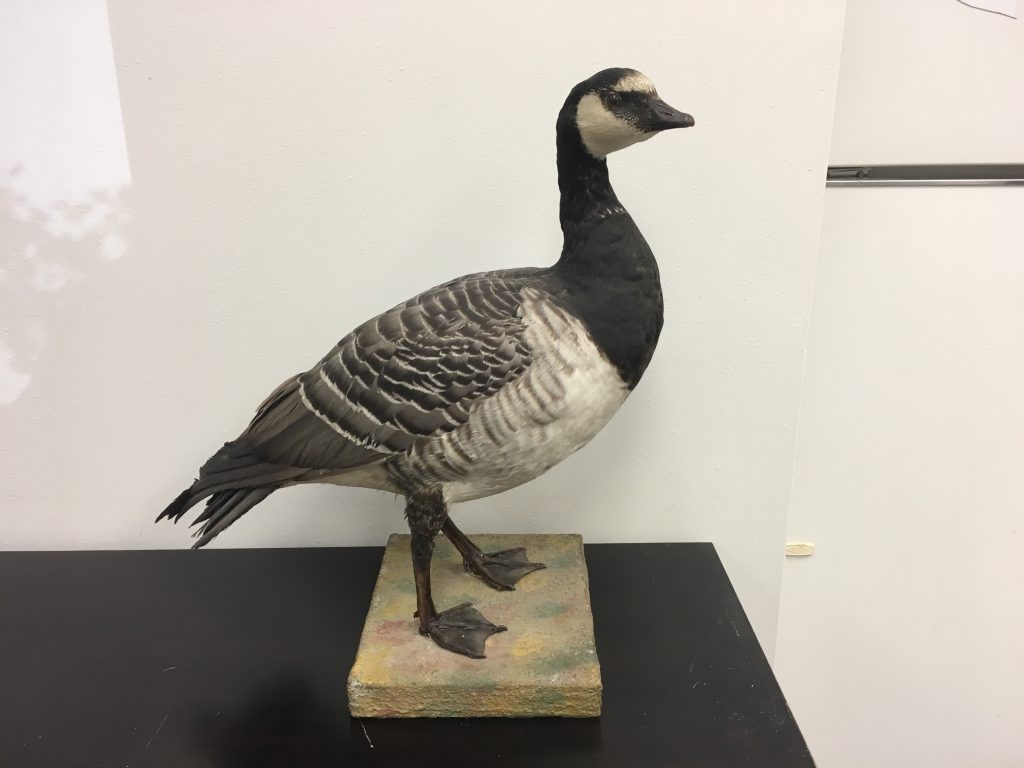 I do not know the back story of how this specimen ended up at NGPC. We occasionally receive old mounts of all sorts of animals that people want to get rid of and have no other option. Perhaps this Barnacle Goose mount was dropped off here one day or maybe it has always been here. Nevertheless, an interesting twist of fate.