Changes Since 2000: This species has consolidated its range northward in the Missouri River Valley since the 1990s; there has been a notable increase in numbers reported at Fontenelle Forest, Sarpy Co since 2009, and at least 1-2 have been reported at Wilderness Park, Lancaster Co since 2010.

As this species has increased in numbers in the lower Missouri River Valley, May reports have become more numerous, although most are from known breeding locations at Indian Cave SP, Nemaha and Richardson Cos and Fontenelle Forest.

There are a few reports west and north of Indian Cave SP, Fontenelle Forest, and Wilderness Park suggestive of spring overshoot migrants: a singing bird identified as this species by comparison of its song to tapes was at Ponca SP, Dixon Co 24 May 2000, a specimen, UNSM ZM9389, was collected in Cherry Co 29 May 1932, four were netted, banded, and identified as this species by wing formula at Cedar Point Biological Station, Keith Co, 21-29 May 1996 (Brown et al 1996), and one was in Dakota Co 1 Jun 2021.

Summer: This species has become regular in summer only since around 1990 at Indian Cave SP and Fontenelle Forest. Prior to 1990 the only reports were in the Missouri River Valley, widely spaced, including a surprising nine egg dates 10 Jun-6 Jul for Douglas and Sarpy Cos during 1895-1901 (Hanson 1952, Mollhoff 2022), and six nests found during a survey in Sarpy Co in 1944 (Garrett 1944). At least some of the early records may have been referable to other species, however; Ducey (1988) suspected that “taxonomic confusion” might have been involved.

There has been little information published on early sightings at Indian Cave SP; the first known record there was 15 Jun 1994. There were up to three birds on Trail 9 through 25 Jun 1995, and since then it has been a fairly common component of the avifauna there, although nesting has not been confirmed. The best count to date is 12 on 28 May 2012, although recent standardized surveys at this location suggest the number of birds at this site during June may number in the hundreds (Jorgensen et al 2014).

There have been persistent reports of 1-2 singing males at Wilderness Park, Lancaster Co since the first reports there 19-23 May and 8 Jun in 2010. Since 2010, at least one Acadian Flycatcher has been present during summer; in 2012 two birds were present at different locations 5 Jun-14 Jul. An older Lancaster Co report was for 22 Jul 1988, and more recently one was at Spring Creek Prairie, Lancaster Co 18 May 2016.

Departure occurs by mid-Aug. Substantiated records in Kansas extend to 30 Sep (Thompson et al 2011) and to 20 Sep in Missouri (Robbins 2018).

Comments: An adult male specimen assumed to have been collected by Cary in Sioux Co 26 May 1900 (Cary 1901, Crawford 1901, Rosche 1982) cannot now be located; Swenk and Dawson (1921), who also had not seen the specimen, suggested that Cary’s report may have been based on a misidentification, as a specimen taken in the same place two days later by Hunter and said to be identical in appearance to that of Cary was identified as “E. traillii brewsteri” (apparently a Willow Flycatcher) by Oberholser. 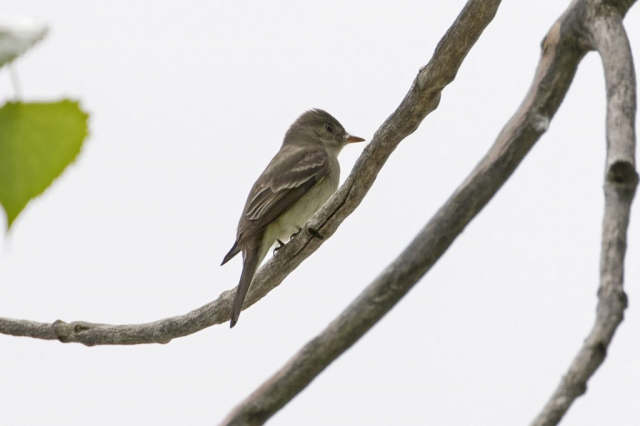