As this species does not breed in Nebraska, breeding records cited as “Traill’s” Flycatcher by Ducey (1988) can be assumed to pertain to Willow Flycatcher.

Most reports are from the east and north, but Alder Flycatcher occurs regularly west at least to Keith Co and into the Panhandle. Brown et al (1996) considered Alder Flycatcher a common migrant in the Keith Co area 22 May-2 Jun; an amazing 62 were banded there in four years during spring and fall. Until 2021, there was only one Panhandle record: one well-described in Kimball Co 1 Jun 2019 (eBird.org), but in 2021 there were nine birds reported at six locations, most photographed or recorded (eBird.org): 21 May Ash Hollow SHP, Garden Co, 22 May two Lake Minatare, Scotts Bluff Co, 25 May Oliver Reservoir, Kimball Co, 28 May three west of Bushnell, Kimball Co, 29 May Agate, Sioux Co, and 30 May Wright’s Gap Road, Scotts Bluff Co.

Large numbers of Alder and Willow Flycatchers probably pass through unidentified to species and are reported as ”Traill’s”. Estimates of 30 and 60 Traill’s were reported 11 and 12 May 2016 in Lancaster and Burt Cos.

Fall:  Although banding data suggest migrants are probably uncommon rather than less than annual, there are only these 15 documented fall records:

The species is generally silent and overlooked in fall although banding data from Cedar Point Biological Station in Keith Co indicate that Alder Flycatcher is a common migrant there in the period 21 Jul through at least 17 Aug; banding operations ceased on the latter date (Brown et al 1996).

In fall 2012 there were seven reports (of nine birds) in the period 5-28 Sep, the latter a vocalizing bird in Omaha.

Alder Flycatcher can only be safely separated in the field from Willow Flycatcher by vocalizations, and so Nebraska data, especially for fall, are limited to the few birds that vocalize at that time of year. Kansas specimens of Alder Flycatcher were in the periods 13-29 May and 29 Jul-12 Sep (Thompson et al 2011); undocumented reports outside of these ranges are questionable. 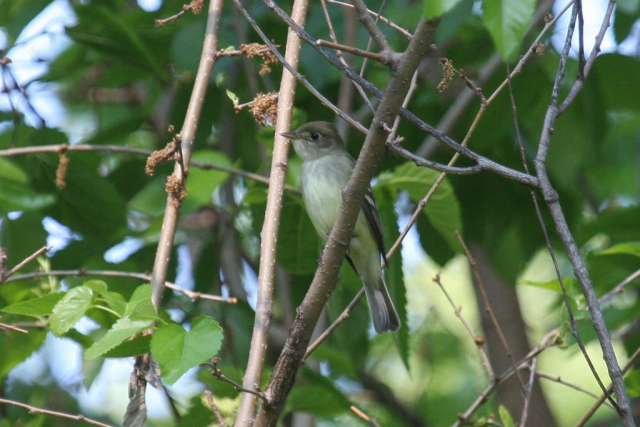