According to Phillips (1986), the western subspecies hesperis breeds in most of Nebraska west of the eastern woodlands and eastern brachyrhynchos breeds in the wooded east, presumably the Missouri River Valley. The Rocky Mountain subspecies hargravei may breed in the northwest (John Hubbard, personal communication).

Resident: Many crows breeding in Nebraska are probably resident; banding data cited by Verbeek and Caffrey (2020) suggested that half of crows banded in winter between 38 and 42 degrees latitude (Nebraska lies between 40 and 43 degrees) in the eastern USA were resident, but even in southern and central Illinois, many breeders migrate.

Spring: Crows of the Great Plains exhibit marked migratory tendencies (Bent 1946); birds from the northern parts of the breeding range leave in winter, generally southward. Migration is marked by movements of flocks; peak migration in Nebraska is during Mar, although the 1274 at Brady, Lincoln Co 13 Feb 2010 were probably early migrants.

Banding studies of birds wintering in Oklahoma showed that most of these birds summered in the prairie provinces of Canada; birds banded in Alberta, Saskatchewan, and Manitoba migrated southeastward through eastern Montana, North Dakota, and western Wisconsin as far as Oklahoma and eastern Texas (Verbeek and Caffrey 2020).

Summer: BBS data (Cortelyou 1978, Sauer et al 2017) indicate that summering birds are most numerous in the east, with fewer birds distributed rather evenly over the rest of the state and absence in the extreme southwest. Around 1900 this species was rare west of the 98th meridian, but was spreading westward (Bruner et al 1904). Tout (1902) believed that the western limit of its range was Otoe Co, and by 1938 it had spread to the Sandhills, probably due to tree planting by settlers (Viehmeyer 1938). An early southern Panhandle specimen was taken in Kimball Co 8 Jun 1919 (UNSM 7639), and Swenk noted (1906) that the species was increasing in Sioux Co and that the flock at Glen “had increased to 28” by Aug 1905. It was still rare to uncommon in the 1980s on the northeastern Colorado plains (Andrews and Righter 1992), and in Nebraska it is scarcest in the southern Panhandle and southwest. A flock of 53 was in Dundy Co 21 Jul 2000.

Winter: This species is most common in winter, when resident populations are presumably augmented by birds from further north. During late fall and winter large flocks form and often roost in cities and towns throughout the state. In the earlier part of the 20th Century these large concentrations, often numbering in the tens or even hundreds of thousands, were considered a nuisance in more isolated towns on the Great Plains, leading to the winter practice of “crow shoots,” often conducted at night at the roost site. Ron Griess (personal communication) provided interesting information on roosts that he visited as a boy with his Dad; there was a large roost in the 1930s west of Superior, Nuckolls Co, a very large roost was in trees along the Middle Loup River near Loup City, Loup Co for a few years, where around 1959-1960 guano would accumulate up to a foot deep, and in Phelps Co in the late 1960s-early 1970s a tame Great Horned Owl was used as a decoy for the 100,000-150,000 birds using a two-mile long shelterbelt west of Axtell. Roosts were present near Kearney, Buffalo Co in 1988-89 and 1989-90, when 5000 birds were counted on CBCs each year, and over 100,000 have roosted there during the winters of the mid-1990s. A roost at Holdrege, Phelps Co for about 25 years prior to 1996 has held more than 100,000 birds. “Thousands” were present in mid-Feb 2008 in the Callaway-Merna area of Custer Co, and 5000 were estimated on the Calamus-Loup CBC 29 Dec 2013. 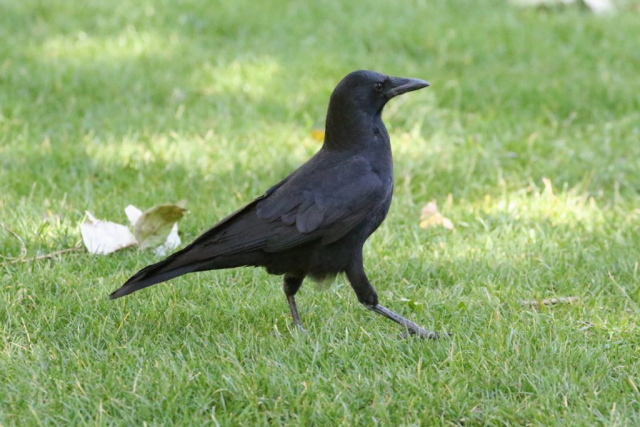 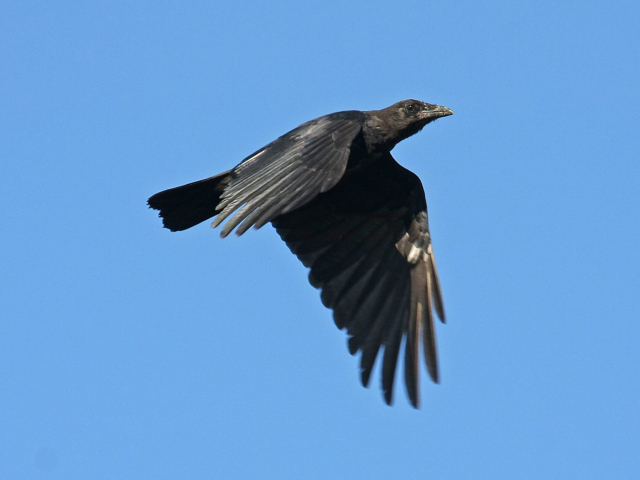