Two subspecies occur in Nebraska. Rapp et al (1958) considered tristis “the common form throughout the state” and that pallidus was “limited to northern Sioux Co”. Bruner et al (1904) cited specimens of pallidus collected in Sioux Co 16 May 1901 and at Springview, Keya Paha Co 16 Jun 1902 (cited above) and concluded that pallidus was “the prevailing form” in northern and western Nebraska. Faulkner (2010) believed that tristis met pallidus in Wyoming, but that “their ranges and contact zones need further study”. Based on these distributions, American Goldfinches in some portion of western and northern Nebraska may be mostly intergrades. There is no recent information available.

Spring: It is difficult to determine arrival and departure dates, as some birds are always present. A “noticeable spring movement” occurs in Kansas in April and early May (Thompson et al 2011). Migration peaks mid-Apr to early Jun (McGraw and Middleton 2020) and because this species is a late nester, winter flocks often persist into Jun (Brown et al 1996).

Birds banded during winter in Bellevue, Sarpy Co have been recovered twice in Kearney Co, one on 2 May 2001 (Ruth Green, personal communication), indicative of at least some westward movement in spring in the Platte River Valley.

American Goldfinch is a late nester, waiting until thistledown is available as a nesting material, thus avoiding Brown-headed Cowbird parasitism (Brown et al 1996). Most nesting takes place in the period Jun-Sep (McGraw and Middleton 2020), and so winter flocks do not break up until well into Jun.

Fall: As in spring, goldfinches are always present, making determination of significant movements difficult. In Kansas (Thompson et al 2011), post-breeding flocks become apparent by Sep, and numbers increase during Oct-Nov as migrants arrive. Migratory activity peaks late Oct to mid-Dec (McGraw and Middleton 2020). Rosche (1982) noted that in the northwest American Goldfinch is most common in fall.

Winter: Winter distribution is fairly even statewide, although CBC data indicate extremely high numbers of goldfinches in southwest Nebraska and northeast Colorado (>101 birds per party-hour). Whether these are wintering birds from further north supplementing local residents is unknown. While there are variations in numbers from year to year, CBC data do not show the marked swings characteristic of other “winter finch” species. CBC data since 1948 show steadily increasing birds per party-hour, from a range of 1-4 through the early 1990s, then a steeper increase from 2.5 to 5 in the 1990s to 3.5-7.0 since. Highest total count of birds was 3387 in 2011-2012, no doubt assisted by the 899 on the Lake McConaughy CBC 31 Dec 2011.

Wintering site fidelity is low, as indicated amazingly by Charles Ely for Kansas: “I’ve banded over 35,000 in my yard over the last 20 years and STILL have not had a single bird recaptured”. 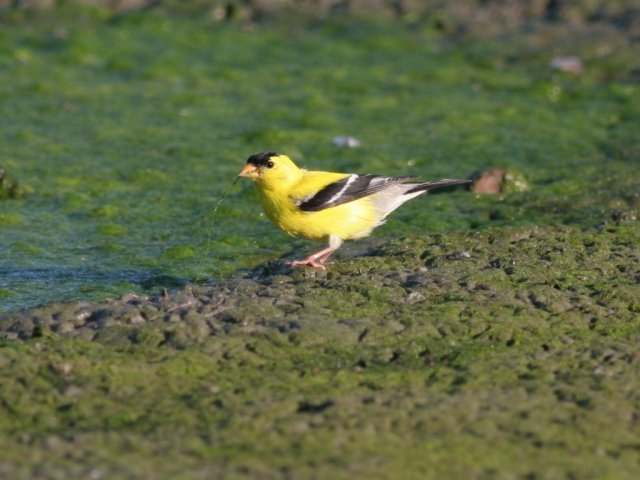 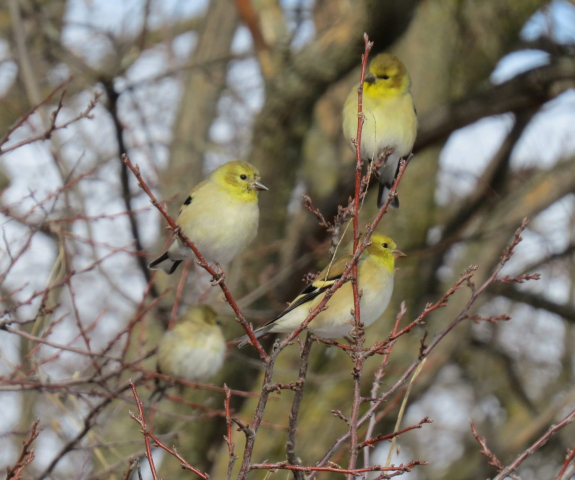