Taxonomy: Seven subspecies are generally recognized, five of these occurring north of Mexico (Pyle 1997, Vanderhoff et al 2020): nigrideus of eastern Canada, migratorius of Alaska (except southeast), Canada (except east and west) and central and northeast USA, achrusterus of the southeastern USA, caurinus of southeast Alaska and coastal western Canada, and propinquis of interior southwest Canada and interior western USA to central Mexico.

Two of these subspecies have occurred in Nebraska. The eastern race migratorius breeds west to Gordon, Sheridan Co, North Platte, Lincoln Co, and McCook, Red Willow Co, while propinquis, the Rocky Mountain race, breeds east to Sioux Co and Scottsbluff (AOU 1957). There is no information on individuals from the area in between where intergradation would seem likely, although Bruner et al (1904) stated that “most western Nebraska birds were intermediate, with an occasional propinqua.” A specimen, UNSM ZM 6652, taken in Sioux Co May 1900, was identified as migratorius, but “approaching propinqua”. Tout (1947) listed propinquis as an irregular winter visitor to Lincoln Co, identified by the lack of white spots at the tips of the outer tail feathers.

Spring: The presence of overwintering flocks makes it difficult to discern arrival dates, although there is a noticeable increase in numbers in late Feb and early Mar, and at about the same time territorial singles are seen in yards. Johnsgard (1980) noted that there is a concentration of early spring dates in the period 2 Feb-4 Mar; peak numbers were noted in Saunders Co 12 Mar-2 Apr 1994. “Thousands” were in southeast Lincoln Co by 29 Mar 2006. A rather late aggregation was the 350 at Plattsmouth Cemetery, Cass Co 6 Apr 2007. Good counts persisting into late Jun may be of late migrants; 83 were in Custer Co 11 Jun, and 65 were in Lancaster Co 21 Jun 2017.

According to Vanderhoff et al (2020), “the term “routes” does not really apply to robin migrations and there does not appear to be strong connectivity between overwintering and breeding grounds.

Summer: This species breeds statewide. BBS data indicate that breeding birds are most abundant in the east, with diminishing numbers westward (Sauer et al 2017), presumably as woodland and human habitation decrease. According to Bent (1948), the eastern subspecies migratorius spread westward as man established towns and parks. The tall- and mixed-grass prairie was not a favored habitat, a fact reflected by BBS data; robins moved in during the early 1900s Walcott, C. F. 1974. Changes in bird life of Cambridge, Massachusetts from 1860 to 1964. Auk no. 91:151-160. Close as settlers planted trees and introduced earthworms, an important food source, into prairie soils in Kansas and elsewhere in the Great Plains (Vanderhoff et al 2020). BBS trend analysis shows an annual increase of 1.34% (95% C.I.; 0.82, 1.87) statewide 1966-2013. 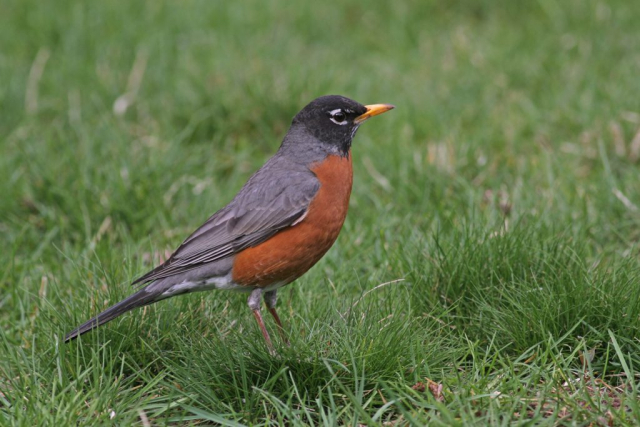 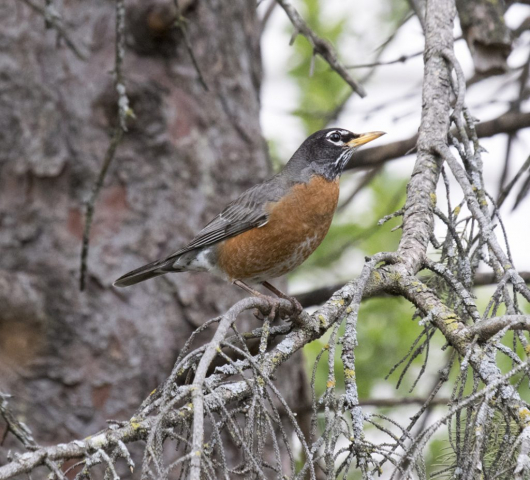