Taxonomy: There have been several recent changes in assignment of woodpeckers to genera. The only remaining species in the genus Picoides are Eurasian and American Three-toed Woodpeckers and Black-backed Woodpecker (Gill and Donsker 2017).

Nearctic three-toed woodpeckers have been split from those of the Palearctic based on genetic and vocal differences (Banks et al 2003). American Three-toed Woodpecker occurs in North America north of Mexico, with three subspecies recognized (AOU 1957): fasciatus of Alaska, western Canada and the northwestern USA, dorsalis of the Rocky Mountains from Montana south to Arizona and New Mexico, and bacatus of central and eastern Canada, south to northern Minnesota, and the northeastern US.

The Nebraska specimen cited above belongs to the Rocky Mountain subspecies dorsalis (Swenk 1918), which occurs in Wyoming and the Black Hills of South Dakota (Faulkner 2010, Tallman et al 2002).

Summer: There are three documented records. The first record below probably represents a single pair present 4 Jun 2014 through 15 Jul 2015 (see below).

16 Jun 1916, the specimen cited above, a male collected seven miles west of Scottsbluff, Scotts Bluff Co and confirmed as this species by H.C. Oberholser (Swenk 1918)

18 Jul 1994, a female which was associated with a second undescribed bird in burned ponderosa pine woodland in Smiley Canyon, Sioux Co (Gubanyi 1996, Silcock and Rosche 1994).

The sites of the 2014-2015 records were in the area of an extensive fire that occurred in Aug 2012; usually this species occupies a newly burned area for six or even 10 years (Leonard 2001), but none could be found despite careful searching 5 Apr and 24 May 2016 in East Ash Canyon, Dawes Co. It appears the bark beetle outbreak that attracted these birds Jun 2014 had died down and the birds may have moved on after only two years of residency (see Comments). There were no reports during the intervening 2014-2015 winter, although it seems likely the birds were still present.

A female was reported by Bird Conservancy of the Rockies surveyor Dave Sandahl 30 May 2019 along Milo Road, southwest of Joder, Sioux Co, but the report was not accepted by NOURC due to “lack of detail” (eBird. org; Brogie 2020). 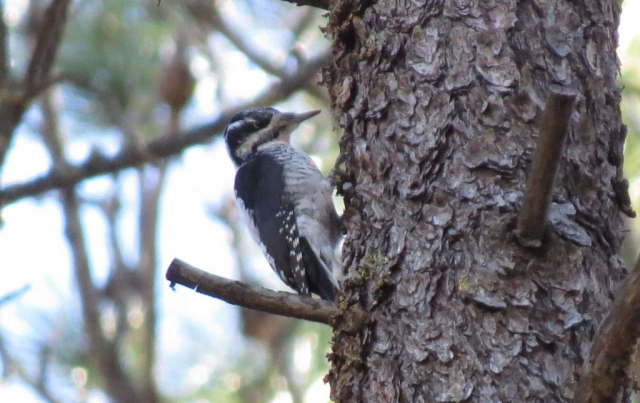