Typically, flocks arrive in late Mar, reaching peak numbers in late Apr. Early for the location was a flock of 126 at Lake McConaughy, Keith Co 5 Mar 2005, and a late flock of 136 was there 9 Jun 2007. Although most migratory movement is completed by mid-May, small groups or occasionally individuals may remain anywhere in the state throughout summer months.

Summer: Breeding colonies of White Pelicans are scattered throughout the northern Great Plains as well as in Wyoming and Colorado, but none are permanently established in Nebraska. A large colony exists just north of the state line at Lacreek NWR, Bennett Co, South Dakota.

The first large colony nesting involved the discovery by John Sidle of some 1200 nests on an ephemeral island in Wolf Lake, Garden Co in 2021; photographs were taken 6 Aug when many young were present (John Sidle, pers. comm.). Also in 2021, a colony of 75-100 nests was found mid-Jun at Island Lake, Crescent Lake NWR, Garden Co; young were hatching 7 Jul (Marlin French, pers. comm.). These two colonies appear to be related to the complete abandonment in 2021 of the large Lacreek NWR, South Dakota nesting colony, possibly due to predator pressure there resulting from lowered lake levels during winter in an effort to avoid botulism (Todd Schmidt, pers. comm.; James Ducey).

There are three additional instances of nesting, although chicks were hatched only in the 2019 event (below). Mollhoff (2005) presented information from biologist Leonard McDaniel regarding egg-dumping by pelicans in Double-crested Cormorant nests at Valentine NWR, Cherry Co, 25 May 1988 (2 eggs), 2 Jun 1991 (4), and 17 May 1993 (4), and the establishment of a breeding colony of 10 platform nests 24 May 1995; the nests were abandoned 29 May (Mollhoff 2022). On 18 Jul 2019, 37 adults and 17 chicks about 12 days old were associated with ground-nesting Double-crested Cormorants on an island at Marsh Lakes, Valentine NWR (Richard Ernst photo, Jennifer Chiu, Melvin Nenneman; Mollhoff 2022); this event was at the same location as the 1995 event (fide Wayne Mollhoff).

Migratory movement is first seen in late Jul, although in 2015 a flock of 200 was over Spring Creek Prairie, Lancaster Co 23 Jun, and 56 at were at Branched Oak Lake, Lancaster Co two days later. Numbers generally peak in Sep, but small groups may remain into winter at certain locations.

Winter: In recent years small numbers have lingered into winter; there were no Dec reports until 1977 and no Jan reports until 1991. Some lingering birds are injured, but most are not. Sutherland Reservoir has a coal-fired power plant cooling pond that remains open throughout winter; single birds were present there 15 Feb 1992 and 19 Dec 1992, and overwintering began in 1993-94 and has continued each year since. The first high tally there was the 33 on 1 Jan 2010; up to 24 wintered 2014-2015, 29 in 2017-2018, and 33 in 2020-2021. Numbers usually dwindle during Feb, although in recent years early spring arrivals have added to the number of wintering pelicans.

Overwintering was unknown away from Sutherland Reservoir until 1999-2000, when 3-4 wintered at Harlan Co Reservoir. Wintering probably occurs there occasionally; three were present 26 Jan 2002, three were there 24 Jan 2012, one was there 2 Feb 1997, and five on 1 Feb and 17 on 8 Feb in 2022. Mid-Feb reports, including the latter 8 Feb date at Harlan Co Reservoir may be of early migrants given its southerly location. Recently, wintering has occurred at Lake Ogallala, where four were present 2003-2004, with eight on 25 Jan, and 1-5 have been present in subsequent winters. An older mid-winter sighting there was 12 Jan 1991.

Comments: Conflicts between fishermen and American White Pelicans and Double-crested Cormorants have been an issue in recent years as these species have increased in numbers. This issue was explored by Dinan and Jorgensen (2014), who provided baseline count data for fall 2012 on these species in the Sandhills and concluded it was unlikely either species was negatively impacting sport fishing resources in Nebraska.

Federal banding returns indicate that bands taken from birds found dead in Nebraska were placed on juveniles that were produced in breeding colonies from virtually every Great Plains state and Canadian province, including Colorado, Wyoming, Ontario and Alberta, suggesting that American White Pelicans wander widely during their lives. However, of 101 band returns, 44 were banded in North Dakota. A dead bird found on the Calamus-Loup CBC 31 Dec 2012 had been banded as a flightless juvenile at Medina, North Dakota 8 Jul 1999; co-incidentally, a 20-year-old bird found dead in Seward Co 18 Apr 2019 was banded as a chick at Medina, North Dakota 8 Jul 1999. 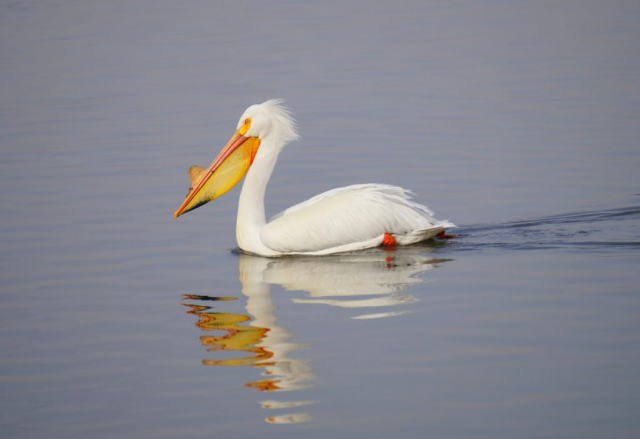 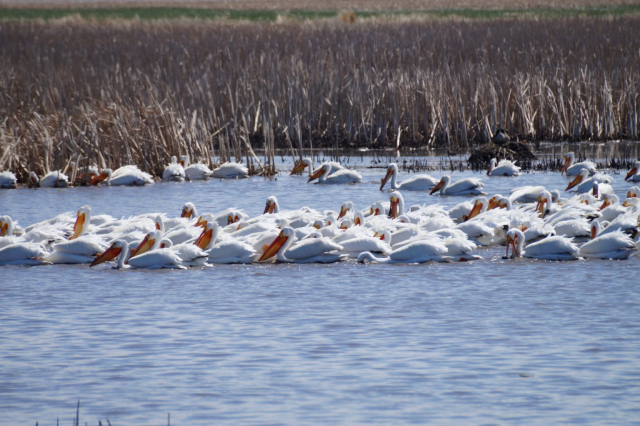 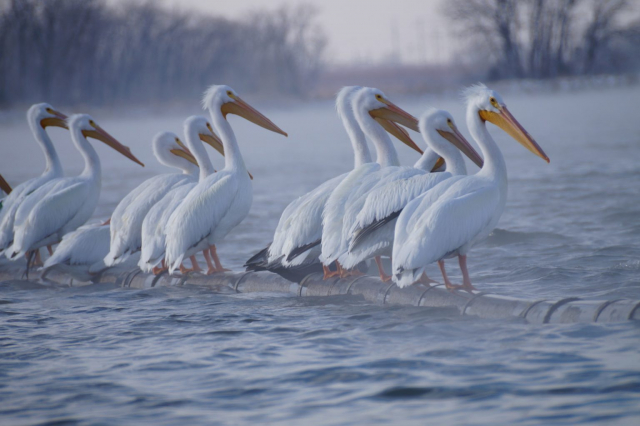 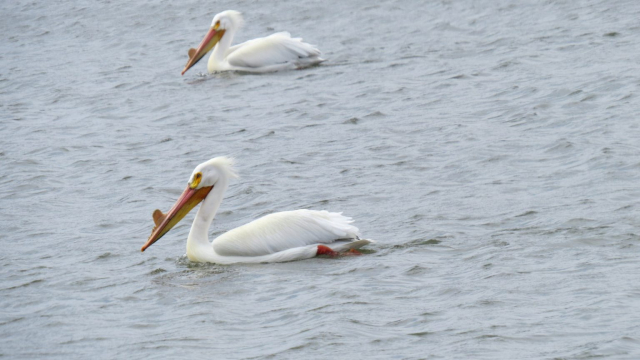