Spring: There are three accepted records:

Fall: There are three documented records and two additional reports not accepted by NOURC.

The two additional reports are as follows. A first basic bird reported with minimal details at Gavin’s Point Dam in South Dakota and Cedar Co, Nebraska 6 Dec 1998 (Tallman 2002) was not accepted by NOURC (Jorgensen 2001). This is a very unusual date for this species (or any other Sterna tern) on the Great Plains. Another at Gavin’s Point Dam 20 Oct 2012 lacked sufficient detail for NOURC acceptance (Brogie 2013). The identity of one photographed at Lake Ogallala, Keith Co 13 May 2018 was judged “inconclusive” by NOURC (Brogie 2019); however only one of several experts judged it a Common Tern rather than an Arctic Tern (Silcock, eBird.org).

Comments: Most reports from neighboring states are in the periods 12 May-18 Jun (10) and 10 Sep-9 Oct (16), corresponding with those from Nebraska, but there is a single Aug record, a late Oct record, and two Nov records. Nearest breeding records are in Montana, where an isolated pair was discovered nesting 1998-2000 (Dinsmore and Jorgensen 2000). Inland records during migration raise the possibility that at least some central Arctic breeders might follow an inland route; records late May to mid-Jun near Ottawa, Canada suggested movement from the Upper St Lawrence River to James Bay (Hatch 2020). 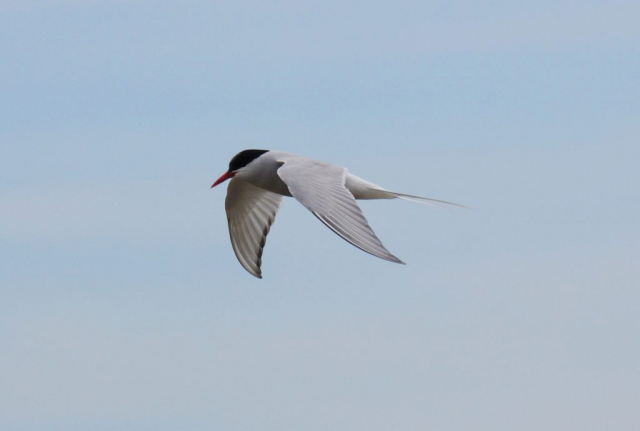