Summer: There are five documented records.

The next four records were from the same site about one mile south of Exit 1 along I-80 in Kimball Co.

A single was found 28 Jun 2007 and photographed 9-10 Jul; subsequently the presence of a breeding pair there was confirmed 15 Jul with adults feeding fledged young 18 Jul (Mollhoff et al 2008, Mollhoff 2008); the last sighting there was of a single adult 11 Aug.

At least one was photographed (Edwards, eBird.org) and recorded (Raynor, eBird.org) 19-28 Jun 2021. No evidence of breeding was reported.

There are four additional sightings in Scotts Bluff and Sioux Cos. One was in a yard near Morrill, Scotts Bluff Co 12 Jul 2009, but the sighting was not accepted by the NOURC (Brogie 2009a). Another, seen at Riverside Park, Scottsbluff, 4 Sep 2000 by an experienced observer, was also not accepted by the NOURC (Jorgensen 2002). A calling bird was identified by observers experienced with the species in Colorado in lower Sowbelly Canyon, Sioux Co 20 Jul 2000. One was well-described at Wind Springs Ranch, Sioux Co 4 May 2009.

A set of eggs collected in Otoe Co 26 Jun 1907 (UNSM ZM8555) and ascribed to Ash-throated Flycatcher is now considered to have been mis-identified and are in fact eggs of Great Crested Flycatcher (Mollhoff 2022). 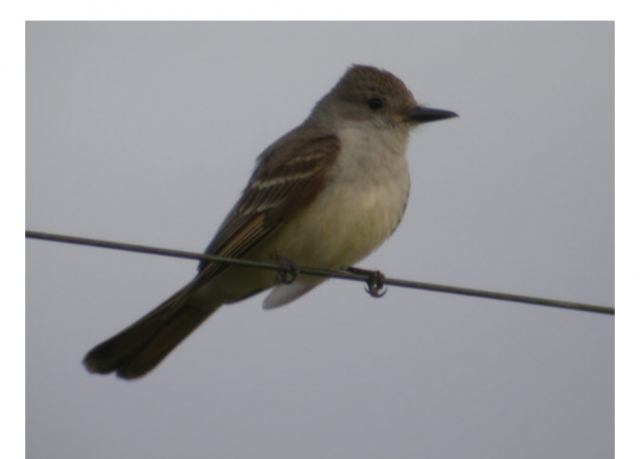