This species and Henslow’s Sparrow were moved to a new genus, Centronyx, from Ammodramus, based on genetic studies that indicated former Ammodramus was paraphyletic (Chesser et al 2018).

These reports suggest that migrants may appear statewide, and not always in expected habitat. Preferred habitat during migration is probably native prairie, especially dense shortgrass prairie (Pulich 1988) or sparse grassland with clumps of grass in well-drained areas like hilltops (Mark Robbins, pers. comm.) These habitats are most common from Sheridan and Garden Cos westward, especially in northern and northwestern Sioux Co. This species is probably regular in occurrence in such habitat, but is difficult to find, although several records involve singing males (see below and Comments). Available dates suggest a tight window of migration timing during the first two weeks of May. There is an increasing number of reliable reports from atypical habits in the east, however (see Spring).

Accepted records are as follows (the single Jun record is given above).

Easterly records follow: one was photographed at Kissinger Basin WMA, Clay Co 24 Apr 1999 (Jorgensen 2012). An amazing record was of one which was photographed by two observers at different times and remained in atypical habitat, a non-native grassy roadside near Heron WPA, a playa wetland basin, in York Co 26 Apr-10 May 1998 (Brogie 1999). The song of one near Elmwood, Cass Co 1-2 May 2001 was compared to a tape. A singing male was seen 4 and 6 May 1990 in Cass Co (Grenon 1991; Grzybowski 1990). A specimen “very critically studied” by Swenk was collected near Kearney, Buffalo Co 6 May 1914 and mounted for the Olson collection (Swenk, Notes Before 1925). A calling bird was found in a weedy abandoned alfalfa field near Creighton, Knox Co 18 May 2004. A mounted specimen collected at Juniata, Adams Co 19 May 1935 is cited above. Brooking (Notes) listed one in his collection taken by Cyrus Black at Kearney, Buffalo Co May 1917, without details; this specimen was apparently not recorded by Swenk.

Summer: Mollhoff (2022) discovered a record at the University of Kansas Biological Institute, Lawrence, of a nest with eggs (#95731) found near Warbonnet Canyon, Sioux Co, Nebraska by N. S. Goss 23 Jun 1890. It was pointed out by Mollhoff (2022) that this area is within about 20 miles of areas where migrants have been reported “repeatedly” in the latter half of May, and where “The Rosches may have run down the only known location for breeding Baird’s Sparrows in the Region, with three territorial males in Sioux, NE, June 27” (Grzybowski 1996). At the latter location, Mollhoff (2022) reported territorial males 17 and 26 May 2009 and 15-17 and 30 May 2010 but not later in spring, although there is a single Jun record, one recorded west of Highway 29 between Agate and Harrison, Sioux Co, 13 Jun 2019 (eBird.org).

In extreme eastern Wyoming, Baird’s Sparrow occurs in May and early Jun (Scott 1993), but as of 2010 there was no proof of nesting (Faulkner 2010). Since then, territorial singing males have been found at one site in extreme northern Colorado, Soapstone Prairie Natural Area, Larimer Co, and three in southeastern Wyoming, in Albany, Converse, and Carbon Cos during 15 May-30 Jul. These four sites are 55-120 miles from Nebraska, closest the Soapstone site, only 55 miles west of Kimball Co. Zach Hutchinson (post to WYOBIRDS 16 Jun 2018) pointed out two similarities between the Shirley Basin, Carbon Co, Wyoming site and the Soapstone, Larimer, CO sites: sedges are common in wet meadows and grasses are of medium height at both. Best counts at the four sites are 15 at Soapstone, Colorado, and eight in Albany Co, Wyoming.

Fall: There are few reports; Baird’s Sparrow is difficult to identify when not singing in fall. Specimen data from Colorado (Andrews and Righter 1992) and Kansas (Thompson et al 2011) show fall dates 22 Aug-14 Oct. There are more reports for fall than in spring in Wyoming; most fall dates there are in the period 25 Aug-7 Sep (Faulkner 2010).

There are many published reports, but only these are accepted: 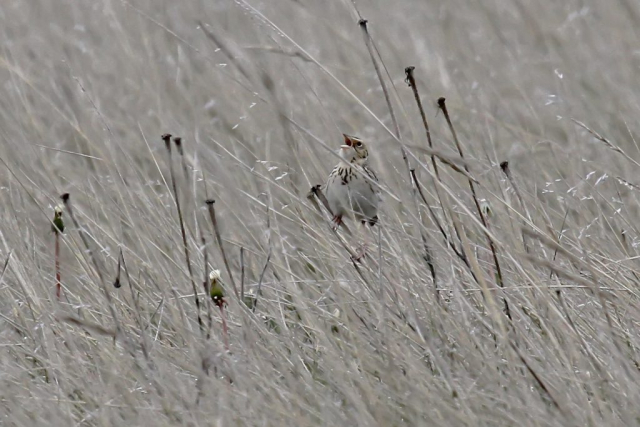