Taxonomy:  There are four subspecies recognized, including pusillus, which may soon be afforded specific status as V. pusillus Least Bell’s Vireo (Gill and Donsker 2017); the other three are arizonae of Mexico, medius of southern New Mexico and west Texas, and bellii of the central and southern USA.

Changes Since 2000:  Reports in the Panhandle have increased; there were very few prior to 2005, and about 21 since.

First arrivals are in the east, becoming progressively later westward, especially in the Panhandle. Kus et al (2020) noted that arrival is later at higher elevations and northward.

Summer: Although this species breeds statewide, it is least numerous in western Sandhills grasslands and in the Panhandle, where extensive brushy habitat is lacking; Jorgensen (2012) noted that it is also largely absent as a breeder from the Rainwater Basin because of limited habitat. However, Mollhoff (2016) showed a small number of records from this latter landscape. Overall, it is increasing in numbers; the BBS Trend analysis shows Bell’s Vireo has increased at an average rate of 4.50% (95% C.I.; 2.40, 6.62) per year statewide during the period 1966-2015 (Sauer et al 2017). BBS trend map analysis shows that increases have occurred in all areas except for the Panhandle, where there are few data. Changes in the amount and distribution of breeding habitat due to human intervention has likely attributed to local and regional increases, as the absence of disturbance regimes, such as fire, has allowed expansion of shrub habitat. Rosche (1994) noted that “inadequate stream flow” in the North Platte River channel in Keith Co has allowed dense riparian brush to return, benefitting this species in recent years. However, clearing of brush along watercourses, such as along the central Platte River, and reintroducing fire regimes tend to reduce the extent of breeding habitat.

Along the Niobrara River Valley, Kus et al (2020) depicted the range as continuous west to the Pine Ridge; it is indeed common west to NNF McKelvie, Merritt Reservoir, and Valentine NWR in Cherry Co, but between there and the Pine Ridge numbers are low; the lone two records are listed below under western Sandhills.

Departure in the north is completed by early Sep, and in the south and east by mid-Sep. 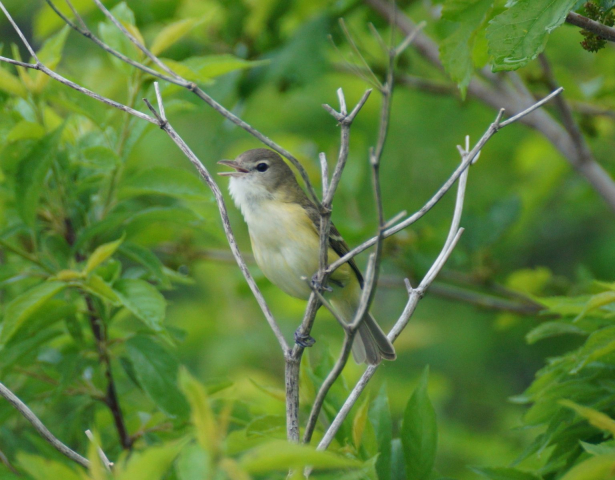