Taxonomy: Kennedy and White (2020) revised the ranges of the 15 subspecies (two are extinct), including these four that might occur or have occurred in Nebraska: pulichi, largely resident across most of Kansas, Oklahoma, and, presumably, north-central Texas, perhaps extending east into western Missouri, bewickii, breeding from northeast Kansas and southern Iowa east through southern Ontario and central Ohio to central Pennsylvania and south to northern Arkansas east through northern Alabama to central South Carolina, cryptus, largely resident east of the Rocky Mountains from eastern Colorado through Oklahoma panhandle and much of west, central, and southern Texas to northern Nuevo León, and eremophilus, largely resident from eastern California, southern Nevada, southern Utah, southwest Wyoming, and Colorado south to northern Sonora, Chihuahua, Durango, and central Zacatecas.

Although the ranges of subspecies described above do not specifically include Nebraska, occasional occurrences of Bewick’s Wren might be expected in the southwest (cryptus), south (pulichi), and southeast (bewickii).

AOU (1957) included southeast Nebraska in the breeding range of bewickii, presumably based on a single report by Aughey of adults feeding young in Otoe Co 12 Jun 1875 (Bruner et al 1904). As stated by Sharpe (1993), we have doubts about many of Aughey’s reports. It is interesting that the decline of subspecies bewickii in the eastern United States beginning in the 1920s, continuing through the 1970s, with the result that “most of eastern population was gone by 1980” (Kennedy and White 2020), coincides with the disappearance of summering Bewick’s Wrens in Nebraska.

A specimen purportedly collected 21 Apr 1915 near Oshkosh, Garden Co by C.A. Black was examined by H.C. Oberholser (Swenk 1918, 1933), and determined to be of the southwestern United States race eremophilus. The specimen cannot now be located (Bray et al 1986). Possibly based on this specimen, Swenk (1933) suggested that eremophilus (presumably present day cryptus or pulichi) occurred in western Nebraska as a summer resident. We believe that it is unlikely that this specimen was collected in Nebraska; there is but a single documented record for Colorado, in Larimer Co 14 Apr 2006 (CBRC).

All dates in the literature are included above, although some are undocumented.

Bewick’s Wren is generally sedentary, although birds at the northern edge of the breeding range are migratory. About half of the Nebraska reports are from the 1950s and 1960s; there are only about 23 reports since 1969. Most of these are in spring, but there are two winter reports, and a few others divided between summer and fall.

Summer: There is no indication that Bewick’s Wren ever bred regularly in Nebraska although it breeds regularly in Kansas north to within about 80 miles of the Gage Co, Nebraska, area (Busby and Zimmerman 2001).

Where it is common in Missouri and Arkansas, Bewick’s Wren occurs around abandoned farm buildings, junk piles, and brushy edges of woods (Robbins and Easterla 1992, James and Neal 1986). These authors believe that cleanup of such sites in recent years has contributed to the decline in Bewick’s Wren populations in the eastern United States, but it seems more likely that the decline is due to competition with the more aggressive House Wren (Kennedy and White 2020).

Nesting reports for Nebraska are not well-documented. Nevertheless, there are seven, all in the southeast, but none since 1969. Mollhoff (2022) accepted three nesting records.  The first was Aughey’s 12 Jun 1875 report of adults feeding young in Otoe Co, discussed above and by Swenk (1933) and considered doubtful by us. A 1952 nest in Peru, Nemaha Co had four nearly fledged young 1 Jun (Gates and Gates 1953), and a female nested (sterile eggs) in the garage on the Einemann farm near West Point, Cuming Co 7 Jun 1969 (Larry Einemann, personal communication).

Additional reports suggestive of breeding activity follow. At least one of an unsuccessful pair in Hastings, Adams Co in spring 1931 (Swenk 1933; Rapp et al 1958; Jorgensen 2012) had wintered in the area (see Fall). A pair summered 16 May-23 Aug 1944 in Hastings, although nesting was not confirmed (Jones 1944). A nest in Brownville, Nemaha Co in 1959 was successful, the birds staying until the first week of Jul (Wensien 1960). The most recent breeding reports are from Gage Co, some time prior to 1970 (Fiala 1970), but no details were given.

Fall: There are few reports, all but one in Sep and Oct, and generally in the east except for two from Lincoln Co. The most recent reports are from Otoe Co in 1994 and Harlan Co in 1998. Thompson et al (2011) stated that Kansas reports suggest “considerable dispersal during late summer”.

Comments: There are four reports which suggest attempted wintering, none of which appear to be conclusive. These are: one in Scotts Bluff Co 27 Jan 2009 (Brogie 2011), one photographed 15 Dec 2012 in the same Scottsbluff yard as the bird photographed there 27 Jan 2009 (CM) but considered by NOURC to be a Carolina Wren (Brogie 2013), one which appeared in Kearney, Buffalo Co 30 Dec 1930 and subsequently wintered (Swenk 1933), and one which appeared in North Platte 21 Jan 1933 and remained until 30 Mar (Tout 1947). A request for opinions by experts on the ID Frontiers website (https://listserv.ksu.edu/birdwg01.html; accessed Feb 2017) on the 2009 and 2012 Scottsbluff reports resulted in mixed opinions for each species (Bewick’s and Carolina Wren) on each of the reports. 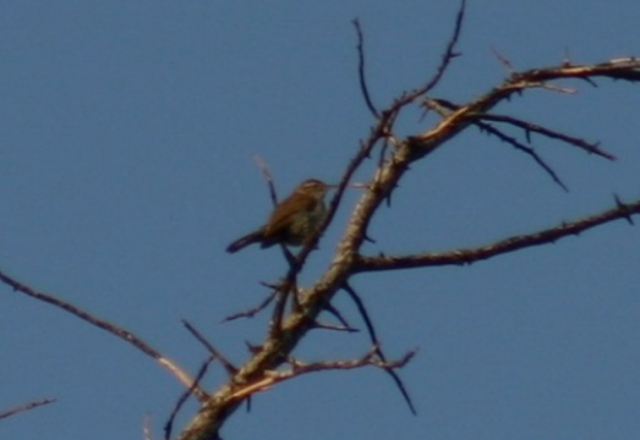