A possible Nebraska hybrid is discussed in Comments.

Summer: There are 26 documented records,18 of these 2019-2022, indicating the steady increase in records since the first in 2012. Two are from the east and two in the central:

Prior to the first record cited above, a female Archilochus hummingbird was observed at Kimball, Kimball Co 4 Aug 1996 (Grzybowski 1997) but not identified to species. A report of one at a Lake McConaughy feeder 28 Jul 2013 was not accepted by NOURC due to insufficient detail shown in the photograph submitted. A report including video of one in a Douglas Co yard 21 Aug 2015 (see Comments) was not accepted by NOURC based on an expert opinion that the evidence did not allow conclusive identification (Brogie 2016). Two “young birds” in a well-known hummingbird yard in Scotts Bluff Co 12 Aug 2016 were thought to be this species, but were not photographed (eBird.org). A report of one in a Scotts Bluff Co yard 15 Aug 2017 was not accepted by NOURC due to “lack of detail” (Brogie 2018), but was likely correct. An immature photographed at the Croft feeders, Scotts Bluff Co 19 Sep was judged to be a Ruby-throated Hummingbird (eBird.org; Brogie 2019), while earlier at the same feeders, an immature Black-chinned Hummingbird was present at least 25-29 Aug (eBird.org); one or both of these immatures were present during 25 Aug-21 Sep (Colin Croft, eBird.org).

A puzzling bird with a strongly decurved bill present in Lincoln, Lancaster Co 30 Jun-17 Aug (fide Michael Willison) was determined to be this species by Sheri Williamson albeit having a bill that was “on the decurved end of the bell curve”.

Comments: A videotape of what was thought to be a possible hybrid with Ruby-throated Hummingbird, taken in Omaha, Douglas Co 21-23 Aug 2015, was sent to experts Steven Mlodinow and Sheri Williamson (Justin Rink, pers, comm.). Both agreed that the bird was at least a “probable” Black-chinned Hummingbird; Williamson noted: “I see … a probable female Black-chinned. Apparent lack of a tail notch is a further point of evidence in favor of Black-chinned …; she doesn’t pump her tail when hovering between feeding bouts, but that’s not an infallible Black-chinned characteristic.” The report was judged “Not Accepted” by NOURC based on uncertainty of the identification (Brogie 2016).

An idea of the current (Fall 2015) abundance of Black-chinned Hummingbird in western Kansas comes from a veteran observer, Tom Shane: “… we finally had a nice wave of Archilochus hummingbirds arriving on 8 Sept 2015. … I am guessing we had a ratio of 70 BCHUs to 30 RTHUs. We still had 2 Black-chins and one probable Ruby-throat today 3 Oct 2015. Black-chins nested this year 30 miles west of the Kansas – Colorado line in Lamar, CO. We have not had an adult male BCHU here in Garden City in a number of years.” Joseph Grzybowski (pers. comm.) noted in 2019 for Oklahoma “In 1993, there was a surge of Black-chinned Hummingbirds into the Wichita Mountains at least” and “In recent decades Black-chinned Hummingbirds began to expand into central Oklahoma such that one can no longer assume a hummingbird in, say, Oklahoma City or Cleveland County is a Ruby-throated.” 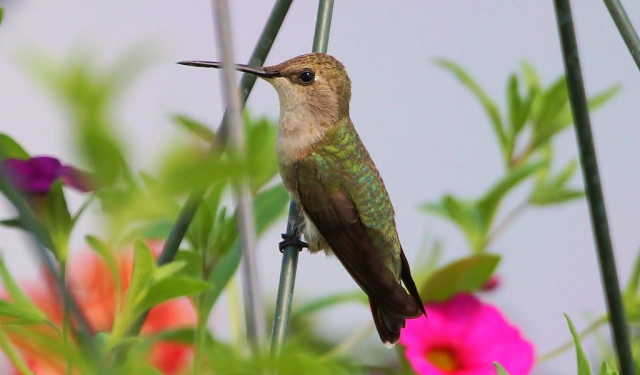