Taxonomy: Two or three subspecies are recognized, only one in North America, mexicanus; the others occur in Hawaii and South America (Pyle 2008).

Changes Since 2000: This species began breeding sporadically in Nebraska in the 1980s, but since 2000 breeding has occurred every year in the western Sandhills and has occurred with increased regularity, albeit not annually, in the Rainwater Basin.

Summer: Prior to 1970, this species was casual in occurrence in Nebraska with only about nine reports (Sharpe et al 2001). During the 1970s and early 1980s, reports increased, primarily in western areas in spring, with eight records east to Cherry, Dawson, and Lincoln Co, as well a single eastern record in Lancaster Co 28 Apr 1981. Since 1988, Black-necked Stilts have been reported regularly.

Breeding was reported for the first time in Nebraska in 1985 when young were observed 11 Jul at two locations at Crescent Lake NWR, Garden Co (Helsinger 1985) and again in 1987 (Huber 1987). Also in 1987, Mollhoff (2022) found two nests with eggs at Lakeside, Sheridan Co 4 Jun. Nesting has continued since in Sheridan and Garden Cos, with most reports from the Lakeside area in Sheridan Co and Crescent Lake NWR. As many as six nests with eggs were found near Lakeside 16 May-6 Jun 2000 (Farrar 2001, Mollhoff 2004) and a systematic survey of lakes in Sheridan and Garden Cos specifically for Black-necked Stilts yielded observations of 28 breeding adults, 22 chicks and 35 non-breeding adults (Wells 2004). Five nests were found at Crescent Lake NWR in 2007 (Mollhoff 2008).

Nesting has not been documented in Cherry Co, although a pair was seen 25 Jun 1999, another pair was photographed 2 Jul 2013, and two were a few miles south of Merritt Reservoir 5 Jun 2021. There is a report of a nest with eggs photographed in “northern Nebraska” in 1994 (Loren Blake, letter to NGPC Heritage Program).

In the Rainwater Basin, reports began in the late 1990s, when there were sightings at Funk WPA, Phelps Co 11 Jun 1996, 5-10 Jun 1997, and 1-3 on 11-18 Jun 2000, and 2-10 Jun 1997 in Seward Co (Jorgensen 2012). Breeding was successful at Funk WPA in 2003, when two adults with two young were seen 21 Jul-16 Aug (Drahota 2003). Nesting was reported again at Funk WPA in 2007 and 2008 (Mollhoff 2008). In 2005, multiple nests as well as several additional sightings involving more than 25 birds occurred in the eastern portion of the Rainwater Basin following heavy rains that filled wetlands, including some that were recently renovated; these were the first breeding records there (Jorgensen and Dunbar 2005). The 2005 event included nesting at Harvard WPA, Clay Co, Trumbull Basin in Clay Co, and Spikerush WMA, York Co (Jorgensen 2012). A nest with four eggs was found at Sinninger WPA, York Co 18 Jun 2016, and, based on the actions of the adults, young may have been present 9 Jul; however, the wetland was dry by 28 Jul when no stilts were observed, and the outcome of the nesting is unknown. One was on a nest in York Co 25 Jun 2021 and a pair was at Harvard WPA, Clay Co 18 Jun 2021. Breeding in the Rainwater Basin has been sporadic and usually follows heavy rainfall events, however none were observed nesting in 2015 (Jorgensen 2016).

A pair with eggs was near Crawford, Dawes Co 28 May 1994, but the outcome was not reported (Silcock and Rosche 1994). A pair of protective adults and 4-5 chicks were seen at County Road F Pond, Scotts Bluff Co, 20-22 Jul 2002, but, while the presence of avocets made the identity of the chicks uncertain, it seems likely that breeding occurred. Breeding indeed occurred in 2003, when a juvenile was seen with adults 11 Aug, and in 2004, when two pairs fledged at least one brood; incubating birds were first seen 22 May. Since then, however, this pond has been modified and stilts no longer breed there as of 2016. Among 14 stilts at Kiowa WMA, Scotts Bluff Co 11 Jul 2011 were two half-grown chicks.

Along the western Platte River Valley, nesting was noted at the Grand Island SL, Hall Co in 1998, but the outcome was not reported. Likely non-breeding immatures were 1-5 at North Platte WTP, Lincoln Co 5-20 Jun 2021. A defensive male with a fledgling 29-30 Jul 2000 at the west end of Lake McConaughy where a pair had been seen in Apr led the observer to conclude there was “no doubt nesting occurred there”; an immature was still there 11 Sep. Seven birds at Bittern’s Call WMA, Dawson Co 27 Aug 2008 included a newly-fledged juvenile likely produced there; one bird was there 12 Sep and at neighboring cattle feedlot waste-control ponds at least one nesting pair was present 2 and 5 Jul 2009.

In 2011 a surprise both by the late date and easterly location was the discovery of two nesting pairs in a flooded field in Dakota Co; two birds were seen 21 Jul and the nests were found later the same day. By 28 Jul there were nine birds in the area and incubation was ongoing 30 Jul. Of the two nests started, one had dried out and was abandoned and the other had four eggs by 2 Aug; the first downy young was seen 6 Aug and two in juvenile plumage were noted 6 Aug. Birds were still present 27 Aug, when an adult and three juveniles estimated to be 24 days old were seen.

Flocking and wandering begins in mid-Jul, and most depart by mid-Aug. 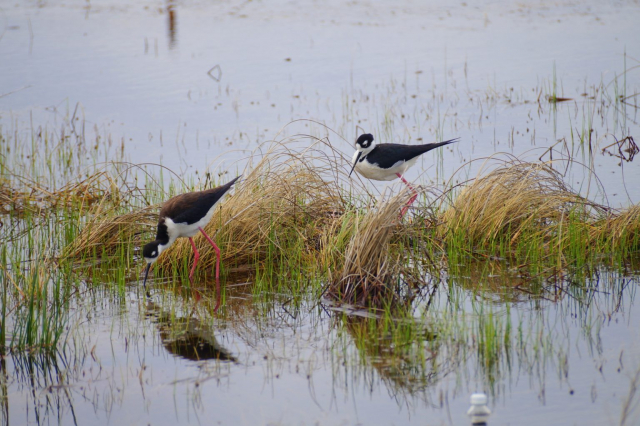 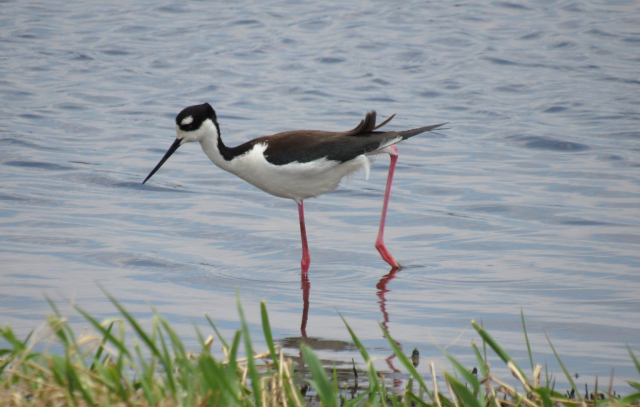 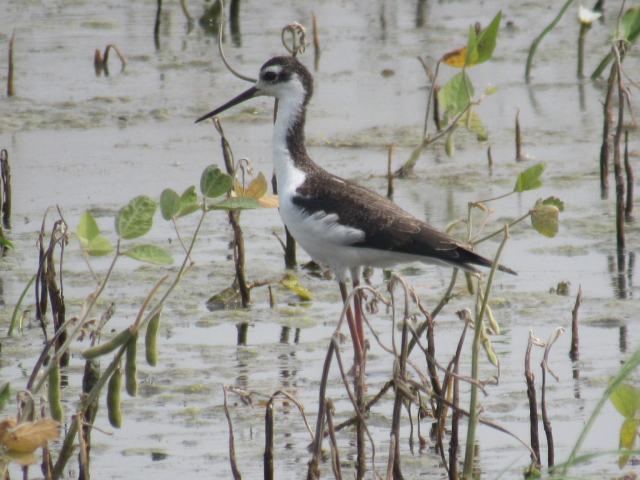 Photograph (top) of a pair of Black-necked Stilts near Antioch, Sheridan Co 20 May 2018 by Joel G. Jorgensen.