Until the 1990s, the only subspecies occurring in the state was eastern caerulea (Rapp et al 1958), but since then western obscura has spread into western Nebraska from the Rocky Mountains. Faulkner (2010) stated that the species (subspecies obscura) had expanded markedly in Wyoming since the mid-20th century.

Changes since 2000: In the late 1990s a rapid increase in numbers in the Panhandle began, and since then this species has expanded dramatically to occupy most pine woodland habitat in western Nebraska, including much of the central Niobrara River Valley but not the Sandhills.

Arrival in the east is mid- to late Apr and in the west in early May.

Following the discovery of breeding in Kimball Co in the late 1990s (see Summer), numbers of spring migrants in the west have increased rapidly. In 1998, 13-15 were found each spring until by 2001 it was becoming “widespread and almost common in the Panhandle” (Stephen J. Dinsmore, personal communication).

As a migrant, it is least numerous in central Nebraska, as might be expected with stable numbers in the east and increasing numbers in the Panhandle, although numbers in the central in spring have also increased dramatically since 2000. It was still a “rare spring transient” 22 Apr-3 Jun in the Keith Co area (Brown and Brown 2001) at about the same time numbers were increasing rapidly in the Panhandle. Similarly, it was listed as a “Casual spring and fall migrant”, but increasing, in the Rainwater Basin, where Jorgensen (2012) listed 17 total spring reports 9 Apr-25 May. Among the first spring records in central Nebraska were singles in Hitchcock Co 5 May 2003, Buffalo Co 10 Apr 2005, and Garfield Co 15 May 2005.

Summer: Prior to the late 1990s, this species was confined to the east; Bruner et al (1904), Rapp et al (1958), and Mollhoff (2001a) showed an essentially unchanged distribution for some 100 years primarily in the southeast, although Mollhoff (2001a) stated that it was reported “at scattered sites along the Missouri River as far as its confluence with the Niobrara River”. During 2006-2011, however, breeding reports increased in the Missouri River Valley north and west to Dakota and Knox Cos (Mollhoff 2016). The only reports north and east of the Elkhorn River Valley in 1984-1989 were one each for Dakota and Knox Cos (Mollhoff 2001a), but during 2009-2014 there were 13, presumably eastern birds consolidating their range. One of 2-4 birds at Ashford Scout Camp, Thurston Co, was carrying food 11 Jun 2006, the first breeding record in the extreme northeast. Reports increased in Seward, Saline, and Jefferson Cos also (Mollhoff 2016), although it is absent in summer in the Rainwater Basin, where habitat is unavailable or very limited (Jorgensen 2012).

Blue-gray Gnatcatcher has been expanding its range northward along Colorado’s eastern foothills for some time, apparently part of a general shift northward there during the last three decades (Hitch and LeBurg 2007, Kershner and Ellison 2020). The first records of this western population reaching Nebraska were on 19 Jun 1993, when a single territorial bird was found in limber pines in western Kimball Co (incorrectly cited 16 Jun in Grzybowski 1993), and another was there 24 Jun 1995. A family group was seen in the same area, including adults feeding dependent young 22 Aug 1999, and four nests with eggs were located there 10-11 Jun 2000 (Mollhoff 2001b). Expansion of the western range northeastward is discussed below.

Mollhoff (2022) pointed out that western birds are found in pines and eastern birds in deciduous forest.

In the Niobrara River Valley, Mollhoff (2001a) had stated that it was reported “at scattered sites along the Missouri River as far as its confluence with the Niobrara River”, and Ducey (1989) suggested that this species was “extending its range into the lower Niobrara Valley” and would be “expected to breed there”. However, the only indication of westward spread in the Niobrara River Valley beyond Knox Co prior to 2007-2009 is a single record from Holt Co 4 Sep 2006; except for this record there was a gap in reports between Knox Co and northeast Cherry Co until 2015. It is more likely, based on first report dates, that gnatcatchers reached northeastern Cherry Co from the southwest via Crescent Lake NWR and NNF Bessey in Thomas Co. The first Crescent Lake NWR report was in 1999, and there were numerous reports there beginning in 2008 and at NNF Bessey beginning 21 May 2009. One was at Hyannis, Grant Co 17 May 2009. The first reports in northeast Cherry Co were of one there 25 Aug 2007, two at Fort Falls 18 Aug 2008, and one at Fort Niobrara NWR 22 Sep 2009. The gap in reports mentioned above in the Niobrara River Valley east of Cherry Co was closing by 2015, however, as there were reports suggestive of western birds moving eastward; there were several sightings of up to four between Fort Niobrara NWR and the Niobrara Valley Preserve, Brown and Keya Paha Cos 14-29 Jun 2015, and one at Fred Thomas WMA, Rock Co 29 Jun 2019. Nesting was reported at Fort Niobrara NWR, Cherry Co in 2021 (Renee Tressler, pers. comm.)

In the Platte River Valley, prior to the arrival of western birds in the 1990s, there had been two westerly reports of presumed vagrant eastern birds; a Lincoln Co specimen UNSM ZM6707 taken 22 Apr 1937, listed as caerulea (Tout 1947), and an 11 Jun 1985 report. A female in breeding condition netted at Cedar Point Biological Station, Keith Co, 3 Jun 1993 (Rosche 1994) was not identified to subspecies. A nest found there in 2010 was claimed as “the first nest of Blue-gray Gnatcatcher (Polioptila caerulea) in western Nebraska” (Barcelo and Faaborg 2012), although it was preceded by those described above in Kimball Co. The 2010 Keith Co nest was parasitized by a Brown-headed Cowbird and the pair apparently re-nested (Barcelo and Faaborg 2012, Brown et al 2012). It is currently (2016) a regular, localized breeder in low numbers in the Lake Ogallala area, Keith Co (Mary B. Brown, personal communication). Reports are now increasing slowly eastward, although there are only three between Dodge and Dawson Cos, all since 2013: 14 Jun 2019 in both Hall and Buffalo Cos, and 27 Jul 2013 in Buffalo Co. The documented eastern range extends west only to the Fremont area, Dodge Co; two near Royal, Antelope Co 4 Jun 2017 may have been spring migrants.

In the Republican River Valley, eastern birds appear to have been established prior to the arrival of western birds; a territorial pair was seen in riparian woodland south of Orleans, Harlan Co 6 Jun 1990, three were there 23 Jun 1996, and another on 20 Jul 2000. More recent westerly reports, such as singles at Swanson Reservoir, Hitchcock Co 5 May 2003, at Oxford, Furnas Co 30 Apr 2006, and in Frontier Co 10 Jun 2009 (Brogie 2009) and 25 May 2010, were probably western birds.

Departure is usually completed by late Sep in both east and west. 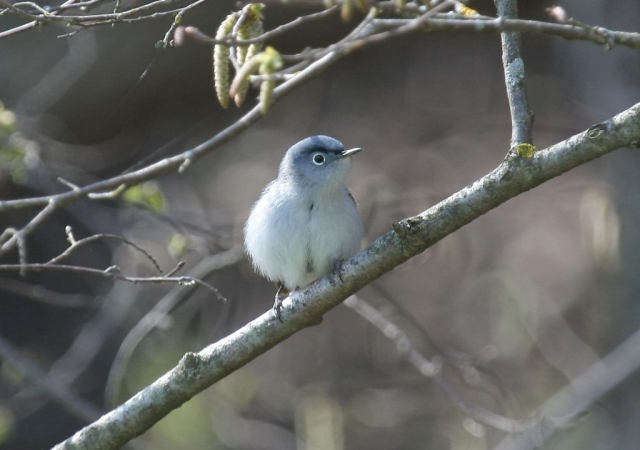 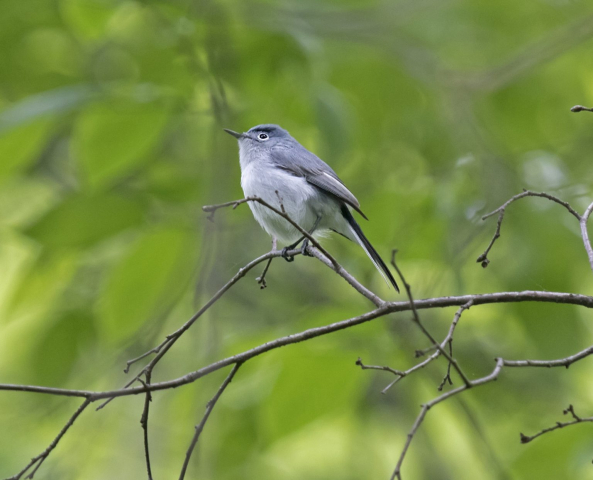 Barcelo, I., and J. Faaborg. 2012. Expansion of the breeding range of the Blue-Gray Gnatcatcher (Polioptila caerulea) Into western Nebraska. Southwestern Naturalist 57: 478-479.