Two subspecies have been reported to occur in Nebraska, but available information regarding occurrence of caerulea is conflicting. AOU (1957) stated that interfusa occurred east to east-central Nebraska and did not list the eastern race caerulea as breeding in the state. Dinsmore et al (1984) thought that the Blue Grosbeaks breeding in western Iowa were also interfusa, which coincides with the opinion of Bruner et al (1904) and Oberholser (DuMont 1934) that western lazula (= interfusa) bred statewide. However, eastern caerulea was listed as occurring in “the eastern part of the state” by Rapp et al (1958), in southeast Nebraska by Lowther and Ingold (2020), and in eastern Kansas by Johnston (1965), and has been stated to breed “north sparingly to … Nebraska” (Dwight and Griscom 1927). However, Pyle (1997) noted that birds breeding at the western edge of the range of caerulea have been separated as mesophila, but that mesophila is not a valid taxon, being an intergrade population of interfusa and caerulea. Thus, it appears that Blue Grosbeaks in eastern Nebraska are most likely to be intergrades, except perhaps in the extreme southeast; there is no evidence, however, that pure caerulea occurs.

Summer: BBS and BBA data (Sauer et al 2017, Mollhoff 2016) indicate relatively even distribution statewide; it is probably least numerous in the southeast and parts of the western Sandhills. Johnsgard (1980) indicated that breeding is “highly local” in eastern counties. Jorgensen (2012) considered it more numerous in the northern parts of the eastern Rainwater Basin and “much less common or absent” to the south. However, Mollhoff (2016) showed an increased number of blocks where the species was detected in this region, and other areas of Nebraska, between the first and second BBA projects. BBS trend analysis show Blue Grosbeak has increased statewide 1.82% (95% C.I.; 0.40, 3.30) annually 1966-2015 (Sauer et al 2017).

Departure is completed by late Sep. 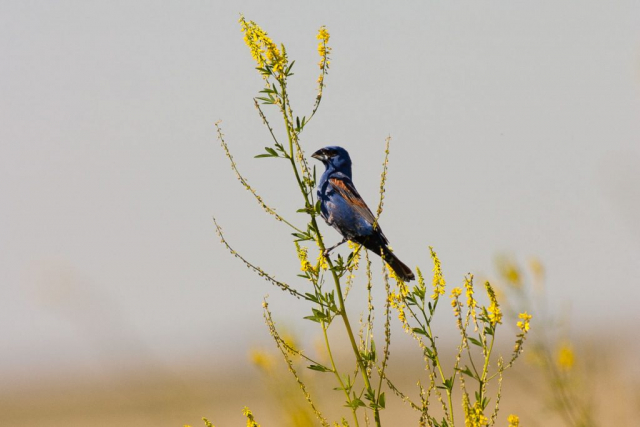 Dwight, J., and L. Griscom. 1927. A revision of the geographical races of the Blue Grosbeak (Guiraca caerulea). American Museum Novitates No. 257.