Taxonomy: Four subspecies are recognized by Gill and Donsker (2017) and Clements et al (2017), although Pyle (1997) merged one of these, semplei, with cristata. The four are: bromia from central Alberta and northeast Nebraska to Newfoundland and south-central Virginia, cristata resident (Pyle 1997) from southern Illinois to southeast Texas east to southwest Virginia and Florida, semplei of south Florida, and cyanotephra, resident (Pyle 1997) from southeast Wyoming to New Mexico and east to Nebraska and south Texas.

Thus, there are two subspecies breeding in Nebraska, bromia in the northeastern corner and presumably the eastern edge of Nebraska, and the southwestern race cyanotephra occupying the remainder of the state “so far as known” (AOU 1957, Phillips 1986). As pointed out by Faulkner (2010) for Wyoming, however, the westward spread of this species in Nebraska (see Summer) renders the current western limit of bromia in Nebraska uncertain. Smith et al (2020) suggested that “Westward expansion in the Great Plains and front range of the Rocky Mtns. is probably the result of dispersal from eastern populations.”

Resident: As stated above (see Taxonomy), both breeding subspecies in Nebraska are resident (Pyle 1997). There is, however, a strong migration in spring and fall, presumably bromia from northern parts of its range and probably also many northern Nebraska breeders. Smith et al (2020) indicated that probably fewer than 20% of Blue Jays, even in northern parts of the range, migrate. Banding data depicted in Thompson et al (2011) suggest movement of birds through Nebraska (although not necessarily Nebraska breeders); five of 12 recoveries in Kansas were of birds banded in Nebraska, and one banded in Kansas was recovered in Manitoba, Canada.

Spring: Because birds are present all year, migration dates are difficult to determine. Spring migrants tend to be inconspicuous, unlike in fall, but most move through in late Apr and the first half of May. A migrating flock of 50 was in Butler Co 21 Apr 2012. A “first-of-year” single arrived in Bassett, Rock Co 20 Apr 2008.

Summer: This species breeds statewide but is least numerous in the Panhandle. It requires the presence of trees but apparently avoids coniferous woodland (Rosche 1982), and so occurs in cities and towns as well as open areas.

Blue Jay was spreading “rapidly” westward around 1900 (Bruner et al 1904), apparently in response to an increase in riparian woodland and maturing plantations associated with western farmsteads, ranches, and especially urban settings. Even then, however, it occurred over the “entire state,” although it was “uncommon westward” (Bruner et al 1904). Tout (1947) considered it a “common summer resident” in Lincoln Co. The earliest specimen from the Panhandle is 7 Oct 1920 (UNSM 7628), taken in Monroe Canyon, Sioux Co, although it was first recorded in Colorado in Yuma Co in 1903 (Andrews and Righter 1992).

Fall: Fall migrants are conspicuous, often occurring in large flocks. Peak movement is in late Sep and early Oct and migrants are unreported after 17 Oct, although Kent and Dinsmore (1996) stated that fall migrants are reported in Iowa mid-Sep through late Oct. Some fall migrants probably originate in Nebraska (see Winter).

Winter: Most Nebraska Blue Jays are resident, but the species is sensitive to adverse winter weather and may move southward or merely “wander about” (Tout 1947) if necessary, even regularly in some parts of the state. At the beginning of the 20th century, most Blue Jays left the state in winter (Bruner et al 1904); Ludlow (1935) listed this species as a “common summer resident” in Webster Co, with no mention of records Dec-Mar, and Tout (1947) listed it as a “common summer resident” in Lincoln Co, occurring between 20 Apr and 27 Nov. In the northwest it is absent in some winters (Rosche 1982), and it tends to be absent in winter in parts of Holt Co where it breeds, reappearing in early May (Blake and Ducey 1991). Brogie and Mossman (1983) did not see Blue Jays until 30 Apr in the Niobrara Valley Preserve, and the first for the year appeared at James Ranch, Sioux Co, 11 May 1995.

Currently however, since the generally resident bromia has spread westward across the state, this pattern might be reduced in extent, although CBC data indicate that by late Dec, few Blue Jays remain in the north. High CBC counts include 353 at Lincoln, Lancaster Co 18 Dec 2010 and 350 there 14 Dec 2014. High single-observer counts are 81 in a Lancaster Co yard 13 Jan 2017 and 73 at a pond at Wyuka Cemetery, Lancaster Co 13 Feb 2019. 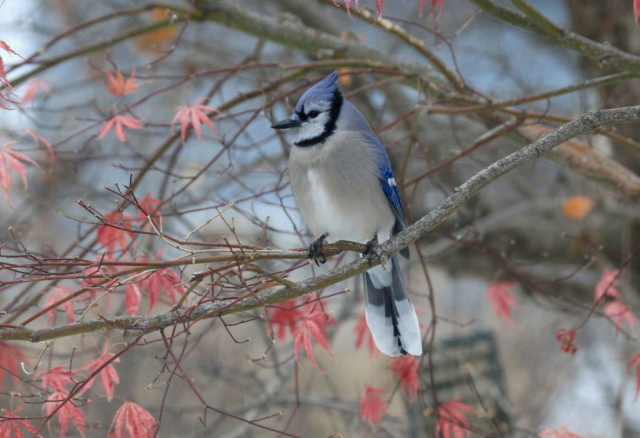