Taxonomy: Of seven recognized subspecies, all but one occur in Eurasia; the lone North American subspecies is richardsoni (Gill and Donsker 2017).

The Nebraska record is presumed to be of richardsoni.

Record: There is one record.

Of four reports, only one is documented: a specimen on display at the Hastings Municipal Museum was collected by Clyde Ley near Inland 5 Oct 1916 and described by Swenk (Bray et al 1986).

Comments: The Boreal Owl breeds close to western Nebraska in southeast Wyoming and north-central Colorado; it is considered nomadic (Hayward and Hayward 2020), and so it seems possible that birds may reach Nebraska from Colorado or Wyoming in severe winters. However, all records from neighboring states are from eastern South Dakota and Iowa, likely originating from Minnesota. There are four from South Dakota, all near the eastern border, Aug-Jan (Tallman 2002), and about 10 for Iowa, all but two (Nov and “spring”) prior to 1915 (http://iowabirdrecords.org/Reports). In Minnesota, this species stages occasional invasions, during which birds appear mid-Jan through Mar, and are usually emaciated (Janssen 1987). Since 1976, a consistent fall migration has been detected in Minnesota, beginning in Oct (Janssen 1987). 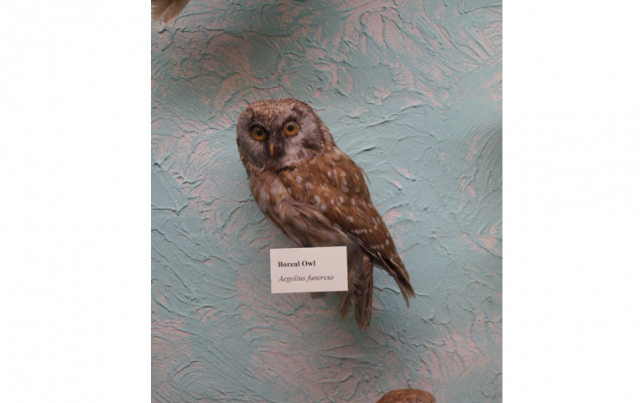 Photograph (top) of Boreal Owl mount by Joel G. Jorgensen. The specimen is housed and maintained at the Hastings Municipal Museum and may be the specimen purportedly collected at Inland, Clay Co 5 Oct 1916. We thank Teresa Kreutzer-Hodson for facilitating the photographing of this specimen for the Birds of Nebraska – Online.