Winter: There are three accepted records:

The first record was of a female that appeared at the feeder of Dean and Phyllis Drawbaugh in Scottsbluff 14 Apr 1999 and remained until 19 Apr (Dinsmore 2000). A female attended a southeast Lincoln Co cedar canyon feeder 14 Dec 2014-31 Jan 2015; it was with a Dark-eyed Junco flock of about 50 and absent for periods when the weather was suitable for the flock to forage elsewhere (Silcock 2015). Another attended a Bellevue feeder 6-10 Jan 2017 (Padelford and Padelford 2017); it was a male molting into alternate plumage. Probably the same bird was photographed at another Bellevue yard about four miles from the Padelford residence 16 Jan (Loren and Babs Padelford, personal communication).

One was seen by several of the Rowe Sanctuary personnel at a feeder in Hall Co 8 Apr 2006; it was described as a female, but the report was not accepted by NOURC, despite being “very suggestive” (Brogie 2007).

Comments: There are numerous records of this species in North America, all in the period Oct-Apr, mostly from northern and western states and Canada (Mlodinow and O’Brien 1996, AOU 1998). The first Nebraska record was part of an irruption into British Columbia and the northwestern United States which involved about 17 records in the period 28 Oct 1998-24 Apr 1999. 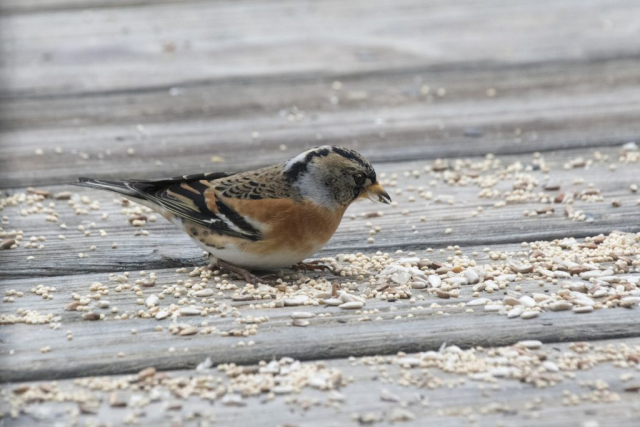