Taxonomy: No subspecies are recognized (Jaramillo and Burke 1999, Gill and Donsker 2017), although Pyle (1997) recognized three weakly-differentiated subspecies, minusculus of coastal Oregon and California, brewsteri, breeding from northwest Territories to northern Oregon and Wisconsin, wintering from California to Georgia, and cyanocephalus, breeding from Oregon to California east to southern Wyoming and northern New Mexico, wintering to California and south Texas.

If these subspecies are recognized, cyanocephalus is the Nebraska breeding subspecies, and both it and brewsteri migrate through the state.

Changes since 2000: Brewer’s Blackbird has expanded its breeding range southward in the Panhandle since 2007; for many years it bred only on or near the Pine Ridge. This expansion is probably related to expansion of the breeding populations in southeast Wyoming and northeast Colorado which adjoin the Nebraska border.

Earlier dates central and east of probable early migrants are 12 Feb 2015 two in a blackbird flock at Branched Oak Lake, Lancaster Co, and 23 Feb 1985 Boone Co. Other Feb dates are discussed in Winter, below.

As with other Nebraska “blackbird” species, migration begins around early Mar, and peak migration probably occurs in mid- to late Apr (Rosche 1994). Away from the breeding range, migration ends by late May, when most birds are at breeding sites.

It has been noted this species does not usually occur in mixed flocks with other blackbird species (Rosche 1994, Jorgensen 2012). In the east, it also appears attracted to recent grassland burns (Jorgensen 2012, see High Counts, below). Peak counts in the east and west are on almost identical dates.

Summer: Traditionally, Brewer’s Blackbird bred mostly in Sioux Co, particularly on the grasslands in the Harrison area (Rosche 1982). A colony had been present about 10 miles east of Harrison for many years but had not been occupied for some 15 years until five pairs were present 11 May 2016; there were two nests with eggs 23 May (Wayne Mollhoff, personal communication). Mollhoff (2001, 2016) showed that breeding occurred throughout the Pine Ridge to Sheridan Co during both breeding bird atlas periods (1984-1989 and 2006-2011), but only in the second atlas period was breeding noted south of the North Platte River. There were breeding season reports 2006-2011 in Scotts Bluff, Banner, Kimball, and Morrill Cos; breeding was confirmed in Scotts Bluff and Morrill Cos. This expansion of range was not unexpected, as Brewer’s Blackbirds breed in northeast Colorado (CBAP 2016) and Wyoming (Faulkner 2010) just west of the Nebraska Panhandle and the southwest and tend to move breeding colonies periodically. Probably reflecting this range expansion in southwest Nebraska, BBS trend analysis show the species has increased 5.23% (95% C.I.; -2.34, 13.89) during 1966-2015 (Sauer et al 2017).

There are breeding season reports in Scotts Bluff Co 30 Jun 1965, 30 Jun 1982, and 23 Jul 1983, but breeding activity was not noted until 2007-2008, when at least one pair established in unusual habitat on the north side of Scotts Bluff NM. The first confirmed breeding for the county was 22 Jun 2010, when the first record on the Murray Lake BBS route was provided by birds at five stops, including two instances of adults carrying food. At about the same time, an adult was carrying food at Wildcat Hills NC, Scotts Bluff Co 19 Jun 2010. Reports apparently began in Morrill Co in 1987, when young were seen by Rosche (Ducey 1988); a female was feeding an immature on the Bighorn Escarpment south of Redington, Morrill Co 25 Jun 1995, and this location has hosted at least one breeding colony since. In 1998, 15+ pairs were present, and an active nest and three females carrying nest material were noted 15-16 May 1998 (Wayne Mollhoff, pers. comm.). Breeding was confirmed in Banner Co during 2006-2011 and there were breeding season reports there during the same period (Mollhoff 2016). Elsewhere in the southwest adjacent to the northeast Colorado plains breeding range are reports of six on a BBS route near Benkelman, Dundy Co 27 Jun 2007, near Bushnell, Kimball Co 6 Jul 1995 and 18 Jun 2011, up to 15 during 2-15 Jul 2018 in Cheyenne Co, and one in Red Willow Co 22 Jul 2008.

There are no documented records of breeding elsewhere in Nebraska since the 1930s (see Comments). Reported occurrences of nesting in Hall, Johnson, and Lancaster Cos (Bennett 1969, 1972, 1973, 1975) are almost certainly misidentifications of Common Grackle; the Johnson Co report was of nesting in a conifer in a suburban yard, typical of that species. The 1974 Hall Co report (Bennett 1975) was based on birds seen “carrying food”; Johnsgard (1979) suggested that this report may have been of a Rusty Blackbird, although there is no evidence to suggest any species other than Common Grackle.

There are about 65 undocumented Jun and Jul reports of Brewer’s Blackbird away from the Panhandle breeding range outlined above; most, including BBS data, are from the east and south and are highly questionable.

Early flocks were the 200 in Scotts Bluff Co 8 Jul 2012 and a mixed-age flock of 45 present for “a few days” near Fort Robinson, Dawes Co 23 Jul 2018. This species may have been affected by the very dry conditions in the west in 2012 when flocks were noted on early dates: “lots were under a pivot” in Morrill Co 30 Jun and 200 were in a mixed icterid flock in Scotts Bluff Co 8 Jul.

Migrants appear statewide in late Sep; peak movement probably occurs in early Oct, and most migrants leave the state by the end of Nov. Migrants are not uncommon in the east during Oct; 200 were in Sarpy Co 15 Oct 2009, and in the same year there were eight other reports 12-31 Oct of up to 15 birds.

Blake and Ducey (1991) stated that “a few overwinter some years” in southeast Holt Co.

Some undocumented winter reports are likely to have been misidentified Rusty Blackbirds.

Comments: The recent expansion of the breeding range in the southern Panhandle is not an unprecedented phenomenon; Brewer’s Blackbird expanded its range significantly eastward “from Minnesota” beginning around 1914 (Martin 2020), particularly in Minnesota and Wisconsin (Bent 1968), implying that breeding in Nebraska during that time was likely if birds had reached Minnesota by 1914. Indeed, Glandon and Glandon (1934) considered Brewer’s Blackbird a “very common summer resident” in Logan Co, and Trostler reported a nesting colony 2.5 miles east of Niobrara at a farmstead in Knox Co 19 Jul 1904 (undated handwritten note from Trostler to Bruner in NOU Archives, fide Wayne Mollhoff). Jorgensen (2012) considered the only acceptable breeding record for the eastern Rainwater Basin one from Tout (1902), who collected eggs 9 Jun 1896 near York that were identified as those of Brewer’s Blackbird. Mollhoff (2022) cites a record of a nest with eggs near Wahoo, Saunders Co 30 May 1894, now #217829 at the Western Foundation of Vertebrate Zoology, Camarillo, California. These reports suggest that Brewer’s Blackbird may have bred across much of Nebraska in the late 1800s and early 1900s. 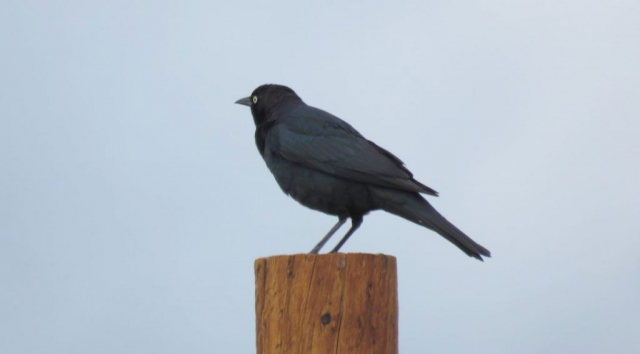 Photograph (top) of a Brewer’s Blackbird in Sowbelly Canyon, Sioux Co 16 May 2017 by Michael Willison.