Arrival is in early May. Migrants occur primarily in the western Panhandle and occasionally eastward to Sheridan (Rosche 1982), Lincoln, Keith, and Dundy Cos; they are uncommon migrants in Yuma and Phillips Cos in Colorado (which are adjacent to Dundy and Chase Cos), and one was near Haigler, Dundy Co 21 May 2009.

An older record of interest was described by Mollhoff (2022) in which 36 nests were discovered 1914-1916 by Gates and Swenk during a pollination study in hay fields at the University of Nebraska Experimental Station near Mitchell, Scotts Bluff Co.

In recent years there have been reports further east in the Panhandle and southwest. Singing males were present in a disjunct northward extension of sandy grassland about three miles south of Chappell, Deuel Co 12 Jun 1976 (Faanes et al 1979), and there is a summer report 11 Jul 1992 Cheyenne Co. An adult was carrying food in Dundy Co 21 Jul 2000. There is a breeding season report for Morrill Co 2006-2011 (Mollhoff 2016), and four were near Angora, Morrill Co 23 Jun 2021.  One at Scotts Bluff NM, Scotts Bluff Co 21 Jun 2021 was bit out of place.

Mollhoff (2016) reported a small increase, from six to 10, in the number of BBA blocks the species was reported in between the first (1984-1989) and the second BBA projects (2006-2011), but overall observer effort also increased markedly between the first and second BBA projects. BBS trend analysis shows the species has declined annually by -14.64% (95% C.I.; -21.44, -7.14) 1966-2015 (Sauer et al 2017); this analysis has limitations, however, because of the small number of BBS routes on which the species is reported. Additional BBS data (Sauer et al 2017) and the Second Colorado BBA (CBAP 2016) do, however, suggest the species is declining at the eastern edge of its range in the Great Plains.

Departure is mostly in mid-Sep. Migrants are probably more common in fall than in spring, since their habitat tends to be lightly birded, and occur east to Sheridan, Keith, Lincoln, and Dundy Cos.

Reports in late Jul where breeding is not expected are of early migrants. Small flocks form as early as early to mid-July, perhaps late June, and disperse into sagebrush habitats (Steven Mlodinow, pers. comm.) and sometimes nearby non-sagebrush areas. Such reports are 20 Jul 2022 along Hiway 71 just north of Kimball, Kimball Co, 21 Jul 2012 Sowbelly Canyon, Sioux Co, one at Montz Point WMA, Scotts Bluff Co 30 Jul 2022, several at Wind Springs Ranch, southern Sioux Co 30 Jul 2001, and another there 9 Aug 2012 that may have been displaced by extreme drought conditions that year.

Comments: Wayne Mollhoff provided information from notes made by L. M. Gates of a visit to Scotts Bluff Co in 1913 with Swenk in which five nests of Brewer’s Sparrows (originally thought to be Clay-colored Sparrows) were observed at the University Experiment Station Farm. There are no recent breeding records from Scotts Bluff Co. 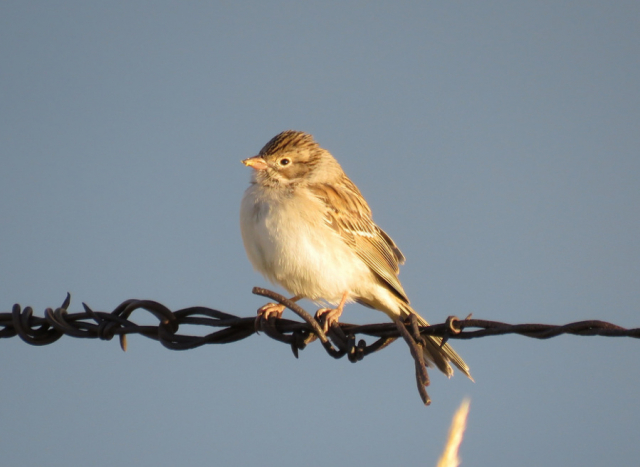