Comments: A male hummingbird present 6 May-late Aug 2014 at the Juanita Whittecar yard a few miles southeast of Chadron in Dawes Co was photographed 8 May by a motion-triggered camera; the photographs were examined by Sheri Williamson, Southeast Arizona Bird Observatory, and identified as a hybrid between Broad-tailed X Ruby-throated Hummingbirds (https://ebird.org/checklist/S18291220 (ebird.org)). Additional photographs were taken 18 Jun (https://ebird.org/checklist/S71923206 (ebird.org)).

This is one of very few documented records of inter-generic hybrids involving North American hummingbirds. The first known inter-generic hybrid between Archilochus and Selasphorus hummingbirds was described by Banks and Johnson (1961) in a paper that exhaustively describes a hybrid between Broad-tailed Hummingbird and Black-chinned Hummingbird, as well as several other hummingbird hybrids. A second example of this hybrid combination was of a bird at a feeder in Flagstaff, Arizona 26 Aug through at least 1 Sep 2015; this bird was photographed by Jason Wilder (https://www.flickr.com/gp/37893733@N06/y8nD9Q). A hybrid between Black-chinned and Rufous (Selasphorus rufus) Hummingbirds was photographed in Spokane County, Washington 14 Jul 2013 by Michael Woodruff, and verified by Sheri Williamson (http://ebird.org/ebird/view/checklist/S23358116). Oddly, the same observer hosted a hybrid between Black-chinned and Calliope (Selasphorus calliope) hummingbirds later that same month 31 Jul-2 Aug; excellent photographs and measurements were taken 2 Aug (http://ebird.org/ebird/view/checklist/S23358088); this bird was verified as this hybrid combination by Sheri Williamson.

An adult male photographed in southern British Columbia in June 2014 was identified as a probable hybrid between Ruby-throated and Calliope (Selasphorus calliope). 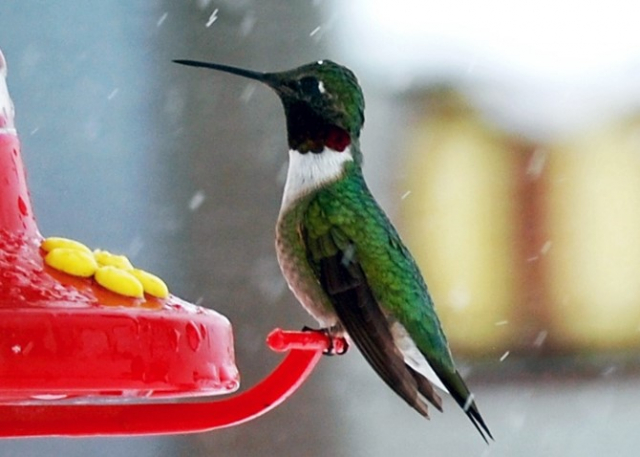