Taxonomy: There are 12-15 subspecies recognized, all but three occurring north of Mexico (Poulin et al 2020, Pyle 1997, Gill and Donsker 2017). Of the northern subspecies, most have restricted ranges west of the Rocky Mountains, but these three may occur in Nebraska: alascensis, breeding in south-central Alaska and wintering from Arizona to northwest Arkansas, montana, breeding from west-central British Columbia east to Alberta and south to southern Arizona and west Texas and wintering from California to Louisiana, and americana, breeding from northern Saskatchewan east to Newfoundland and south to Minnesota and West Virginia and wintering from California to Florida.

There is no evidence that alascensis has occurred in Nebraska. Subspecies montana breeds in the Black Hills of South Dakota, and presumably is the subspecies breeding on the Nebraska Pine Ridge. A specimen collected in Sioux County 12 Feb 1896 was assigned to montana (Bruner et al 1904); it was likely resident (see Winter). Creepers breeding elsewhere in Nebraska, notably the eastern Niobrara River Valley and the Missouri River Valley, may be americana (Bruner et al 1904, AOU 1957).

Departure of wintering birds and migrants takes place by the end of Apr. There are several records mid-May through early Jul away from known breeding locations that are puzzling; although they might suggest local breeding attempts it seems more likely they are dispersing non-breeders (see Fall).

Resident: This species is generally resident wherever it breeds except for birds at the northern edge of the breeding range in Canada, which move south in winter (Poulin et al 2020).

Brown Creeper breeds in disjunct locations in Nebraska; based on the low frequency of sightings, breeding numbers must be minimal. Breeding has been confirmed in only four areas, Dawes Co on the Pine Ridge, Brown Co and Smith Falls SP, Cherry Co in the Niobrara River Valley, and Sarpy and Washington Cos near the Missouri River; most records are from Sarpy Co, where there have also been several additional summer reports without evidence of breeding.

In the Niobrara River Valley, there are two breeding records. An adult carrying food to a nest in a rotten ponderosa pine, with a male singing nearby (Brogie and Mossman 1983, Mossman and Brogie 1983). The location was on the Niobrara River floodplain in Brown Co in mixed woodland; two nestlings were present 9 Jul 1983 (Mossman and Brogie 1983). A nest at Smith Falls SP, Cherry Co was found 25 May 2022, and monitored through fledging, which occurred on or about 20 Jun (Gordon Warrick, pers. comm.; photo).

The history of breeding in Sarpy Co is recent, beginning in 1974; the maximum number of nesting pairs reported since then is two. All Sarpy Co records are from Fontenelle Forest; Cortelyou (1975) stated that a female with a brood patch had been banded 16 Jul 1974, and that birds had been seen carrying food in 1974 and 1975. In 1975 birds were seen carrying sticks to a nest site, and on 26 May two birds were flushed from under loose bark on a dead tree, presumed to be an elm (Cortelyou 1975). The nest was about six feet from the ground and contained two nestlings. The few documented reports of nesting are as follows. A pair was carrying food at Fontenelle Forest 20 May 2010 and one was singing there 23 May. A family group was seen 28 May 2005. Two nests were found on the north floodplain 7 Apr 2016; nest building was under way there 12 Apr and singles were present 3 May, 14 May, and 18 Jun. A single bird was seen at Fontenelle Forest 15 Jun 2020.

In southeast Washington Co, one was singing at the Krimlofski Tract, Neale Woods, 24 May 1998, nest-building was observed there 20 May 2003, adults were carrying food to a nest site there 28-29 May 2006 (Mollhoff 2006), and two sightings there 23 May and early Jun 2004 separated by about a quarter mile might have indicated the presence of at least two pairs.

Early dates are away from known breeding areas, although sightings in late Jul and Aug may be of dispersing young birds; family groups disband as early as mid-Jul, before arrival in wintering areas by Oct, when only single or paired birds occur (Poulin et al 2013). One seen 13 Aug and 26 Aug 2005 at Alma, Harlan Co was almost certainly an early migrant. In general, migrants and wintering birds arrive in late Sep, with peak movement probably in Oct and early Nov.

In recent years, this species has been reported more often in fall and winter than formerly.

Winter: Brown Creepers generally winter within their breeding range, except for northern or high-altitude breeding birds, although the “center of gravity of the population shifts southward in winter” (Harrap and Quinn 1995). This shift causes an influx into Nebraska, when numbers are much higher than in summer. Winter reports are concentrated in the east, and to a lesser extent westward in the Platte River Valley to Lincoln Co. The high CBC count is 43 at Lincoln, Lancaster Co 18 Dec 2010, but CBC reports are few and scattered elsewhere.

At least one example of social roosting in winter has been observed, that of about a dozen individuals clumped beneath an eave in “mid-winter” during the 1960s near Wisner, Cuming Co (Roger Sharpe, personal communication). 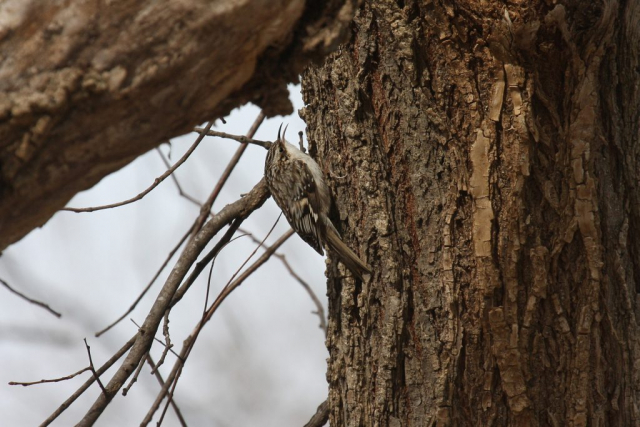 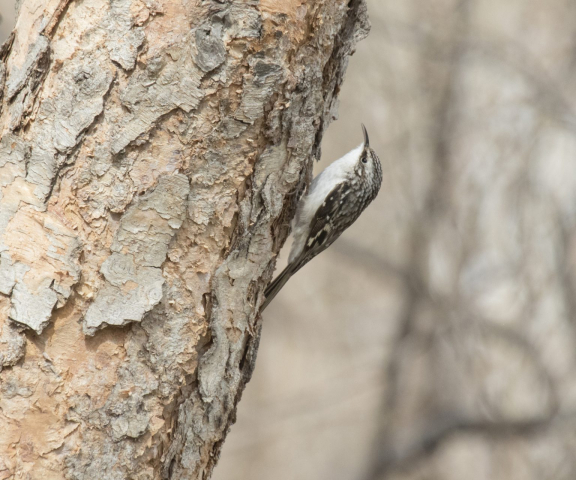