Taxonomy: Pyle (1997) recognized two subspecies, longicauda and rufum. According to AOU (1957), eastern rufum breeds west to western Minnesota, western Iowa, and western Missouri, while western longicauda breeds east to eastern Wyoming, southwestern Nebraska, and eastern Colorado. Thus the Brown Thrashers which breed throughout most of Nebraska are probably intergrades of the two subspecies.

Migrants in the south and east arrive at the end of Mar and spread west over the rest of the state in Apr, with numerous reports in Apr in the Platte River Valley. Arrival is about a month later in the north and west.

The range expanded into grasslands of the Great Plains during the late 1800s as European settlers arrived; fire suppression, woody plantings, and the breakup of prairies into fields bordered by fencerows and shelterbelts created optimal habitat for the species (Cavitt and Haas 2020). As agricultural land use has continued to intensify, habitat for this species may be decreasing. BBS trend analysis shows an annual decline of -1.28 (95% C.I.; -1.88, -0.67). Densities are currently highest for the USA in the central Great Plains, including eastern Nebraska (Cavitt and Haas 2020).

Departure is gradual, with most birds leaving by late Sep in the Panhandle. Elsewhere, Dec reports are numerous; most reports are from CBCs. Jan and later reports are far fewer and are discussed below under Winter.

Banding data indicate that Brown Thrashers which summer in Nebraska commonly winter in Texas, and also that in fall some individuals wander northward, at least to South Dakota. 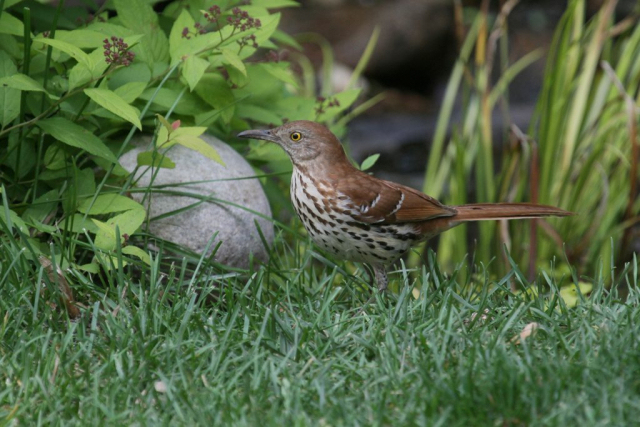