The last dates above are about a month prior to departure of Bullocks’ (11-12 Sep) and Baltimore Orioles (4-6 Sep in the west); perhaps hybrids are at a disadvantage finding mates and tend to leave early.

Comments: Hybridization occurs between this species and Baltimore Oriole (Rising 1970, 1996; Carling et al 2011; Walsh et al 2020), causing at one time their taxonomic status to be controversial. AOU (1983) lumped them as a single species, Northern Oriole, but returned both to full species status (AOU 1998) based on absence of free interbreeding at some locations resulting in a stable hybrid zone (Rising 1996, Carling et al 2011, Walsh et al 2020). Furthermore, “the two species differ in plumage, vocalizations, physiologic traits, molt, nesting ecology, and allozyme frequency to a degree greater than in any other birds generally treated as single species” (DeBenedictis 1996). Recent genetic studies suggest that the closest relative of Baltimore Oriole is actually Black-backed (Abeille’s) Oriole (Icterus abeillei) and that Bullock’s Oriole is a member of the Streak-backed Oriole complex (Flood et al 2020). One factor limiting expansion of the hybrid zone is lowered fitness of hybrids; one cause of this is that Baltimore Oriole molts in summer and Bullock’s in fall, but hybrids molt twice, a significant energy drain (Rohwer and Johnson 1992, Flood et al 2020), and another is the putative difference between the two species in ability to thermo-regulate (Carling et al 2011, Rising 1996).

Walsh et al (2020) found that the center of the hybrid zone has moved westward since the 1950s and narrowed to less than 100 miles, its center located around Crook, Colorado, south of Cheyenne Co, Nebraska. Carling et al (2011) estimated hybrid zone width nearer to 200 miles. The presence of phenotypically pure adults of both Bullock’s and Baltimore Oriole in the hybrid zone suggests assortative mating is occurring (Carling et al 2011, Flood et al 2020), although perhaps not at a high level, since Walsh et al (2020) found that “nearly all orioles within the hybrid zone” exhibited some degree of genomic mixing, and “41% [were] assigned as recent-generation (F1/F2) hybrids”.

Environmental factors are known to affect the locations of the Great Plains avian hybrid zones (Swenson 2006), and intriguingly, similar westward movements to those documented in the orioles (Corbin and Sibley 1977, Walsh et al. 2020) have previously been documented in flickers (Aguillon and Rohwer 2021) and the hybrid zone between the Lazuli (Passerina amoena) and Indigo (P. cyanea) buntings (Carling and Zuckerberg 2011).

Short (1961) considered the hybrid zone rather wide in Nebraska, with its center a line from Big Springs, Deuel Co to just west of Valentine, Cherry Co (see map above). Short found pure Baltimore Orioles west to Hastings, Adams Co, St. Paul, Howard Co, and Spencer, Boyd Co, and pure Bullock’s Orioles east only to Chadron, Dawes Co, and Big Springs. However, hybrids outnumbered pure Baltimore Orioles east as far as Blair, Washington Co, and “obvious hybrids” occur in the northwest in summer (Rosche 1982). Youngworth (1955) and Mossman and Brogie (1983) found Baltimore Orioles predominant in the Niobrara Valley Preserve, although hybrids were seen during breeding season. Intriguingly, there is a nest record for Bullock’s Oriole for Brown Co in 1898, but details of identification of the parents are not available (Mollhoff, pers. comm.; Mollhoff 2022); it seems quite likely this nesting was by hybrids or a mixed Baltimore x hybrid pair. Both Baltimore and Bullock’s Orioles have been reported at NNF Bessey, Thomas Co (Bray 1994); a hybrid was there 11 Jun 1986. Jaramillo and Burke (1999) stated “If anything, there is evidence for an eastward invasion of Bullock’s genes, but not the opposite”. In Keith Co, Brown et al (1996) found that 116 of 176 birds examined (not all were nesting birds) were phenotypic Baltimore Orioles, and 41 showed evidence of hybridization, the remainder apparent Bullock’s Orioles. Of six orioles seen on the Dalton BBS route 18 Jun 2006, five were hybrids, the other a female Bullock’s Oriole. It is possible that the incidence of Bullock’s Oriole and introgressants east of the Panhandle has been reduced since the westward spread of Baltimore Oriole (Corbin and Sibley 1977).

Observations in Scotts Bluff Co suggest that as Baltimore Orioles moved west in the 1980s and came in contact with Bullock’s, hybrids were common, possibly since the the first birds westward may have been mostly males (as was the case with Blue Jays after they entered northeastern Colorado, Bill Kaempfer, pers. comm.) but as numbers of Baltimore Orioles increased in western Nebraska and assortative mating became an option, hybrids became less common. This sequence was observed in a Mitchell, Scotts Bluff Co yard by Kathy DeLara (pers. comm.); there was a Bullock’s paired with a Baltimore in 2007 and numerous hybrids for several years, but only one hybrid in 2017 and none in 2018 and no phenotypic Baltimores during those two years. 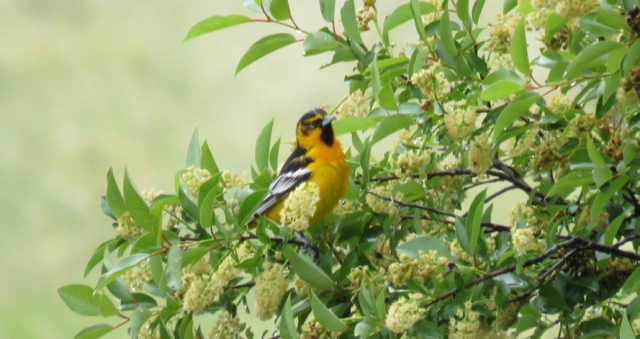 Bray, T.E. 1994. Habitat utilization by birds in a man-made forest in the Nebraska Sandhills. M.S. thesis, University of Nebraska-Omaha.

Rohwer, S., and M.S. Johnson. 1992. Scheduling differences of molt and migration for Baltimore and Bullock’s orioles persist in a common environment. Condor 94: 992-994.