Taxonomy: There are two subspecies of California Gull (Jehl 1987, Gill and Donsker 2017), californicus, breeding locally from British Columbia south to California and central Colorado, and albertaensis, breeding in central Canada and the north-central and northwestern United States. There is a zone of overlap in Montana (Winkler 2020, Howell and Dunn 2007). Field identification of the subspecies is difficult (see Comments).

Both subspecies occur in Nebraska. Increased late summer and early fall numbers at Lake McConaughy are most likely immature non-breeders or possibly failed breeders of californicus from Colorado; californicus is undocumented elsewhere in Nebraska. Leukering (post to COBIRDS 3 Dec 2010) stated that at least 80% of California Gulls in Colorado are californicus. We consider albertaensis to comprise most if not all spring and fall migrants through Nebraska east of Lake McConaughy; both subspecies would be expected at Lake McConaughy during albertaensis migration periods. There are three band recoveries involving albertaensis; one banded in Montana 8 Jul 1940 and two banded in North Dakota 9 Aug 1964 were recovered at Valentine NWR, Cherry Co 4 Oct 1940, in Hooker Co 14 Sep 1964, and in Deuel Co 26 Sep 1964 respectively. Banding results support the occurrence of the species (presumably albertaensis) in the Interior (Houston 1977, Gaston et al 2008), although Gaston et al (2008) pointed out that chicks of Ring-billed Gull and California Gull are essentially indistinguishable at time of banding and the two species often breed in the same colonies, thus casting some doubt as to whether banded adults assumed to be California Gulls (for example recoveries in Louisiana) are indeed the latter species.

There may be some southward movement of californicus in winter to the southern Great Plains (Gaston et al 2008); Robbins (2020), while noting that information on subspecies in Missouri is minimal, stated: “Most are likely of the nominate subspecies, however, two … observations, 18 Jan 1999 (Stockton Lake) and 13 Feb 2019 (Longview Lake), may be attributable to the more northern albertaensis“. Both subspecies have been collected in Louisiana (Mark Robbins, personal communication). Supporting the possibility of eastward vagrancy by californicus was a well-documented record of an adult in Cleveland, Ohio 21 Dec 2020 (eBird.org).

A well-described and -photographed bird at Branched Oak Lake 5 Apr 2019 was noted to have a darker bill than same-age birds in California, raising the possibility that interior California Gulls (albertaensis) may differ in this respect.

Early and late dates cited above are from locations away from Lake McConaughy; wintering and summering there of small numbers is annual.

Later dates are cited in Summer, below.

In 2014 reports were indicative of a surprising influx in eastern Nebraska of birds of all age groups, although many of the reports, unfortunately, were not supported by unequivocal photographs, particularly of birds in flight; there were at least five birds at four locations 13 Mar- 5 May (Silcock 2014).

Summer: Breeding occurs close to Nebraska at several sites in northeastern Colorado; no estimate of breeding pairs was given by Wickersham (2016), but up to 1500 pairs of the nominate race californicus were nesting at Riverside Reservoir in Weld Co around 2000 (Mark Robbins, pers. comm.). Breeding also occurs in northern South Dakota (Tallman et al 2002). In Colorado, islands are used for nesting (Andrews and Righter 1992); the lack of islands at Lake McConaughy may obviate breeding there. Because of the proximity of these breeding colonies to Nebraska, we presume that most summer records at Lake McConaughy are of californicus.

Age classes are of interest, and suggest presence of failed breeders and non-breeding immatures. The 21 counted there 20 Jun 2004 consisted of eight adults, 11 second alternate, and one first alternate-plumaged birds, and the 30 on 21 Jun 2005 included 19 adults, six second-alternate, and five first-alternate birds (Stephen J. Dinsmore, pers. comm.).

The single eastern record cited is probably an immature non-breeding albertaensis, but the remainder are likely wanderers from Colorado, as suggested above for summering birds at Lake McConaughy.

Numbers of California Gulls increase at Lake McConaughy during late summer, with the first arrivals noted in Jul. A good early count was a flock of 84 there 19 Jul 2003, consisting of 17 adults and the rest molting near-adults (Silcock 2003). Another good count of perhaps similar provenance was the 80 there on 30 Jul 2006, including 70 adults, eight juveniles, and single first- and second-alternate birds (Stephen J. Dinsmore, pers. comm.). Numbers continue to build into fall, presumably as summering birds are joined by northern prairie breeders and then decrease in early to mid-winter, with sizeable numbers still present into late Dec. Of an approximate total of 474 birds reported to eBird.org in all years through spring 2022 at Lake McConaughy, 81% were present Aug-Dec.

In recent years a few have lingered through winter (see Winter).

The only mid-winter record elsewhere is of an adult at Twin Lakes WMA, Seward Co 27 Jan 2015.

Comments: Identification in the field of the two subspecies is difficult. According to Tony Leukering (post to COBIRDS), “the only character that allows fairly certain differentiation of subspecies, and this ONLY on full adults, is the precise wing tip pattern (Pyle 2008): californicus has black on outer primaries extensive, that on outer web of p7 occasionally (~13% of individuals) and p8 often (~56%) reaching primary coverts, and albertaensis has black on outer primaries reduced, that on outer web of p7 not reaching primary coverts and on p8 only occasionally (~15%) reaching primary coverts. Complicating matters is reported hybridization with Herring Gull in Colorado (Andrews and Righter 1992) and possible intergradation between the two subspecies in Montana (Howell and Dunn 2007).

A specimen collected by Hudson in Lancaster Co 19 Mar 1933 (Hudson 1933) is now an axial skeleton, UNSM ZM11152, but Hudson (1956) later retracted the report, concluding that the measurements did not eliminate the possibility of the specimen being a small Herring Gull. 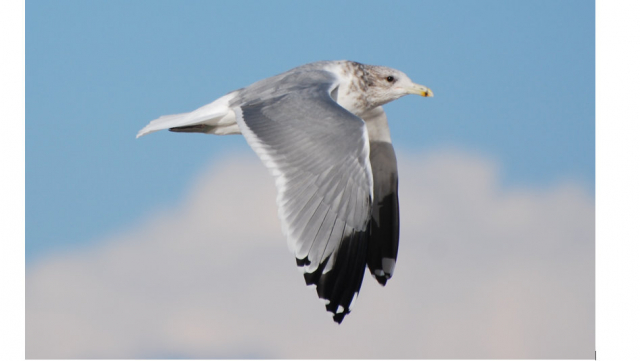