Taxonomy: Ten or eleven subspecies are generally recognized (Pyle 1997, Gill and Donsker 2017, Clements et al 2016); of six that occur entirely north of Mexico, ludovicianus is found over most of the eastern US range.

Resident: Carolina Wren is at the northwest edge of its breeding range in southeast Nebraska, and because of its sensitivity to cold weather, the extent of its year-round distribution in the state has varied considerably over the years. Around 1900, Carolina Wren was rare in Nebraska; Bruner et al (1904) cited only three records, two older reports in Richardson Co and one in Lancaster Co, the latter a specimen collected 20 Feb 1902 by Wolcott (1902), who suggested it was “probably a rare resident in the extreme southeastern part of the state”. By the 1950s, however, the species was occupying a summer range not unlike the current (2017) range in the southeast (Rapp et al 1958), but with only these reports of nesting since Bruner et al (1904) and prior to winter 1976-1977: a nest with a nestling was at Superior, Nuckolls Co 10 Jun 1928 (Johnston 1928), another nest there with adults feeding young was found 4 May 1934 and a second clutch was laid by 7 Jun (Johnston 1934), and young were seen 13 Jul 1965 in Adams Co (Bennett 1967).

Data from states at the range periphery indicate that summer and fall dispersal, coupled with ability to survive the subsequent winter, is the probable method by which the species expands its range (for example, Thompson et al 2011). Several additional summer reports in the south, westward to Lincoln and Perkins Cos, prior to winter 1976-1977, were probably of summer-fall dispersers, including a specimen, HMM 2894, collected at Inland, Clay Co 6 May 1923.

The best known major weather event affecting Nebraska Carolina Wrens was the severe winter of 1976-1977. During the five subsequent years, reports were few and restricted mostly to summer months; none were reported on CBCs for five years. There followed a gradual recovery; the breeding range extended north to Dakota, Dixon, and Knox (Grzybowski 1992) Cos, and west to Lancaster (Williams 1976), Clay (Silcock 1995), and Harlan Cos. There was also an undocumented breeding record for Cherry Co in the period 1984-89 (Mollhoff 2001). In the south, a small number became established at Harlan Co Reservoir in 1998, and one was singing at McCook, Red Willow Co 21 Jul 2005. At the McCook location, breeding was confirmed with one of two pairs at McCook carrying nest material 1 May 2006. Reports at McCook persisted through at least 2009. It was established at Wilderness Park, Lincoln, in the late 1990s and is still extant there, although the severe winter of 2000-2001 apparently impacted both this and the Harlan Co populations; none were noted at either location in 2001 until Aug, when birds re-appeared at both locations; it is possible these populations departed and returned after the winter rather than simply perishing. Two wintered in Hastings, Adams Co 2015-2016 but left on 2 May when House Wrens arrived.

The winter of 2009-2010 was colder than average, and early winter storms generated deep snow cover that was present during the entire season over much of the state. This likely caused high Carolina Wren mortality; many observers noted that individuals in their yards survived into Jan or Feb but then disappeared; a rough estimate from observer comments suggests that at least 50% of the resident birds did not survive the winter, either dying or withdrawing southward. Small numbers present at isolated locations were wiped out; this included cities such as McCook, where the species has not been observed since 2009. Feeders likely increased survival in localized areas. Following the winter, Carolina Wren began to slowly reoccupy formerly inhabited sites. First reports from prior haunts in spring 2010 were 3 Apr-21 May at Fontenelle Forest, Sarpy Co and 21 Apr at Platte River SP, Cass Co. Later in the summer and fall of 2010 reports continued to increase.

From 2010 to the present the summer range has slowly expanded to the north and west, as mapped. A pair nested at Gothenburg, Dawson Co 6 Jun 2014. However another severe winter 2018-2019 reduced numbers significantly in the Douglas Co area, although birds lucky enough to find feeders in the city were able to survive (Rick Schmid and Jerry Toll, pers. comm.).

There was an amazing number of extralimital reports by multiple observers in fall 2019, generally separated into three areas of the state: the southwest, with nine reports involving at least three birds were from three locations in Red Willow and Chase Cos 12-14 Sep, the central Platte River Valley, four reports involving five birds in Hall Co 8 Aug-19 Oct, and in the northeast, eight reports involving six birds from six locations in Knox, Dixon, Wayne, and Burt Cos. The following spring reflected some of these dispersals; there were six reports involving six birds in the Platte River Valley from Platte Co to Buffalo Co 3-31 May, and in the northeast there were reports 3-27 May from Cedar, Cuming, and Madison Cos.

Again in fall 2020 a similar dispersal occurred; westerly, 1-2 were reported in Keith, Lincoln, Hitchcock, and Dawson Cos 9 Aug-25 Nov, and northerly, 1-2 were at seven sites in Knox and Cedar Cos 8 Aug-28 Oct and singles were in northern Dixon Co 8 Aug and in southwestern Dixon Co 24 Sep, the observer’s “2nd ever” there, Madison Co 24 Sep, and Wayne Co 14 Oct. The following summer of 2021, outliers were singles at South Shore, Knox Co 20 Jun, Minden, Kearney Co 18 Jul, and in Adams Co 19 Jul.

Summer: Most reports in spring, summer, and fall north and west of the resident breeding range are of dispersing birds, an important component of this species’ range expansion behavior. Recent reports for spring are in the area bounded by Dixon, Platte, Hall, Buffalo, and Franklin Cos, but during the period 2009-2014, probable and confirmed breeding occurred north and west only to Douglas, Lancaster, and Thayer Cos (Mollhoff 2016).

Winter: This species is sedentary within its breeding range. Winter temperatures are a primary determinant of the northern edge of the range of this species (Mehlman 1997, Haggerty and Morton 2020), probably because cold temperatures reduce ground-based prey, and so the winter range limits may thus be directly associated with food supply and indirectly with temperature (Job and Bednekoff 2011, Haggerty and Morton 2020). Data from states at the range periphery indicate that spring dispersal, coupled with ability to survive the subsequent winter, is the probable method by which the species expands its range. 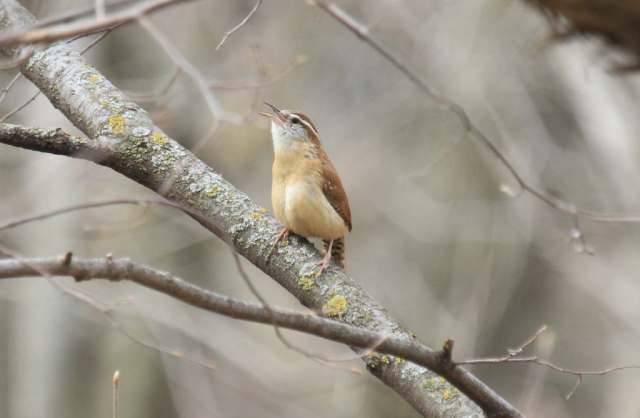