This specimen and UNSM ZM10487 are labelled Purple Finch, possibly inadvertently by the collector.

Summer: Although Cassin’s Finch breeds regularly in the Black Hills of South Dakota, with dates Jun-Jul (Tallman et al 2002), as well as in the Laramie Mountains of eastern Wyoming (Faulkner 2010), there is only one confirmed breeding record for Nebraska, perhaps because of a lack of its preferred breeding habitat of high elevation coniferous forests (Andrews and Righter 1992). Rosche (1982) found a female feeding two juveniles in Chadron SP 25 Jul 1980; breeding probably occurred in Nebraska, as movement away from breeding areas in Wyoming and South Dakota is rare (see Fall). Mollhoff (2016) showed two reports from the first breeding bird atlas period 1989-1994, one of these classified as “Probable”, on the Pine Ridge of Sioux Co, apparently in the Soldier Creek and Wood Reserve areas (Wayne Mollhoff, personal communication). In the 2006-2011 atlas (Mollhoff 2016), it was stated “the species was found [in a single block] in three separate years, and “despite repeated searching, no nest was found”. This block is near Exit 1 on Interstate 80 in Kimball Co; observations included the following: a female carrying an object 28 Jun 2007, and five birds, including at least one pair, engaged in courtship activities 15 May 2008 (Wayne Mollhoff, personal communication; Mollhoff 2022).

This species is generally resident in its South Dakota and Wyoming breeding areas, but at least some birds leave the breeding range in late summer and early fall, if only as altitudinal migrants (Faulkner 2010); adult males and all females consistently disappear from breeding areas in northern Utah in mid-Sep (Hahn 2020). Nebraska reports in late summer fit this pattern.

Winter: Wintering birds in Nebraska are most often reported in Scotts Bluff Co, suggesting arrival via the North Platte River Valley from the Laramie Mountains in eastern Wyoming. Tallman et al (2002) consider Cassin’s Finch to be “accidental” away from the Black Hills in South Dakota with only two records.

In years when they occur, Cassin’s Finches typically arrive in small numbers, increasing to as many as the 52 seen 10 May 1979 at Crawford and then disappearing in May (Rosche 1982). In 2015 good numbers were in Scotts Bluff Co, with first report 10 Jan and highest numbers 28 Feb. An influx occurred in 1996-97, when several appeared in early Oct and wintered in Scotts Bluff Co. Good numbers appeared in the western Panhandle in fall 2020; best counts were 26 at Exit 1 on I-80, Kimball Co 18 Oct and 16 at Wildcat Hills NC 26 Oct, where reports were 10 Oct-27 Nov. Elsewhere in 2020, a pair was at the Clark feeders in Lincoln Co 14 Nov, in Scotts Bluff Co, two were along Old Stage Road 20 Nov and one in Carter Canyon the same day, and three were at Bushnell, Kimball Co 22 Nov. 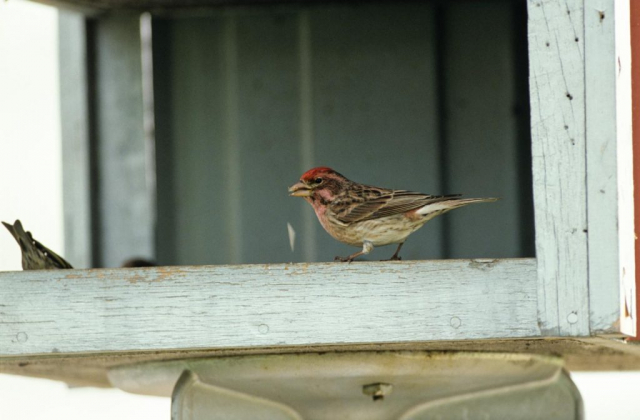