Cassin’s Kingbird is most common in the southern Panhandle, especially the Bighorn and Pine Bluffs Escarpments and the Wildcat Hills (Rosche 1982, 1994). It is less common and more localized, but apparently slowly increasing on the Pine Ridge. Generally, it breeds above 3500 feet in elevation; a few high elevation grassland records associated with scattered rocky outcrops (3800-4500 ft) include up to five 1-5 Jun 2016 Agate Fossil Beds, Sioux Co, 21 Jul 2010 near Agate Fossil Beds and two there 23 May 2016, and 12 Jun 2008 Oglala National Grasslands, Sioux Co. At lower elevations, there is some overlap with Western Kingbird, especially where pines and riparian woodland meet.

On the Pine Ridge, breeding season records are surprisingly few, most in the area of Sioux and Dawes Cos between Sowbelly Canyon and West Ash Creek. There is a cluster of records in the area of Metcalf WMA, Sheridan Co that are probably related to the small population in neighboring Bennett, Shannon, and Jackson Cos, South Dakota (Tallman et al 2011). The easternmost Nebraska nesting record is from near Metcalf WMA 4-15 Jun 1986, when a pair was carrying nesting material (Huser 1986). Two were in the same area 12 Jun 1992, one was just north of Metcalf WMA 17 May 2011, and a pair was a few miles further south May 1986. The only record of breeding between West Ash Creek and Metcalf WMA is of two seen 27 Jul 2013 and eight, including a recently fledged juvenile with undeveloped remiges and rectrices, in Deadhorse Canyon, Dawes Co 23 Aug 2014.

The earliest Nebraska fledgling dates are in mid-Jul (see Breeding Phenology), suggesting that sightings in the last part of Jul are of wandering family groups. Two birds at Wind Springs Ranch, Sioux Co 21 Jul 2001, far from ponderosa pines, and singles in Dundy Co 18 Jul 2020 and at Lake Ogallala, Keith Co 19 Jul 2014 may have been post-breeding wanderers.

Rosche (1982) noted that the Cassin’s Kingbird migration peak in fall is rather later than that of Eastern and Western Kingbirds; most “yellow-breasted kingbirds seen after about 10 Sep tend to be Cassin’s” (Rosche 1994). Fitting this pattern are easterly records from Clear Creek WMA, Garden Co 20 Sep 2013, and near Lake McConaughy, Keith Co 25 Sep 2013. Additional reports east of the Panhandle are 16 Aug 2008 western Cherry Co, 28 Aug 2016 Perkins Co, 11 Sep 1963 Lincoln Co, and 17 Sep 2021 Lake Ogallala, Keith Co.

An extraordinary but suggestive report was of one calling and seen well at Valentine, Cherry Co 16 Sep 2021, after Western Kingbirds had departed; unfortunately, the bird was not photographed. 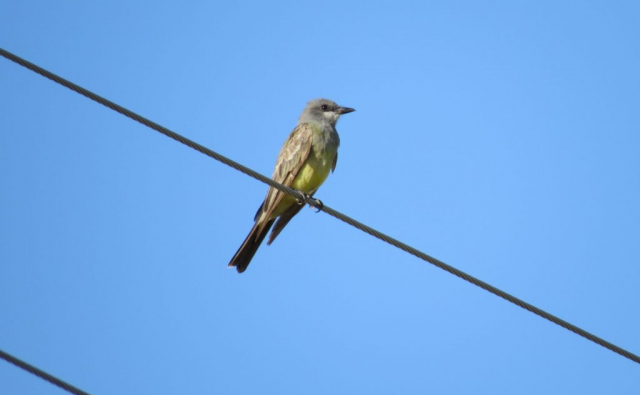