Arrival is in late May. Migrants pass through Oklahoma in early Apr and the earliest spring date in Kansas is 29 Apr (Dunning et al 2020).

Summer: This species is primarily associated with sand sage (Artemisia filifolia) grasslands in Nebraska, mostly in the southwest and southern Panhandle (Rosche 1994). In the southern Panhandle, however, sand sage occurs in only a few localized areas in the Wildcat Hills and on the Bighorn Escarpment. Cassin’s Sparrow avoids areas that are intensively grazed (Brown and Brown 2001). Summering locales are isolated and erratically occupied (Mollhoff 2016), except for core areas of extensive sand sage prairie in Kimball, Dundy, Chase, and Perkins Cos, where it is likely to be found every year, but even here abundance is variable from year to year. This species has been considered nomadic, even during a given breeding season or to areas outside their normal range, in response to rainfall variations (Dunning et al 2020). Years with increased abundance in Nebraska, such as 1974 and 2011, occurred during and may be associated with periods of drought in the species’ core breeding range in the southern Great Plains and southwestern United States (U.S Drought Monitor 2018, National Weather Service data). Breeding bird surveys conducted by Bird Conservancy of the Rockies (2018) of sand sage prairie areas in Dundy, Chase and Perkins counties produced density estimates of 2.4 and 2.8 birds per square km in in 2016 and 2017, respectively. Density estimates, when multiplied by the size of the study area, generated estimates of overall numbers of 6946 birds in 2016 and 7949 birds in 2017 (Bird Conservancy of the Rockies 2018).

North of the North Platte River Valley reports are sporadic, but are from Sioux, Box Butte, Grant, and Arthur Cos. In 2011 there was a major influx, mostly reflected in increased numbers rather than expansion beyond areas where the species has occurred in recent years. This influx, like the 1974 one, was likely associated with drought in the southwestern United States.

In addition, there are two recent reports from Cherry Co in 2014, furthest northeastward to date: a singing bird was recorded at Valentine NWR 5 Jun and another was seen just south of NNF McKelvie 15 Jun.

Departure is in Aug, with few dates available; identification problems of birds away from breeding habitat may contribute to the lack of fall reports, and it is possible that individuals are present somewhat later but are undetected (Dunning et al 2020). Dorn and Dorn (1990) observed breeding Cassin’s Sparrows in eastern Wyoming until 28 Aug, after which none were seen. 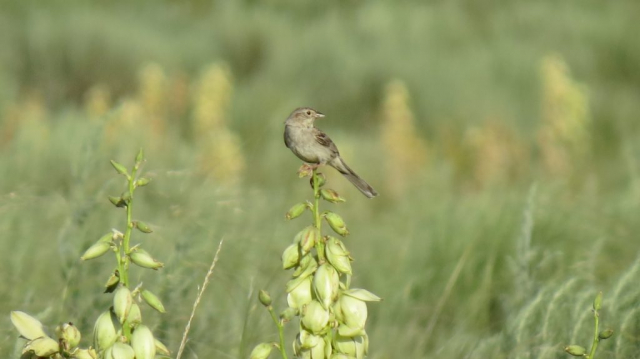