Taxonomy: Six subspecies are often recognized (Gill and Donsker 2017, Clements et al 2017), although Strickler and West (2020) merged cavicola with fulva, which is followed here. Three subspecies occur in the Caribbean and Mexico, the remaining two in North America: pallida from southern USA to north-central Mexico, and fulva of the southeast USA, Hispaniola, and Cuba.

The Nebraska record cited above was identified from the included photograph as subspecies pelodoma (=pallida, Phillips 1986), the subspecies breeding in New Mexico and Texas. Some authors merge the genera Petrochelidon and Hirundo, in which case pelodoma would replace pallida, as the latter is pre-occupied in Hirundo.

Summer: There are six accepted records, all from Keith Co and extreme southeast Garden Co, including four juveniles and two adults:

The juvenile netted 31 May 1991 at a concrete culvert about 4 miles south of highway 92 on highway 26 in extreme southeast Garden Co (cited above) was photographed and released later that day (Brown and Brown 1992) at Keystone Lake, Keith Co (Rosche 1994). The authors suggested that this bird was hatched in central Texas in early spring 1991 (nesting begins in Texas in Mar) and moved north with migrating Cliff Swallows. Another juvenile was captured 26 Jun 1995 east of Lake Ogallala (Brogie 1998); Brown et al (1996) stated that this bird was captured 6.5 miles east of Cedar Point Biological Station along the Sutherland Canal. A third juvenile was netted at Keystone, Keith Co 1 Jul 1998; Brown hypothesized that it also was hatched in Texas and came north with Cliff Swallows (Brown and Brown 2001). A fourth juvenile was netted just north of Lake Ogallala 8 Jul 2003 (Silcock 2003). The adult cited above 13 May 2004 was observed with a large group of Cliff Swallows grounded by cold weather (Silcock 2004); this bird apparently came north with migrating Cliff Swallows.

Comments: Identification of adult Cave Swallows is fairly straightforward; however, the range of variation among the thousands of juvenile Cliff Swallows that occur in Nebraska in fall makes separation of juvenile Cave Swallow at that time of year difficult. A single bird in Lancaster Co 25 Aug 2015 of uncertain age with a capped appearance and pale buffy throat was identified as this species but the report was not accepted by NOURC as “lacking in details for approval” (Brogie 2016). An update on a “possible” juvenile Cave Swallow 26 May 2014 in Lancaster Co suggested that it was best left unidentified (Tony Leukering, personal communication); Mary Bomberger Brown (personal communication) believed it was probably an early-hatched southern juvenile Cliff Swallow that moved north with Nebraska Cliff Swallows, a similar provenance suggested for the four juvenile Cave Swallow records for Nebraska. A report of a Cave Swallow at Harvard WPA, Clay Co 20 Jul 2013 was not accepted by NOURC (Brogie 2014), although the timing of the sighting is plausible.

The first three records for Kansas were 14 Jul 2001 and 26 Jul 2001 at Cheyenne Bottoms, and 27 Sep 2001 in Finney Co; most of the now several Kansas records are presumed to result from post-breeding dispersal (Thompson et al 2011). One was well-documented by Mlodinow at Prewitt Reservoir, northeast Colorado, 17 Jul 2013 (eBird.org, accessed April 2018). There are no records for South Dakota (eBird.org). 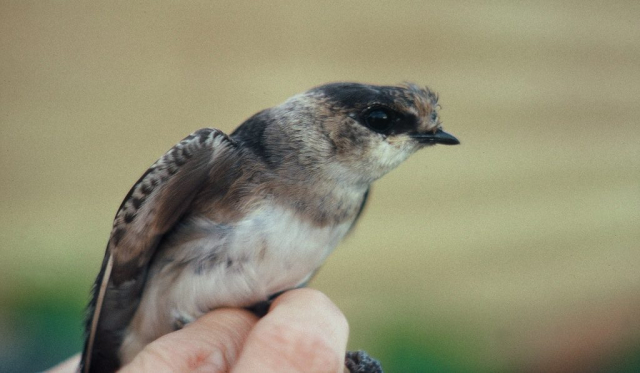