Spring: Cedar Waxwings are observed commonly in winter and because of this, timing of spring and fall migration is difficult to determine; movements are probably a mix of wandering and true migration (Witmer et al 2020).

Spring migration takes place mainly in Mar and Apr, although Robbins and Easterla (1992) observed two peaks during spring migration, an early one in Mar (which may be difficult to discern due to the presence of wintering birds), and a later peak in late May and early Jun. Robbins and Easterla (1992) suggested that the late peak is of birds wintering further south than the early peak, perhaps as far south as Mexico and Central America.

Summer: Mollhoff (2001, 2016) showed a marked increase (from 15% to 47% of occupied blocks) in breeding season reports of Cedar Waxwing between 1989-1994 and 2006-2011. There was a general increase in observations throughout the state, but westward spread was notable in major river drainages, especially the Loup and Republican, as well as in the Pine Ridge. Mollhoff (2016) proposed that part of the increase noted in breeding records “may be due to the massive expansion of Eastern Red Cedar in the state”. BBS trend analysis 1966-2017 (Sauer et al 2017) shows Cedar Waxwing numbers increased statewide 11.70% (95 C.I.; 6.73, 16.28) per year. Lowest numbers are found in the western Sandhills.

Cedar Waxwings are not conspicuous during the nesting season, likely because they are late nesters, breeding during mid- to late summer (see Breeding Phenology).

This general trend of recently increasing breeding numbers in the Panhandle and westerly stretches of major river drainages is emphasized by the scarcity of breeding records cited by Sharpe et al (2001) in those areas prior to 2000. In the central Niobrara River Valley, Brogie and Mossman (1983) did not detect nesting in the Niobrara Valley Preserve, although Youngworth (1955) took specimens in northeast Cherry Co in 1932 and considered it a rare breeder there. Fledged young were at Valentine NWR, Cherry Co 28 Jul 1984 (McDaniel; Mollhoff 2022). In the Loup drainage, there were only breeding season reports without nesting evidence prior to 2000. Even in the Platte and North Platte River Valleys, the only apparent nesting record was of a “nesting pair” near Kingsley Dam, Keith Co May 1994 (Brown et al 1996). There were, however, several breeding season reports without nesting evidence from the Platte River Valley 15 Jun-14 Jul. The Republican River Valley yielded only one nesting report prior to 2000, two nests in Dundy Co 31 May 1985 (Williams 1985), a rather early nesting date; two nests were constructed in Frontier Co by 30 Jun 2002.

Fall: Flocks of migrants are observed as early as Aug, but most arrive in mid-Sep and peak in Oct. A flock of 36 was at Fontenelle Forest, Sarpy Co 27 Aug 2006 and 30 were in Gage Co 31 Aug 2019. A fly-catching flock of 55 at Johnson Lake, Gosper Co 6 Jul 2001 was most likely a concentration of adults around a good food source at that date. Numbers generally decline into winter.

Winter: Overwintering numbers are variable. CBC data 1980-2006 indicate that Cedar Waxwings are still fairly evenly distributed across the state by late Dec; the highest CBC count was 1742 at Calamus-Loup 1 Jan 2005, and a non-CBC count was the 800+ at Alma, Harlan Co 1 Jan 1999.

Comments: In spring 2014 there were several reports of dead Cedar Waxwings in eastern Nebraska. Jorgensen (2014) researched possible causes and found that most of the deaths were associated with cotoneaster shrubs (Cotoneaster sp.), which produce berries containing cyanogenic glycosides. Two of the reported events were associated with crab apple trees (Malus sp.), which also produce the glycosides. A late spell of cold weather was likely a factor, as this tends to enhance cyanide production. 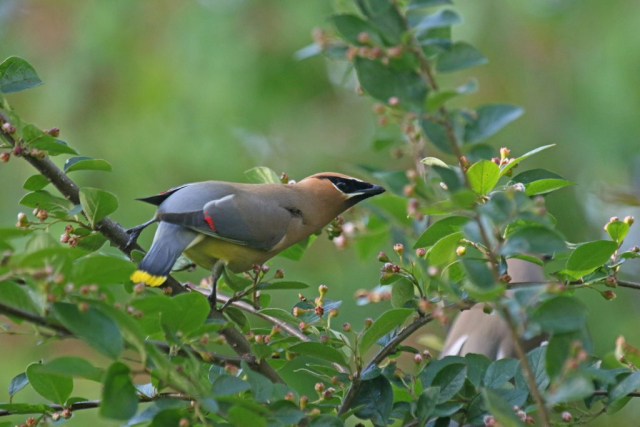 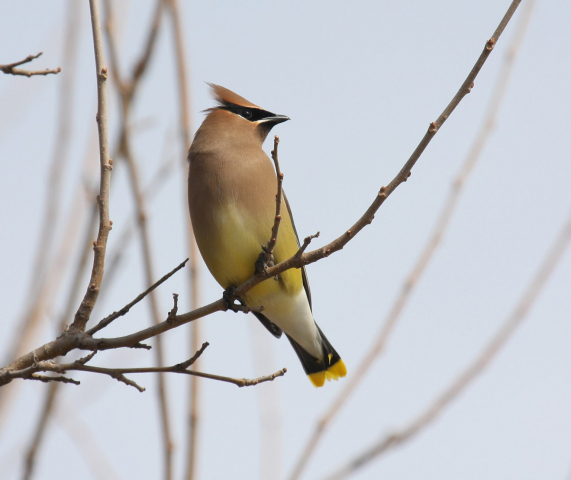 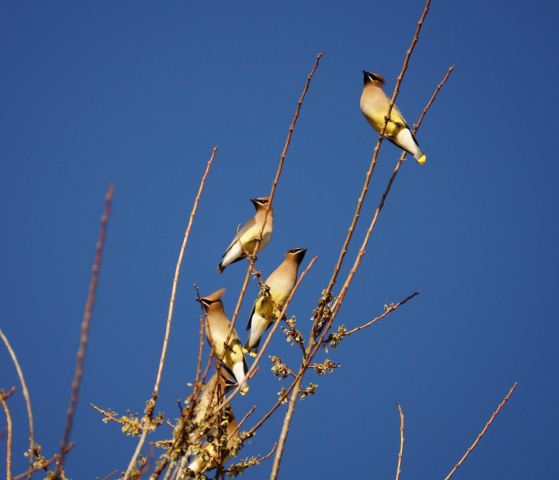