The only documented records for the central and west are:

The Sheridan Co specimen was a male collected by Short (1965) along the Niobrara River near Rushville in Sheridan Co 6 Jun 1964; while this specimen had enlarged testes it was considered to be a migrant.

Summer: Cerulean Warbler has declined over most of its range (Robbins et al 1992), although while this decline is thought to be reflected more in numbers than geographic distribution (Buehler et al 2020), it appears to have slowly withdrawn from Nebraska as a breeding species from the early 1900s to the present. Bruner et al (1904) considered it a “rather common summer resident along the wooded bluffs of the Missouri River, where it breeds”. Mollhoff (2022) listed 3-4 nests with eggs and nestlings in Sarpy Co in 1900. By the mid-20th Century Rapp et al (1958) classified it only as an uncommon “summer resident along the Missouri River.” Since 1900, however, nesting has been documented at only one site, Thomas Ashford Scout Ranch, Thurston Co. A female was gathering nesting material there 17-18 May 1997, one of four birds present (Bill Huser, eBird.org), and there were other nesting records there during the 1990s (eBird.org). The only record from Thomas Ashford Scout Ranch since is of a singing male 16 Jun 2001 (Bill Huser, eBird.org). It is interesting that during the 1990s there were reports of other southeastern species at Thomas Ashford Scout Ranch, including Acadian Flycatcher, Kentucky Warbler, and Louisiana Waterthrush (Bill Huser, pers. comm.). The ranch was closed around 2014 and the property sold to private interests.

Silcock et al (2005) reviewed the species’ status after conducting a survey in spring and summer 2004 in which only 5-7 singing males were estimated to be present in Nebraska; these were in Richardson, Sarpy, Douglas, and Washington Cos. Most years a few singing males are reported in May, usually at Fontenelle Forest and Indian Cave SP in Richardson Co. High count is a surprising five, albeit about 30 years ago at Fontenelle Forest, Sarpy Co 4 May 1992 (Grzybowski 1992). However, there were no accepted Jun-Jul records 2017-2019, only one in 2020, and none in 2021 or 2022.

Additional reports from northerly Missouri River Valley counties at sites where breeding may occur are 9 May 2021 Cuming Co (eBird.org), 13 May 2006 singing male near Newcastle, Dixon Co, and 24 May 2020 Ponca SP, Dixon Co.

As Cerulean Warbler has declined in Nebraska in recent years, doubt has been raised by Justin Rink (personal communication) that heard only singers identified as Ceruleans at Indian Cave SP may in fact be Northern Parulas; all “odd” singers that might have been Ceruleans were tracked down and found by Justin Rink to be Northern Parulas. Some or perhaps all of these “odd” songs may be an alternate Northern Parula song that Pieplow (2017) describes as a “second-category song”. This frequently heard two-part song consists of buzzy series of notes with the initial series lower in pitch than the succeeding series so sounds quite similar to a Cerulean’s song (Shari Schwartz; personal communication, eBird.org). On the other hand, “odd” songs do occur; one such singer, whose song consisted of a series of paired buzzes on the same pitch, was seen and heard in the same place at Indian Cave SP for two consecutive springs 2004 and 2005 (Paul Lehman, Ross Silcock; Silcock 2005). 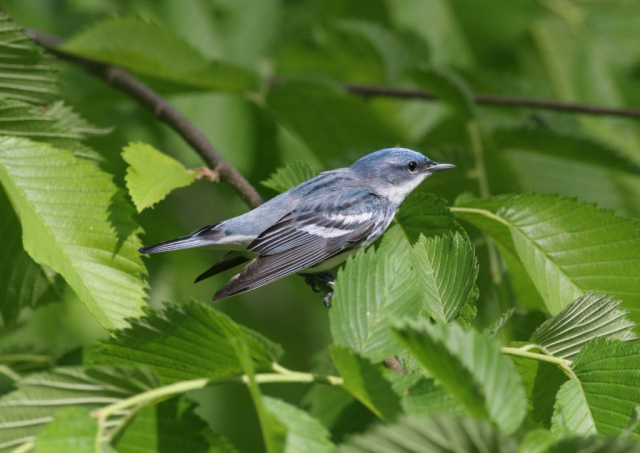