Taxonomy:  No subspecies are recognized (Pyle 1997).

Summer: This species primarily breeds in the northern Great Plains (Bleho et al 2015), with low densities breeding in Nebraska. BBS data (Sauer et al 2017) show a decline of > 87% throughout the species range since the 1960s; “breeding populations in Nebraska … have been much reduced” (Bleho et al 2020).  Mollhoff (2016) showed reports from only four BBA blocks during 2006-2011; three in Sioux County and one from Keya Paha County.

This species is most numerous in the Panhandle, where it breeds in native grasslands somewhat taller and moister than those used by McCown’s Longspur (Rosche 1982).  Snyder and Bly (2009) surveyed McCown’s and Chestnut-collared Longspurs in Kimball Co in 2007 and found McCown’s to prefer heavily grazed shortgrass prairie and bare or virtually bare cropland, with minimal overlap with Chestnut-collared nesting areas, the latter preferring lightly grazed grassland.

The breeding range as outlined by Johnsgard (1980) extended northeastward “perhaps to Cherry County”; Youngworth (1955) reported breeding birds in northeast Cherry Co in 1932 and Ducey (1988) cited breeding season reports by Rosche eastward to pastures on the edge of the Sandhills in Cherry Co and “certain meadows” in Keya Paha Co. One was at Cottonwood Lake SRA, Cherry Co 5 Jun 1991. Two males were seen in a “historical nesting locality” in Keya Paha Co 29 May 1989 (Grzybowski 1989), and Brogie and Mossman (1983) reported three observations 11-14 May 1982, presumably in the same general area.  More recently, there have been several May-Jul sightings in the Norden-Springview area of Keya Paha Co and at Hutton Sanctuary, Rock Co. In a survey for Burrowing Owls carried out in 2020 (Thiele et al 2021), several mid-May sightings (possibly migrants) of Chestnut-collared Longspurs in central Keya Paha Co and three birds in northwestern Keya Paha Co 27 Jul were suggestive of breeding.

Away from the above locations, it may have bred near Lake McConaughy, Keith Co where an apparent family group of six was found 7 Aug 2000, and one was at NNF McKelvie, Cherry Co 19 Jun 2015. One was at Willy Lake, Sheridan Co 29 Jun 2022.

There is insufficient information to determine early dates for fall migration in Nebraska, although movement of small flocks from breeding areas begins in mid-Sep (Bleho et al 2020); two were at Lake McConaughy 25 Aug 2006. Departure ends by late Sep.

Easterly reports are fewer than in spring, the only one documented a first-winter bird photographed in Adams Co 24 Sep 2006. 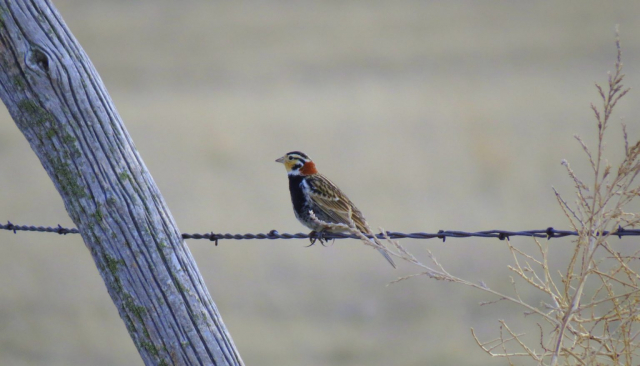 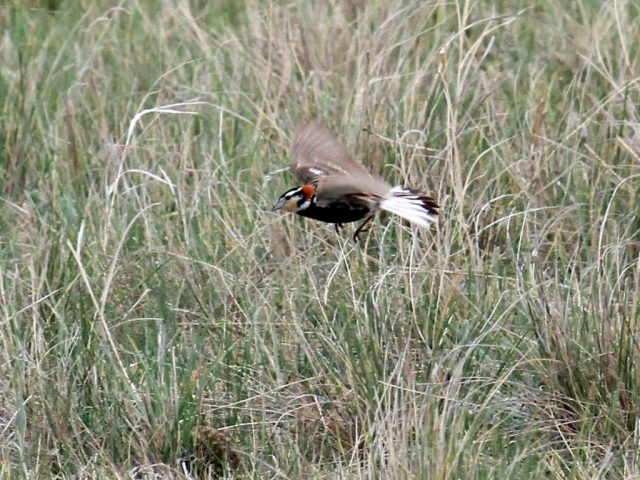