Arrival is mainly in late Apr and early May, although earliest reports are in mid-Apr in the extreme southeast and late Apr in the west. An earlier date in the west is 26 Apr 2020 Scotts Bluff Co.

Summer: The breeding range has expanded westward since settlement by Europeans, likely due to human habitation providing nest sites (Steeves et al 2020). In the early 1900s, the species was rare away from the east (Bruner et al 1904), although Bates (1900) noted that it bred at O’Neill and Atkinson. Swenk (Notes Before 1925) cited a specimen, 2626, in the Brooking collection taken at Crescent Lake, Garden Co 18 Jun 1917, Tout (1947) listed only one record for Lincoln Co, a dead bird found while cleaning his chimney in North Platte 22 Sep 1908, and Ludlow (1935) considered it uncommon “this far west,” in Webster Co, where it was not known to summer. It first bred in Brule, Keith Co in 1957 (Huntley 1958). By 1980 it was considered rare in the Panhandle (Johnsgard 1980). Ducey (1988) cited no breeding records west of North Platte, Lincoln Co, which was the westward limit noted by Rapp et al (1958).

Currently it occurs westward throughout the North and South Platte River Valleys, having been noted around Sutherland, Lincoln Co in 1956 (Short 1961), a first-time summer resident at Brule in 1957 (Huntley 1958), and first reported as a summer resident in Scotts Bluff Co in 1966.

Rosche (1972, 1982) observed Chimney Swifts at Crawford, Dawes Co from 1972 onward; there is only a single record from the northern Panhandle prior to 1972, that of birds seen at Alliance, Box Butte Co in 1956 (Mathisen and Mathisen 1958). It is now (2018) established in Alliance and in towns of the southern Panhandle, notably Chappell, Sidney and Kimball. Early reports from Sidney, Cheyenne Co 28 Jul 1994 and at Oliver Reservoir, Kimball Co 8 Aug 1996 and 21 Aug 1999 were apparently fall migrants. Two were in Bushnell, Kimball Co 25 Jun 2020. In 2005 Chimney Swifts were reported from Harrison, Sioux Co, possibly the last Panhandle town to record the species. In 2015, summer reports were from Chadron and Fort Robinson SHP in Dawes Co, and Scottsbluff, locations where the species is now established.

Most nesting now occurs in brick or masonry structures, including chimneys (Ducey 2003), but at one time this species nested in holes in trees of mature woodlands (Mollhoff 2022). Mollhoff (2001) observed that populations are declining as older buildings with chimneys are demolished, and natural nest sites are taken by European Starlings and Wood Ducks. Most nesting is solitary, but occasionally colonies occur; 20 nests with 60 young were in an old school in Hooper, Dodge Co (Stipsky 1930, Mollhoff 2022).

Ducey (2003) emphasized the importance of chimneys in downtown Omaha for breeding and post-breeding gatherings of Chimney Swifts. Steeves et al (2020) stated, however: “Loss of nesting habitat (suitable chimneys) has often been cited as the cause of population declines but has so far proven false where investigated.”

During migration large numbers gather into roosting flocks, especially in urban areas; one roost site, a church chimney near downtown Omaha, was used for several weeks in 1983 by hundreds, perhaps the low thousands; these were observed entering the chimney at dusk 16 Sep 1983 (Roger Sharpe, personal communication). Ducey (2003) estimated 3000 swifts were using eastern Omaha buildings in late Aug and early Sep 2003. Many of these, given the dates, were thought by Ducey (2003) to be local breeders; highest single-chimney tally was 1000 (Ducey 2003). 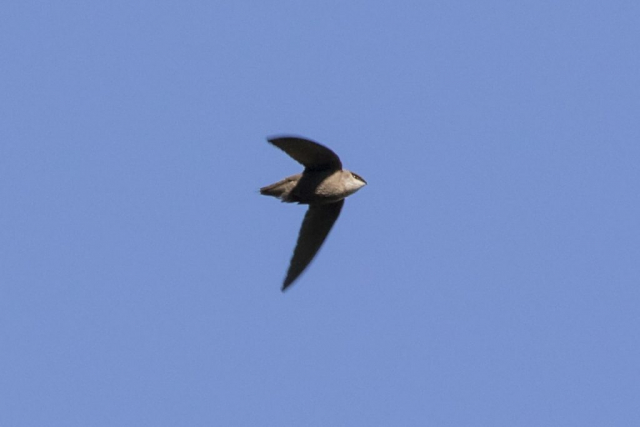