Bent (1968) stated that passerina breeds south from northeast Minnesota to eastern Kansas; Missouri Valley birds in Nebraska are probably passerina; this is the race breeding in eastern Kansas (Johnston 1965). Swenk (1906) collected a breeding pair “decidedly of the western race” at Glen, Sioux Co, 6 Aug 1905. In Bruner’s time (Bruner et al 1904), Chipping Sparrows bred at opposite ends of the state, presumably arizonae in the west on the Pine Ridge and passerina in the east.

Floyd (2011) raised the possibility that Chipping Sparrows of subspecies arizonae breeding in Colorado undergo an eastward molt migration in Jul onto the plains, and that other subspecies, notably eastern passerina, do not perform a molt migration.

Chipping Sparrows typically arrive in late Mar and peak numbers occur in early May. There are several earlier reports in Mar; such reports require documentation. However, one in Lancaster Co 1-5 Mar 2010 was photographed, as was another there 1-4 Mar 2019, and there were several early reports in 2012 after a mild winter, including 3 Mar at Fairmont, Fillmore Co and 7 Mar at Dakota City Cemetery, Dakota Co. Earliest dates in Webster Co were 6 Mar 1930, 11 Mar 1931, 12 Mar 1929, and 13 Mar 1927 (Ludlow 1935).

In areas of the southwest where breeding is uncommon, migrants depart by late May (Brown and Brown 2001).

Summer: Chipping Sparrow has adapted to the arrival of Europeans by nesting in planted trees, usually conifers, around human settlement, both rural and urban (Thompson and Ely 1992). Bent (1968) suggested that the “population of today is many times that of pre-Columbian North America.” This change has resulted in expansion of its breeding range in Nebraska from essentially east of the 98th meridian and on the Pine Ridge at the turn of the century (Bruner et al 1904) into most other parts of Nebraska. Short (1961) pointed out that most of this spread had been in towns, and that the species was still scarce in the southwest (below). BBS trend analysis reflects the increase and shows the species has increased 5.42% annually in Nebraska 1966-2015 (Sauer et al 2017)

Mollhoff (2001, 2016) showed that between the first breeding bird atlas (1984-1989) and the second (2006-2011), large areas of the Sandhills and southwest that had no breeding season reports are now occupied. There are still counties in the western Sandhills such as Box Butte Co and in the southwest, notably Perkins and Hayes, where there were no breeding season reports 2006-2011 (Mollhoff 2016). Survey transects at Fort Niobrara NWR, Cherry Co in 1991 and 1992 recorded no Chipping Sparrows, but breeding is common there as of 2021 (Renee Tressler, pers. comm.). Until recently, nesting was unknown south of the Platte River Valley west of Kearney, Buffalo Co; it was considered a migrant in Keith Co as late as 2000 (Brown and Brown 2001). Breeding reports have increased however; confirmed breeding was reported in Harlan Co in 1999, and in Dundy Co 2006-2011 (Mollhoff 2016). Chipping Sparrows were found at only 20 of 453 stops in southeast Lincoln County breeding bird surveys in 2009 (T.J. Walker, personal communication); no evidence for breeding was noted. Survey data provided by Walker from 21 blocks for the years 2006-2010 show a total of only five singing males in Dundy, Chase, Perkins, Hitchcock, Hayes, and Frontier Cos. Reports in Jun 2014 and 2015 for Hitchcock, Frontier, and Gosper Cos suggest gradual occupation by breeding birds of the southwest, and in 2017, there were multiple reports from Furnas and Gosper Cos, but only one from Hayes Co, that on 27 Jun.

Migration ends statewide by early Nov; reports after mid-Nov should be documented. The latest specimen date is 30 Oct 1909 (UNSM ZM10463). There are about 15 later reports with details through Dec; typically, Chipping Sparrows that linger into winter are single immatures at feeders.

Migration begins in Aug, although it is difficult to determine early departure dates because of local breeders and migrants from elsewhere. A recent hypothesis suggests an early molt migration strategy for several passerine species which have populations in drier parts of the inter-mountain western United States (Donahue 2007). Indeed, Floyd (2011) documented eastward movement in Jul towards the plains in eastern Colorado and Kansas, and showed that these birds were essentially all adults; it is generally inferred that if adults move away from breeding areas in fall before juveniles, molt migration is taking place (Floyd 2011). Thus in areas of southwest Nebraska where there are few breeding Chipping Sparrows, Jul records of adults may be of molt migrants from the Rockies; however, since subspecies arizonae breeds in western Nebraska, the presence of breeding Chipping Sparrows in, for example, the Sandhills, would make their detection difficult if not impossible.

The abundance of this species during fall migration was indicated by the banding by Bird Conservancy of the Rockies personnel of 151 individuals 19 Aug-2 Oct 2013 at Wildcat Hills NC, Scotts Bluff Co; there were only 11 additional recaptures from previous years, one of which was first banded in 2008. 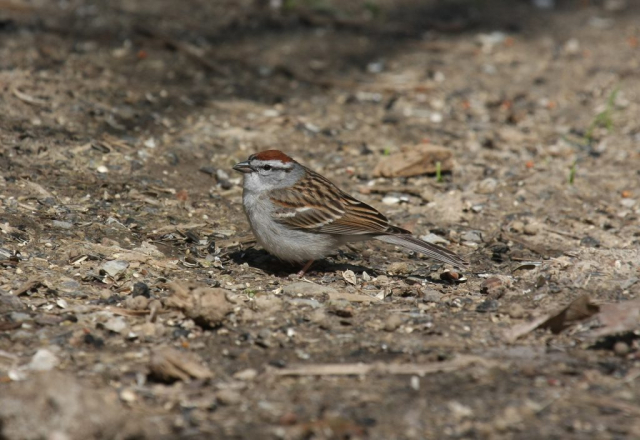