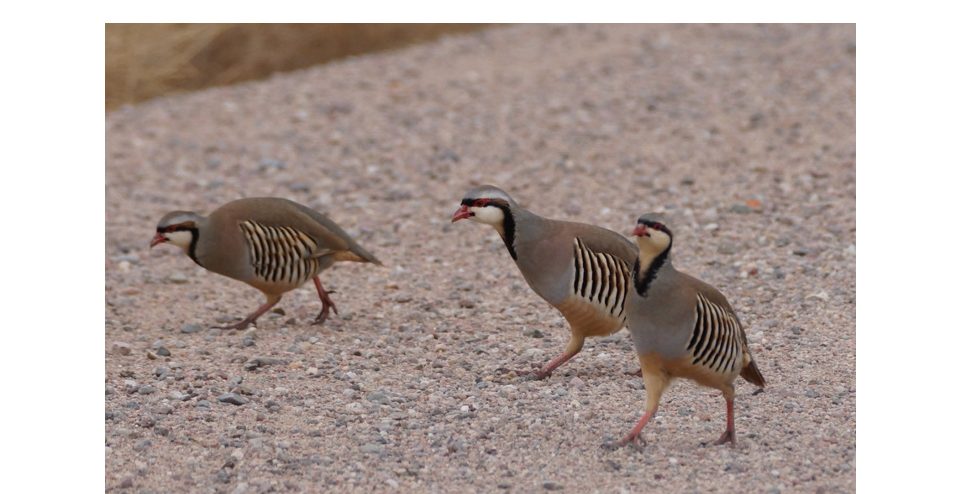 Taxonomy: There are 14 subspecies in the native Eurasian range (Clements et al 2016).

Comments:  Several attempts were made to establish this species in Nebraska with the releases between 1938 and 1943 of about 6500 birds, but these were unsuccessful, possibly due to predation (Mathisen and Mathisen 1960, Halbert 1940). Ducey (1988) cited nesting reports from Logan, Madison, and Sheridan Cos in the 1940s. A notable release was of 700 birds in southern Scotts Bluff Co in 1969 (Johnsgard 1997); there were consistent reports from Scotts Bluff Co from this time until 1977, as well as a more recent report 19 Mar 1984 which was apparently derived from private releases made in the Robideaux Pass area 1981-84 (Cortelyou 1984). Five were photographed along Wright’s Gap Road in Banner Co 15 Feb 2014. A population apparently persisted for some time in the Sheridan Co sandhills (Johnsgard 1979), although none were seen after 1977 (Rosche 1982), and possibly on the Pine Ridge in the Fort Robinson area in the 1970s (Rosche 1982).  One seen in southern Sioux Co 4 Apr 1998 was “probably part of a flock set free by a local rancher some years ago” (Helen Hughson, personal communication). A release in northern Rock Co “a few years ago” may have been the source of two seen four miles north of Bassett, Rock Co  9 Jun 2019 (Carolyn Hall, pers. comm.).

There is a possibility that a population might establish from released birds in suitable habitat such as the Panhandle or arid parts of southwest Nebraska.