The single Nebraska specimen was assigned to the migratory Atlantic Coast subspecies crepitans.

Record: The only record was of one caught in a mink trap about 12 miles east of Stapleton in Logan Co. The identification was confirmed by J. Van Tyne, who determined it to be a “typical Northern Clapper Rail,” the Atlantic coast subspecies crepitans (Rapp and Rapp 1951). The specimen has grey cheeks which do not contrast with the greyish neck coloration. 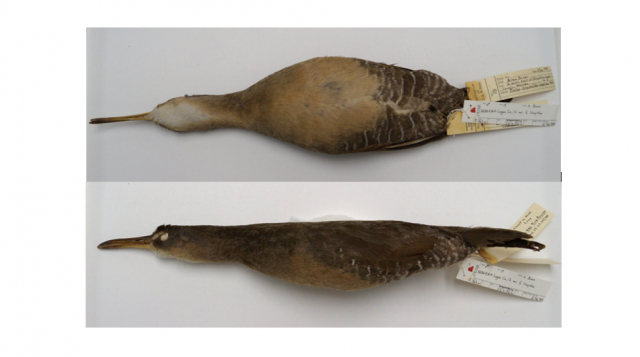 Photograph (top) by Joel G. Jorgensen of a Clapper Rail specimen (UNSM ZM14120) collected near Stapleton, Logan Co 30 Jan 1951. The specimen is housed and maintained at the University of Nebraska State Museum and was legally salvaged or collected. We thank Thomas Labedz for facilitating the photographing of this specimen for the Birds of Nebraska – Online.