Summer: This species is not known to breed regularly in Nebraska; the three records of breeding have occurred following significant irruptions. Clark’s Nutcrackers have remained into summer after the 1972-73, 1968-69, 1986-87, 1996-97, and 2004-05 irruptions, although evidence of breeding has been noted after only three of these influxes. Ducey (1988) cited information regarding a begging juvenile in Sowbelly Canyon, Sioux Co in May 1987; this record was reported later by the original observer (Tomback 1995). Although breeding could not be confirmed by another observer (Williams 1987b), the large number of birds involved in this 1986-1987 irruption supported the likelihood that breeding indeed occurred (see also Mollhoff 2001). A single bird first noted in Morrill, Scotts Bluff Co 8-9 Jan 1997 following the 1996-1997 irruption was paired during the second week of Feb and a young bird with brown feathering in its wings was noted at a feeder 7 May; at least one bird remained until 4 Jun 1997 (Mollhoff 1997). Following a large incursion in winter 2004-2005 of as many as 50 birds, seven in Monroe Canyon, Sioux Co were showing courtship and nest-building behavior (Stephen J. Dinsmore, personal communication); later visits in Jun found no evidence of breeding success, however, probably from a shortage of food due to a cone crop failure in 2004 (Mollhoff 2005).

Other breeding season reports without evidence of breeding and following irruptions were of four in Monroe Canyon 25 Jun 1973 (Rosche 1982, Williams 1973a) and several in the Wildcat Hills of Scotts Bluff Co in summer 1969 (Gates 1970). Additional isolated reports from Sowbelly Canyon 24 Jun 1999 and 16 Jul 1994, and 18 Jun 2006, as well as nearby Pants Butte Road, Sioux Co 12 Jun 2008 were also unaccompanied by any evidence of breeding.

Clark’s Nutcracker is a rare resident of the South Dakota Black Hills, but there are virtually no records elsewhere in that state (Tallman et al 2002), suggesting that birds appearing in Nebraska follow the North Platte River Valley from Wyoming, where breeding occurs as close as 40 miles from Nebraska.

This eruptive montane species has been reported at least 55 times. Many of the reports are from ponderosa pine habitat on the Pine Ridge and in Scotts Bluff Co and the major irruption of 1972-73 provided most of the remaining reports away from those areas (as in Kansas, Thompson et al 2011). A single bird, an early indication of the Pine Ridge irruption to follow, was as far east as Lincoln Co 30 Aug 2004 (Brogie 2005). 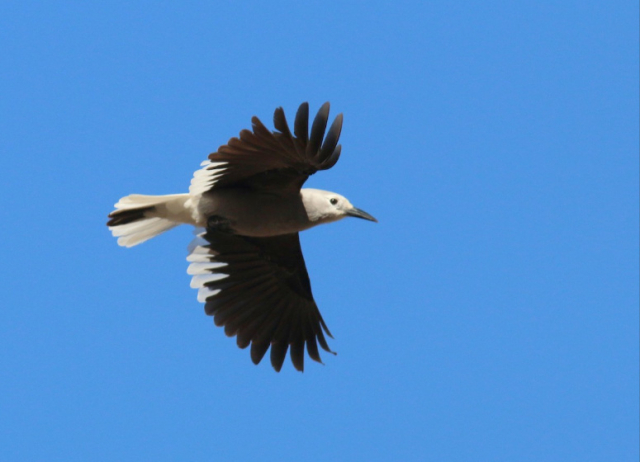