Migration is from mid-Apr through late May.

Summer: There is no evidence to confirm breeding in the state, despite statements to the contrary by AOU (1957, 1983) and Bent (1968). There are several statements in the literature that imply breeding, but none eliminate the possibility of confusion with Chipping Sparrow, or late spring or early fall Clay-colored Sparrow migrants. Perhaps of most interest was a report of one netted 8 Jul at Lake Ogallala, Keith Co that had a brood patch (Brown et al 1996); this date is early for a fall migrant and is plausible as a local breeder based on egg dates in North Dakota and Minnesota, which range from mid-May through late June (Winter et al 2004; Grant and Knapton 2020). There is an intriguing report of nesting near Rushville, Sheridan Co around 1956 which stated “Song, Vesper, Lark, Clay-colored, and Field Sparrows nest in the tall grass by the buildings” but also mentioned that large flocks of Chipping Sparrows were present there for three weeks in the spring at a time when Chipping Sparrow was a rare breeder in central Nebraska (Gates 1956).

Mossman and Brogie (1983) found two singing, territorial birds during the 1982 breeding season, both in Brown Co sandhills, and considered this species a “Probable nester”. Youngworth (1955) also considered this species a rare breeder in the same general area. The Mossman and Brogie sightings were 25 May and 1 Jun; the possibility of them being migrants cannot be ruled out. One was recorded in Dixon Co 12 Jun 2020 (eBird.org). Clay-colored Sparrow breeds relatively close to Nebraska in north-central and northeast South Dakota (Tallman et al 2002) and more recently in Gregory Co (north of Boyd and Keya Paha Cos in Nebraska) in south-central South Dakota (Drilling et al 2018). BBS data (Sauer et al 2017) indicate the species has recently increased in numbers.

Migration is from late Aug through early Nov, peaking during Sep. Occurrence is statewide, although much larger numbers are seen in the western half of the state in fall.

Winter: The only report of overwintering is of one at a feeder in extreme southeast Sioux Co Dec 2002-Feb 2003; it was netted 12 Feb and found to be healthy except that it lacked one eye (Ruth Green, personal communication).

Comments: Wayne Mollhoff provided information from notes made by L. M. Gates of a visit to Scotts Bluff Co in 1913 with Swenk in which five nests of Brewer’s Sparrows (originally thought to be Clay-colored Sparrows) were observed at the University Experiment Station Farm. There are no subsequent nesting reports from Scotts Bluff Co. Perhaps this correction might be applied to a statement by Neidrach (1932) that Clay-colored Sparrows bred in the 1930s on streams near and southeast of Pine Bluffs while Brewer’s Sparrows bred on the neighboring uplands, although the mention of both species is interesting. 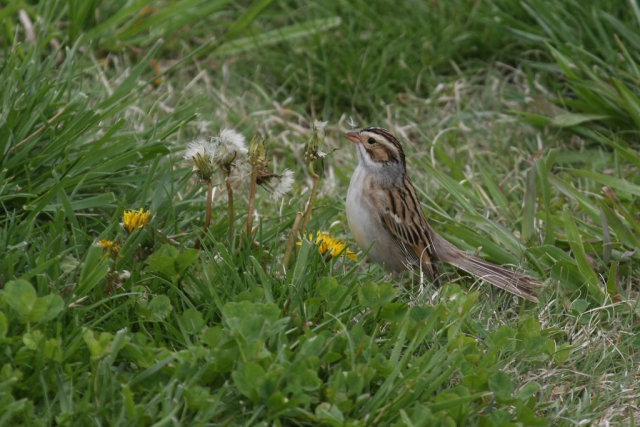 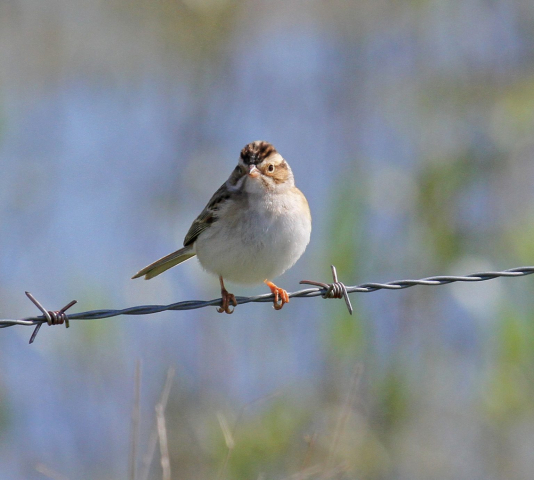 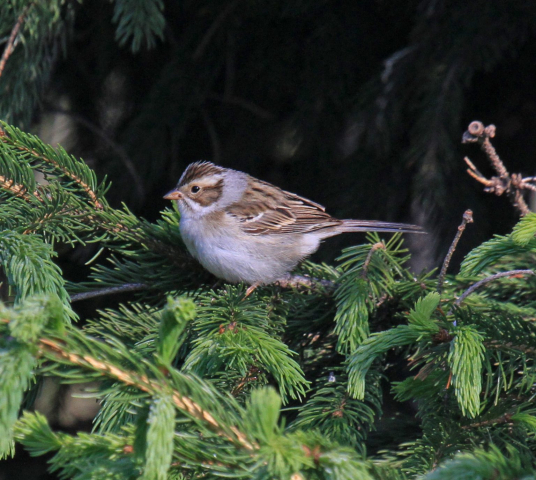