Spring: The first Nebraska record was of one seen several times 25-31 Mar 1972 between Hershey and North Platte in Lincoln Co; it is conjectural whether it was a different bird than that seen and photographed near Elm Creek 31 Mar-1 Apr 1972 (cited above). It is likely that the 22 records can be accounted for by fewer than 19 individual birds. The Nebraska records constitute about two thirds of all North American records (Silcock and Dinsmore 1999), not including reports from the eastern United States discussed below (see Comments).

In addition to the two records discussed above, the records are:

27 Jan-25 Feb 2012, one in Hall Co (Brogie 2013). This bird appears to have been associated with a group of Sandhill Cranes that wintered in the area and probably departed with them.

10 Mar-6 Apr 2000, one associated with a Sandhill Crane and accompanied by two apparent hybrid young in the Prosser area, Adams Co (Mark Urwiller, personal communication); this may have been the same family group that was seen in Quebec and Indiana in fall 1999 (see below).

10 Mar 2007, one with about 1000 Sandhill Cranes on private property near Lewellen, Garden Co

Comments: Common Crane is an Eurasian species, breeding within 600 miles of (Lesser) Sandhill Cranes in northeast Siberia. There are several reports from the eastern United States, including hybrids with Sandhill Cranes. A Common Crane in New York, Vermont, and New Jersey during 1991–1996 was a known escapee. It bred with Sandhill Cranes and produced hybrid young (Howell et al 2014). A family group, possibly including some of the 1991-1996 birds, was in Quebec 7 Oct and Indiana 30 Oct-13 Nov 1999. 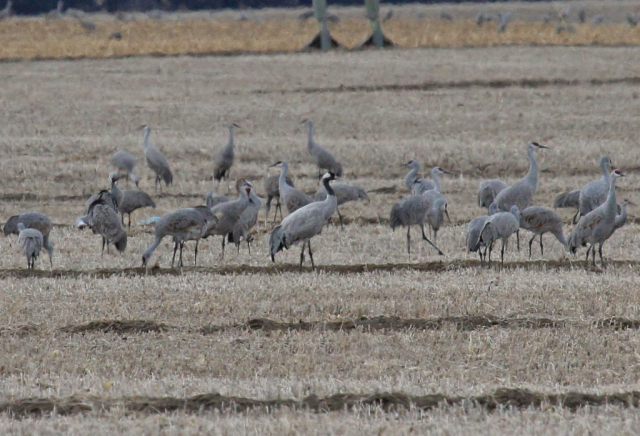