The Nebraska specimen cited above was determined by Paul Johnsgard to be of the subspecies sedentaria (Tate 1969).

Record: There is one record, the specimen cited above, which consists of a head and one foot. It was shot by a hunter and the remains brought to UNSM by Nebraska Fish and Game Department (now NGPC) personnel and prepared as a specimen by D. Jean Tate (Tate 1969).

A specimen collected 1 Nov 1901 near Sioux City on the Missouri River was identified as v-nigrum (DuMont 1934a, 1934b; Kent and Dinsmore 1996). Tate (1969) noted that this record could as well apply to Nebraska, as its site of collection is not accurately known (Silcock 1992); DuMont (1934a) noted that it was “Found in market. Brought in by hunter from Missouri River bottoms below city.”

Comments: The interior subspecies sedentaria is non-migratory, overwintering in polynyas in southern Hudson and James Bays, and thus unexpected as a vagrant in the Interior. Indeed, Mlodinow (1999), described the Nebraska record of this non-migratory subspecies so far from its usual haunts as “almost incredible.” Mlodinow (1999) noted as of 1999 there were 33 records of Common Eider in western North America, fully 30 of which were in the Interior, mostly between 15 Oct and 10 Dec on large lakes. Most of these are from Manitoba, Saskatchewan, North Dakota, and South Dakota; 19 of the 21 records from the western Canadian interior are from Saskatchewan and Manitoba (away from Hudson Bay) and seven of the nine records from the western United States are from the Dakotas but none from heavily birded Colorado or eastern California (Mlodinow 1999).

There are no records from states adjacent to Nebraska since 1999. AOU (1957) noted that the western subspecies S. m. v-nigrum had occurred in Kansas, a specimen collected 3 Nov 1891 in northeast Kansas (Thompson et al 2011). Apart from the Sioux City record cited above, one in southeast Iowa 27 Jan-7 Apr 1995 was considered to be v-nigrum, and based on three specimens, the species is considered a casual fall migrant in South Dakota (Tallman et al 2002). No records were listed for Colorado (CBRC 2018). 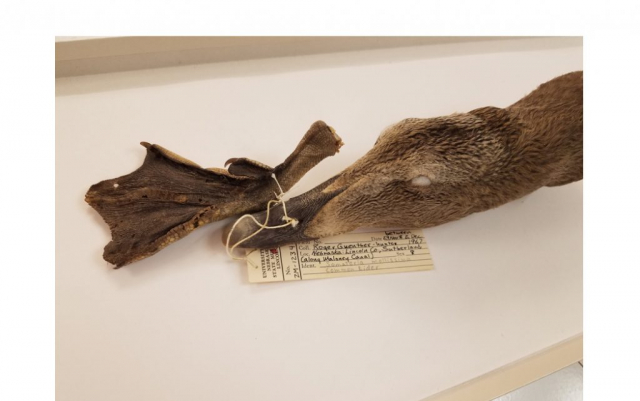 Photograph (top) of a Common Eider head and foot (UNSM ZM12341), from a bird taken in Lincoln Co about 29 Nov-2 Dec 1967, by Ross Silcock. The specimen is housed and maintained at the University of Nebraska State Museum and was legally salvaged or collected. We thank Thomas Labedz for facilitating the photographing of this specimen for the Birds of Nebraska – Online.