Jaramillo and Burke (1999) consider stonei to apply to birds in a hybrid zone between versicolor and quiscula; the zone has been moving north in recent years.

Males generally precede females; in Finney Co, Kansas, careful counts by Tom Shane in 2006 showed that 8-16 Mar most were males; females had increased to about 20% by 16 Mar.

Summer: Common Grackle breeds in woodland edge habitats, and is partial to areas with planted trees, especially conifers, such as windbreaks, residential areas, and parks, which have increased numbers of breeding birds westward. Breeding birds occur statewide, but BBS data indicate that they are most numerous in southern and eastern Nebraska where human population is greatest. Brogie and Mossman (1983) found it abundant in the Niobrara Valley Preserve, with 74 nests located in their study area in 1982. In the northwest, Rosche (1982) considered it a common summer resident.

An apparent juvenile capable of flight was photographed at Hastings, Adams Co 4 Apr 2009; its provenance at that date is difficult to explain.

Migration probably peaks during Oct (Johnsgard 1980), when huge flocks occur. By late Dec, CBC data show that over 85% of Common Grackles still in the state are in the east.

Winter: Away from the south and east winter range, there are only about 26 reports mid-Nov through Feb. The only report of overwintering in the west is of six birds at a Gering, Scotts Bluff Co feeder 2002-2003; eight were in Scotts Bluff Co 13 Feb 2021, and a single was near Mitchell, Scotts Bluff Co 18 Feb 2022.

Rosche (1982) noted that in the northwest “a few attempt wintering each year, but few are successful as numbers decline markedly after early February.” 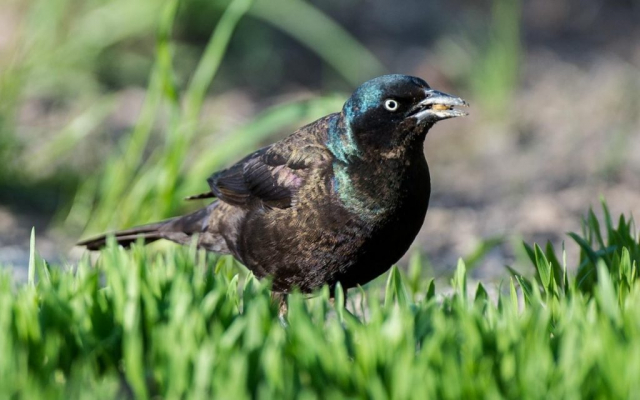