Taxonomy: There are 11 subspecies recognized, seven in Eurasia; North American subspecies are kamtschaticus of western Alaska, principalis from northern Alaska to Newfoundland south to southwest British Columbia and Maine, in mountains to Pennsylvania and Georgia, sinuatus from eastern Washington to Montana south to south-central Arizona and Texas, and clarionensis from western Washington to southern California and southwest Arizona (Pyle 1997).

Nebraska birds are presumed sinuatus, the subspecies that occurs in Colorado (Leukering 2015), although eastern reports may be of birds from areas to the north of Nebraska, such as principalis.

Recent genetic data suggest that western USA Common Ravens may be more closely related to the Chihuahuan Raven than they are to Common Ravens from Alaska, Minnesota and the Old World (Boarman and Heinrich 2020).

Summer: There are two records since 2021.

In 2021, a single bird was discovered 1-4 Jan about five miles south of Harrison, Sioux Co on Highway 29 (Kathy DeLara, cited above), and later, in Apr, two birds were discovered about 12 miles away on Buckley Road 4 Apr by Colin Croft (photos, eBird.org). These two were seen and photographed by many 4 Apr-31 May (eBird.org) and were feeding on a cow carcass later in May. It is not known whether the single Jan bird is one of the Buckley Road pair. Later, on 13-14 Jun, two birds were in the area, and apparently nesting as one carried a toad for at least a mile 14 Jun, possibly feeding young. Singles were seen in the area 23 Oct and 27 Nov 2021. Possibly the same pair was found at Mile Marker 18 on Highway 2, Sioux Co 18 Dec, some 9-10 miles north of the Buckley Road location (eBird.org).

In 2022, a single bird was photographed at Stegall Road and County Road X, Scotts Bluff Co 8-9 Jul (Olivia DaRugna, Stephen Brenner, eBird.org). The observers’ description follows: “Large Corvid with massive bill, long head, bulky overall, long wings. Tail large and not squared off as in crow – not classically wedged but photos show tail feathers rather worn and frayed. Soared with minimal flapping when flying. Heard a few distinct, guttural croaks. Photos. Bird was perching just beyond small prairie dog colony on north side of road, very close to checklist point location. Flew back to hills out of sight after about 2 mins of distant obs.”

Winter: Unfortunately, Nebraska reports of Common Raven, though numerous, had been poorly documented, if at all, until 2021. Most were in the period Sep-May. We accept the following three reports prior to 2021:

Following, for completeness, we list all other reports, some of which may possibly be correct, but none acceptably documented. There are four Scotts Bluff Co reports: 26 May 1958, 1 Apr 1962, one in a yard at Gering 2 Feb 1983, and at about the same time four reported from a canyon southwest of Gering (Cortelyou 1983). Additional reports in and near the Panhandle are of one viewed briefly 1 Jan 2018 Red Willow Co (Akers, eBird.org, accessed April 2018), one seen along Interstate 80 in Kimball Co 8 Jan 2018, one over Dundy Co 20 Apr 2005 (eBird.org, accessed April 2018), one reported based on calls heard in the “cliff forests” of Fort Robinson SP, Dawes Co 30 May 1999, another that gave its “typical raven call” while kettling with Turkey Vultures which roosted in pines at Chadron SP, Dawes Co 20 Sep 2001, and 15+ “circling” over Sowbelly Canyon, Sioux Co 29 Oct 2004.

Several observers reported three Common Ravens at the North Platte Applebee’s Restaurant for the North Platte CBC 22 Dec 2015. The next day, one was at the local Burger King and another was seen nearby. They were not seen again, and none were photographed. These reports were not accepted by the NOURC; the single submitted report, for 23 Dec 2015, lacked a photo and no vocalizations were heard (Brogie 2016). Nearby, but a year later, two that were heard to “croak” were reported at the North Platte Wendy’s restaurant 27 Feb 2016.

Comments: The historical record is weak, but based on anecdotal evidence, Common Raven apparently occurred statewide and was fairly common until about 1877, when the disappearance of bison led to its rapid decline (Bruner et al 1904, Johnsgard 1980). Ducey (1988) listed sightings, including an 1820 breeding record, for the Missouri River Valley prior to 1900. This record was by Thomas Say at Engineer Cantonment, Washington Co and involved adults and young birds nearly able to fly (Mollhoff 2022). During the 20th Century, reports were sporadic and undocumented (Sharpe et al 2001); the only accepted reports in that period are included below.

In recent years, however, numbers are increasing on the Great Plains east of the Rocky Mountains, generally west and south of Nebraska. There are now 33 reports for South Dakota, most relatively recent; 20 of the reports are Oct-Dec, none in Jan-Mar (David Swanson, personal communication). In eastern Colorado numbers are increasing along the Front Range (Boulder County Audubon Society 2015) and there are several reports from counties adjacent to Nebraska; these are Yuma, Phillips, Sedgwick, Logan and Weld (eBird.org, accessed April 2018). In Wyoming, “anecdotal evidence implies an increase in numbers in recent years near their eastern range limits” at Casper and Wheatland (Faulkner 2010), there are three sightings from the Table Mountain area in Wyoming Apr-May, only about 6-7 miles southwest of Lyman, Scotts Bluff Co (eBird.org, accessed April 2018), and four were seen in Pine Bluffs, Wyoming 28 Nov 2015, less than a mile from Nebraska (eBird.org, accessed September 2017). In Kansas, Common Raven has only recently returned, when a pair nested in Morton Co in the southwest (Thompson et al 2011). In Oklahoma, Common Ravens are “getting out in the open plains, and should be considered a viable option, in winter especially” (Joseph Grzybowski, personal communication).

As suggested in the previous paragraph, recent occurrence in western Nebraska should not be unexpected from fall through spring. American Crows, often observed in flight and at a distance, have been reported as Common Ravens on a number of occasions, usually by non-residents unfamiliar with the status of Common Raven in the state. Even among the reports cited above from nearby states, none within 40 km (25 miles) are documented. Given these considerations, a conservative reviewer could defensibly conclude that there is insufficient evidence that Common Raven has occurred in Nebraska since 1900 (until 2021). Here, we have chosen to cite reports which we believe may be correct identifications based on details submitted by the observers, including those submitted to, reviewed by, and accepted by NOURC. Some reports below were accepted by NOURC as “Raven, sp.”; for example, one in Brown Co 29 Dec 2006 was not accepted because it “was not heard” (Brogie 2008) but it seems highly unlikely this could have been a Chihuahuan Raven at that location and date. 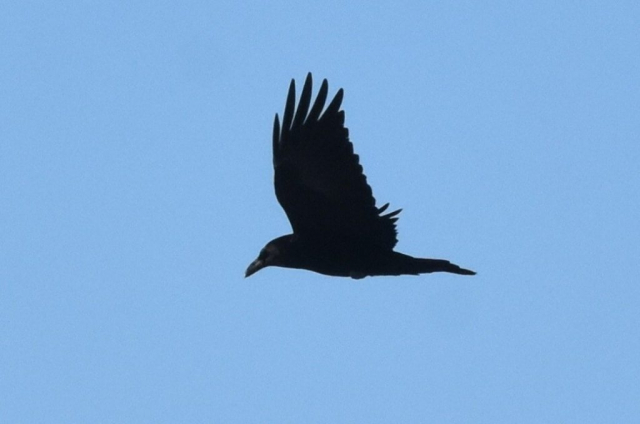