Taxonomy: Gill and Donsker (2017) recognize seven subspecies, but other authors (Pyle 1997, Tweit 2020) recognized two subspecies, corresponding to the two phenotypically recognizable groups (Rojas-Soto 2003, Rojas-Soto et al 2007). When seven subspecies are recognized, Western Group has four subspecies, one of which, palmeri, sometimes referred to as “Cholla Thrasher”, occurs north of Mexico, from the southwestern USA to Mexico, and Eastern Group has three subspecies, nominate curvirostre occurring in Mexico and two subspecies north of Mexico: celsum of south-central USA and north-central Mexico, and oberholseri, of south Texas and northeast Mexico. Subspecies celsum is poorly differentiated and was merged with oberholseri by Phillips (1986).

As suggested above, taxonomy of this species has been unsettled. Rojas-Soto (2003) and Rojas-Soto et al (2007) showed in morphological studies that there are phenotypically identifiable western (palmeri) and eastern (curvirostre) groups; although mtDNA studies by Zink and Blackwell-Rago (2000) confirmed the presence of two genetic groups, the boundary between them differed somewhat from that suggested by phenotypic studies. A proposal to elevate the groups to species status was declined (NACC 2014).

Subspecies palmeri is less likely to occur in Nebraska and nearby states based on its summer range and apparent lesser propensity to disperse (Tweit 2020). It has been reported three times in Nebraska, including the specimen cited above, although two reports, Loup Co in 2016 and Crescent Lake NWR in 2017 are here considered equivocal.

Young birds of both subspecies wander widely, especially those of oberholseri (Tweit 2020). There are many records of vagrants to the north and east of the normal resident range (eBird.org, accessed April 2017). Further study is needed to provide an understanding of the role of dispersal in the life cycle of Curve-billed Thrashers and to resolve questions about migration (Tweit 2020).

Resident: Assigning occurrence status to this species in Nebraska is difficult. Given, however, that it is resident in its normal range, and that vagrancy by young birds is quite common, we believe that these birds attempt to set up territories but eventually fail after varying residence periods. The longest-lasting bird of the 10 Nebraska records lived on the Frimann Ranch in southeast Sioux Co for almost six years (see below).

There are 14 reports, 10 acceptably documented:

Undocumented reports follow. Breeding was reported in the Lawrence Fork area of Morrill Co Jun 1965 which could not be confirmed by later searches of the area (Viehmeyer 1971). A dead individual was reportedly recovered and then disposed of when the 4H Camp building at NNF Bessey, Thomas Co was opened in Mar 1970. It was assumed that this bird had been trapped in the building when it was closed for the winter in Oct and died. Those present identified the bird as a Curve-billed Thrasher, but no details were published (Cortelyou 1970). A report of one at Scotts Bluff NM, Scotts Bluff Co 16 Jul 2013 was not accepted by NOURC (Brogie 2014).

Comments: An interesting development related to the long-staying (2002-2008) bird at the Frimann Ranch was the presence within a brood of otherwise normal Brown Thrashers there of one with a gray head and back (Joseph Gubanyi, personal communication; Mollhoff 2022). There is a previous record of a possible hybrid between Curve-billed and Brown Thrashers (Phillips 1986).

There is a nesting record less than 10 miles south of Kimball Co in Weld Co, Colorado; a nest with eggs was photographed 16 May 2017 (Mlodinow, Rutherford, eBird.org). 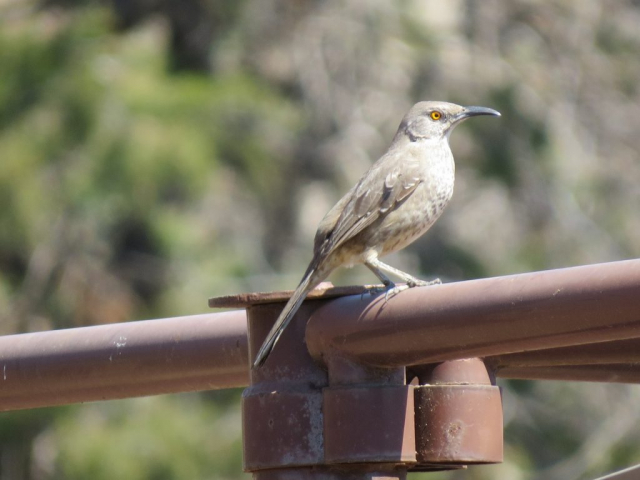