There have been varying treatments of the sub-specific taxa within this species over the years; some have been considered full species at times (Nolan et al 2002). Current authors (Pyle 1997, Nolan et al 2020, Clements et al 2016, Gill and Donsker 2017) divide the taxa into several groups but vary as to which taxa are included in each. Herein, we treat the subspecies in groups as follows: (1) Slate-colored: hyemalis, carolinensis, (2) Cassiar: cismontanus, (3) Oregon: oreganus, shufeldti/montanus, thurberi, pontilis, pinosus, (4) Pink-sided: mearnsi, townsendi, (5) Gray-headed: caniceps, dorsalis, and (6) White-winged: aikeni.

Junco subspecies are not uniformly distributed across the state in winter as all but Slate-colored occur in higher proportions in central and western Nebraska based on CBC data (Table 1, see below).

Most depart by late Apr, although peak migration is in late Mar-early Apr; it was “abundant” in Saunders Co 12 Mar-18 Apr 1994.

One that was inside a Walmart store in Omaha, Douglas Co through winter and spring 2003-2004 was still present 22 Jun 2004, feeding on spilled bird seed. A female at the Gavin’s Point Dam Visitor Center, Cedar Co for “a few weeks” through 30 Jul 2014 may have actually been an immature male that molted in late Jul; an “adult male” was reported there 30 Jul-1 Aug 2014.

Included here are those juncos unspecified as to form and away from the Pine Ridge; “Slate-colored” Junco is by far the most numerous form statewide. Migrants arrive in the west and north in mid-Sep and are statewide by late Sep; peak movement is in Oct (Johnsgard 1997).

Subspecies cismontanus may be a “stable population of apparent hybrids between Slate-colored and Oregon [presumably mearnsi] Juncos” (Rising 1995, Wright 2013), although it is generally identifiable in the field, especially males, which resemble “Slate-colored” Juncos with blackish hoods and on occasion very limited pinkish anterior flanks. Females are similar to some female “Oregon” Juncos, but usually show at least some grayish flank wash, unlike the latter, but “are often completely indistinguishable from either Oregon or Slate-colored Juncos, or, most signally, from hybrids and intergrades that blur the features of both” (Wright 2019). Furthermore, Wright (2019), in noting that “Classic black-hooded, gray-flanked, Cassiar-like males … have been photographed as far east as Nova Scotia and New Jersey”, pointed out that “even in those cases, there can be no certainty that the birds are not hybrids [presumably used in the strict, F1 hybrid sense] rather than genuine cismontanus…”.

eBird (eBird.org) offers a reporting option “Slate-colored/cismontanus“, presumably for birds not clearly cismontanus; there are several such reports in eBird.

An apparent female cismontanus in a Sarpy Co yard 17 Mar 2021 had a prominent white feathered eye ring and was likely the same bird there 24 Oct 2020 (Phil Swanson, pers. comm.; photos).

Wright (2013) discussed the presence of eight specimens at UNSM of this taxon; three of these were the Long Pine specimen cited above and two collected at Lincoln, Lancaster Co (Moser 1946, AOU 1957).

This subspecies usually occurs with Slate-colored Juncos, and so its temporal distribution may be similar. There are few data, but as observers become more familiar with it, observations will increase.

Eight were reported statewide in fall 2020, and 28 in fall 2021; numbers will likely increase as observers are more familiar with his form. See comments under Spring.

The discussion regarding shufeldti and montanus is pertinent to Nebraska. There are two specimens at UNSM labeled as both shufeldti and montanus (ZM 10375, 8 Dec 1910 Dawes Co, and ZM 10377, 3 Dec 1910 Dawes Co), indicating the confusing taxonomic environment that existed for many years. Bruner et al (1904) were perplexed also, noting that records of “Oregon Junco” for Nebraska “should probably be placed“ under J. h. shufeldti or J. montanus, but “Just which one is referred to in each case is now impossible to definitely state owing to the extreme similarity of the two species, but it is certain that both are represented”. Of course, the recent synonymization of the two (Pyle 1997, Browning 1990) renders the confusion moot.

The occurrence of simillimus in Nebraska is as yet undocumented but not unlikely, however, as its range corresponds with other Pacific Northwest taxa that occur in Nebraska in fall, such as Cassin’s Vireo, Townsend’s Warbler, and various subspecies of Hermit Thrush.

There are a few reports with photographs of apparent Oregon x Pink-sided Juncos (eBird.org).

The limited available data indicate that “Oregon” Junco arrives later in fall and leaves earlier in spring than “Slate-colored” Junco, especially in the east.

Winter: Rosche (1982) stated that “Pink-sided” Juncos are the most common form in the northwest in winter, followed by “Oregon” Juncos and “Slate-colored” Juncos. A similar mix was reported by Rosche (1994) in the Keith Co area, although Tout (1947) stated that “Pink-sided” Juncos were “not common” in Lincoln Co, and Brown and Brown (2001) noted that most in the Keith Co area were “Oregon” Juncos.

“Oregon” Juncos are far more common in the Panhandle than easterly, as indicated in the table above. Banding studies indicated that “Oregon” Juncos comprised about 10% of juncos in the east, increasing to 50% at Alda, Hall Co (Tom Labedz, personal communication).

See White-winged Junco (below) for discussion of apparent intergrades with that form.

Winter: The highest numbers occur in the west (Rosche 1982) but decline rapidly eastward. See CBC data in table above.

We consider the following bird to show characters of intergradation with Oregon Junco such as blackish markings in a darker gray “bib” and grayish feathering on the flanks: 22 Jan-12 Feb 2021 Douglas Co ebird.org/checklist/S79792038.\

There have been many reports of “Gray-headed” Junco in Nebraska, most undocumented, and it is likely that many of the latter are in fact examples of hybrids between various forms of “Oregon Junco” or brightly-marked examples of mearnsi. Sutton (1975) collected several birds resembling this form in Oklahoma but none were found to be true “Gray-headed Juncos”.

A photograph of a bird in Omaha Mar 2006 shows what appears to be a hybrid between “Gray-headed” and “Oregon” (likely mearnsi Pink-sided) Juncos, often referred to as “Ridgway’s Junco” (Wright 2019, Rick Wright, pers. comm.), a rare occurrence in itself, especially in eastern Nebraska.

Winter: There are only 21 accepted records, despite about 57 reports and the statement by Tout (1947) that caniceps was an “irregular winter resident in Lincoln Co, rather common in some years, rare during others.”

The 21 accepted records are in the period 30 Aug-5 Jun, most in the west, but these three are from the east: one in a Papillion, Sarpy Co yard 16 Jan-9 Mar 2000 was photographed, one in a Bellevue, Sarpy Co yard unaccompanied by other juncos 2 Oct 1977 was said to be “like the slightly larger juncos of Colorado with the large rufous patch on the back” (Cortelyou 1978), and one hit a window in Lincoln, Lancaster Co 27 Apr 1982, was rehabilitated, banded, and released 18 May (Cortelyou 1982); a report from Lancaster Co 13 Apr 1982 (Williams 1982a) probably referred to the same bird.

Bruner (1896) mentioned the collection of a specimen of aikeni with “decidedly pinkish sides,” presumably in Sioux Co. In winter 2020-2021 similar birds were photographed in Scotts Bluff Co 20 and 22 Nov (Mlodinow, eBird.org) and in Morrill Co 10 and 17 Jan (Strand, Winter; eBird.org), and in 2021 one was photographed in Carter Canyon, Scotts Bluff Co 29 Nov (Mlodinow, eBird.org). These birds appear to have been intergrades with mearnsi, which breeds in the Bighorn Mountains of northern Wyoming and whose range approaches within about 20 miles of that of aikeni in western Powder River County, Montana, at a location where extensive interbreeding occurred at one time (Miller 1941). More recently, however, no hybrids could be located in the area, and the current breeding range of aikeni appears to be separated from that of any other junco form (Nolan et al 2020).

Mila et al (2007) found that differentiation of the white-winged junco population “could be due to founder events and the subsequent fixation of rare alleles in a population of small effective size, although the influence of natural selection cannot be ruled out. The fact that some pink-sided juncos from the nearby Bighorn Mountains of Wyoming and even some Oregon juncos cluster with the white-winged juncos suggests that the alleles involved appeared (or became fixed) in the small Black Hills population and spread west through gene flow across hybrid zones”.

Resident: “White-winged Juncos” are fairly common in summer on the Pine Ridge, especially in the westerly canyons such as Monroe (Rosche 1982) and Warbonnet (Bruner et al 1904). The limit of the breeding range has moved east in recent years; Mollhoff (2001, 2016) showed that between the two atlas periods (1984-1989 and 2006-2011), the range expanded eastward from central Dawes Co to northeastern Sheridan Co. Mollhoff (2022) found a nest with nestlings at Chadron Creek Ranch WMA, Dawes Co 12 Jun 2008, noting that extreme wariness on the part of nesting adults make the nests difficult to locate.

Many “White-winged” Juncos are resident and so it is difficult to determine dates of migration. However, birds wintering in Colorado depart by mid-Apr (Andrews and Righter 1992).

A remarkable record of 40 White-winged Juncos in a flock in Lincoln Co 6 Jun 1911 was cited by Wright (2019); Wilson Tout observed this flock, which had been in the area for several weeks, finally capturing one (Tout 1947).

Many are resident, but detectable numbers drift southward beginning in Sep. Arrival in non-breeding areas south of the summer range is indicated by singles banded at Wildcat Hills NC, Scotts Bluff Co 2 Oct 2007, and 30 Sep and 2 Oct 2009.

“White-winged” Juncos wintering south of the breeding range into Colorado arrive around mid-Oct (Andrews and Righter 1992), suggesting Nebraska reports away from the Pine Ridge after 30 Oct are likely of wintering birds (see Winter).

Winter:  Many summering birds are resident (AOU 1957), although in some winters there is considerable movement south of the summer range, most notably to Colorado (AOU 1957), where it occurs mid-Oct through mid-Apr (Andrews and Righter 1992). The eastern limit of regular wintering in Nebraska appears to be Keith Co (Rosche 1994, Brown et al 1996) although there are reports Nov-early Apr from west central counties Keith, Lincoln, and Logan, with easternmost reports 23 Dec 2002 Harlan Co Reservoir, Harlan Co, 12 Feb 1917 a specimen #2782A in the Brooking Collection taken at Inland, Clay Co (Brooking, Notes), 22 Feb 1935 Adams Co, 5 Mar 2019 Hall Co, and 4 Apr 1955 Keya Paha Co.

Easterly reports are few and generally undocumented. Some, if not most, easterly reports may in fact be variants of “Slate-colored Junco” with exaggerated wingbars (Robbins 2018); aikeni, however, is a larger and paler bird overall than hyemalis. None of five reports from the east are documented. 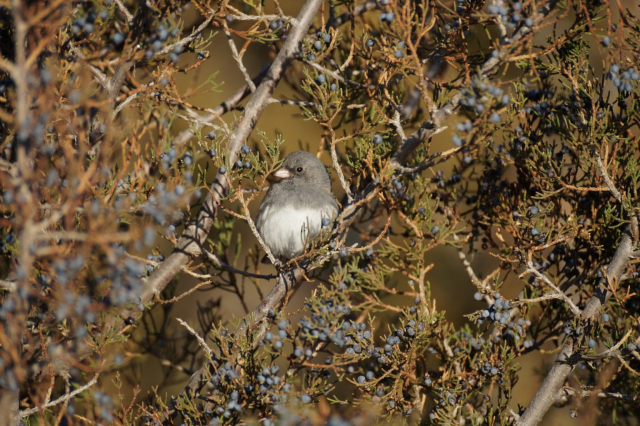 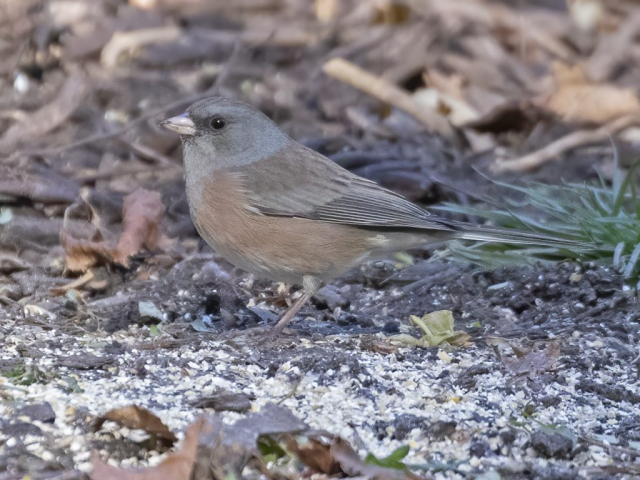 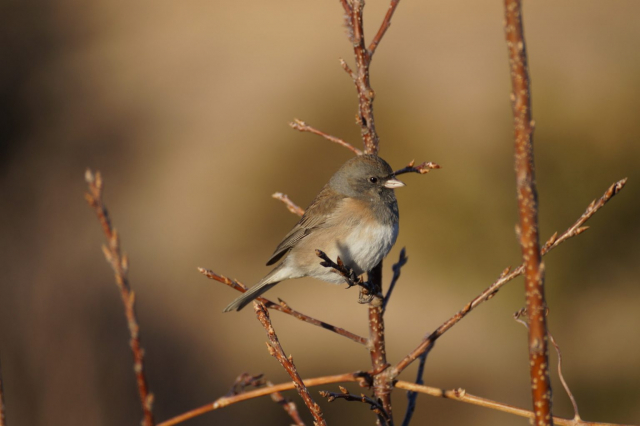 Rising, J.D. 1995. A guide to the identification and natural history of the sparrows of the United States and Canada. Academic Press, San Diego, California, USA.