Migrants arrive in late Apr, entering Nebraska via the southeast. By late May the expected summer range is occupied.

Migrants are uncommon in the Panhandle, which is outside the expected breeding range; arrival there is generally in late May and Jun (see Summer).

Summer: Dickcissel is a common, locally abundant, breeder in the southeast, and common elsewhere east of the Panhandle. In the west, its abundance is highly variable from year to year, being common in some years and absent in other years. There is little information on historical occurrences in the west, but the few records suggest that occurrence there, including a few old breeding records, has always been highly variable (Ducey 1988, Bruner et al 1904). Mollhoff (2022) cited a nest with eggs found by M. A. Carriker Jr. on Jim Creek, Sioux Co 26 Jun 1901 (UNSM ZM8957).

Major incursions into western Nebraska occurred in 2005, 2006, and the years 2008-2011; the years 2012-2017 saw a return to the normal low numbers of reports in the west. The reasons for these incursions are not understood; much marginal agricultural land was put into crop production from around 2005, perhaps causing male Dickcissels to search suitable habitat westward. Finck (1984) found that territorial display in Dickcissels functions in male-male competition for habitat rather than to attract females, suggesting that habitat availability is indeed a factor in male distribution.

During incursion years, reports are throughout the Panhandle, including the southwest and Pine Ridge. Mollhoff (2016) showed the species occurred statewide during the second BBA period 2006-2011, including most of the incursion years listed above, but was largely absent from the southwestern Panhandle and northwestern Nebraska during the first BBA, 1984-1989 (Mollhoff 2001). BBS trend analysis shows the species has declined 1.82% (95% C.I. 0.40, 3.03) statewide 1966-2015.

Numbers increase throughout the expected breeding range during incursion years; in 2006, broods were present by 4 Jul in Clay Co when usually adults are not seen until Jul, and, despite not arriving at Valentine NWR, Cherry Co at the northwest edge of the expected breeding range until 5 Jun, they were “extremely common” by 15 Jun, including two nests found. During the same year, numbers were high in the core range; 75 were counted in Cedar Co 21 Jun 2006 and point counts in a southeast Nebraska Henslow’s Sparrow study area in 2006 (Silcock and Jorgensen 2007) yielded an estimated density of 80 Dickcissels per 100 acres.

In the 2008 incursion year, at the west edge of the expected range, Dickcissels were “everywhere” in Keith Co 17 Jun, where the observer surmised that wetter conditions allowed for more weeds, and “abundant” in Lincoln and Custer Cos where a BBS route recorded them at 25 of the 50 stops. A BBS route as far northwest as Crawford, Dawes Co had a count high of 12 on 5 Jul during the 2011 incursion year.

Major incursions usually become apparent in the west in early Jun and consist almost entirely of unpaired males. Rosche (1982) indicated that he had “never observed a female nor any courtship or possible nesting activity,” and that singing males “often did not arrive until mid-Jun or even mid-Jul, sang for a week, and departed.” Of the surprising 30+ on a BBS route in Cheyenne Co 4 Jul 2009, most were males; only one pair was seen. Fretwell (1977) documented an unequal sex ratio in favor of males, which was thought to account for the many unpaired territorial males. Data from Kansas (Zimmerman 1982, Finck 1984) showed this absence of mates for males occupying much of central and western Kansas. The arrival during incursion years of males in the west occurs about a month later than in the expected breeding range and reinforces the idea that these birds are unmated males; it has been suggested that Dickcissels may nest earlier in the southern portions of the breeding range and then shift northward, perhaps nesting a second time (Basili et al 1997).

The vast majority of reports west of the expected breeding range occur during incursion years; at these times there are reports throughout the area, including the area south of the North Platte River Valley and the western Sandhills.

Breeding locations are abandoned by the end of Aug, and most birds leave by early or mid-Sep.

Fall flocks are rare in Nebraska, despite the propensity of Dickcissels to form huge flocks during fall migration (Temple 2020), suggesting that such flocks form to the south of the state. 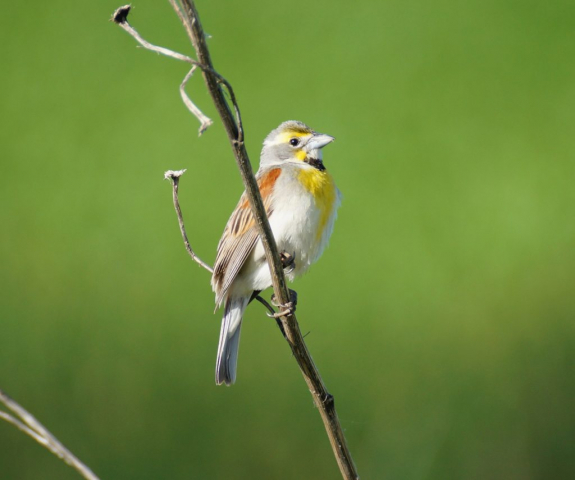 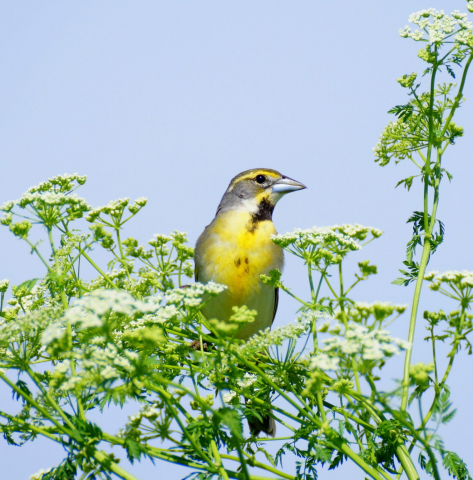