Eastern Meadowlark (Sturnella magna; EAME) is a widespread grassland species found throughout most of the US east of the Great Plains. There are 17 subspecies recognized (Pyle 1997), only four of these occurring north of Mexico: lilianae, breeding and wintering from central and southeast Arizona to southwest Texas and north on the western Great Plains to southeast Colorado (Leukering and Pieplow 2009), hoopesi, resident in south Texas, argutula, breeding and wintering from southeast Kansas to southeast Texas east to North Carolina and Florida, and magna, breeding from Minnesota to New Brunswick south to north Texas and Virginia, wintering to south Texas and Florida (Figure 1). 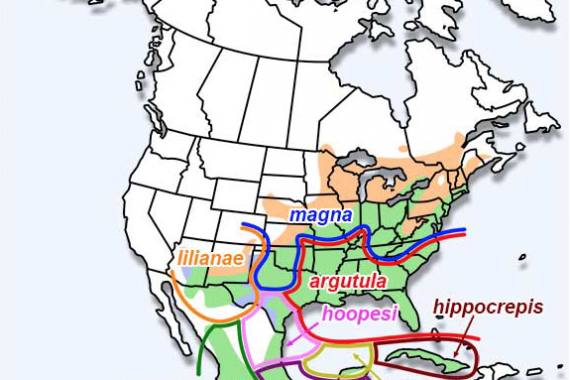 Figure 1. Subspecies ranges of Eastern Meadowlark in North and Central America (from Whatbird).

Recently, observers in Colorado have found lilianae close to the Front Range as far north as Boulder County, most recently 19 Jun 2018 by Steven Mlodinow (https://ebird.org/view/checklist/S46663706). Mlodinow’s eBird checklist (www.eBird.org) contains three spectrograms of the song and an extensive description of the bird, including the following:

“[Song] not as jumbled as WEME [Western Meadowlark], higher pitched than WEME but not as much so as nominate subspecies group. ….. The dark and light striping on the head was more contrasting than in any of the WEME nearby, but not quite as dramatic as in magna. The auriculars were not stunning white, but dusky — in overlap zone between lilianae group and Western Meadowlark from what I can see [from pictures]in Macaulay Library [https://www.macaulaylibrary.org]. The throat was yellow and the malar white, contrasting with both auriculars and throat. I could see no intrusion of yellow onto throat. The belly was yellow, but the sides were white with dark streaking from shoulder area to legs. WEMEs seemed to lack streaking (more like elongated spots) or have streaking only lower, near legs, but not near chest.”

There are no reports as of 2018 claiming lilianae for Nebraska. It is quite possible that, due to the variation in songs of meadowlarks, aberrant WEME songs or unrecognized songs of lilianae were reported as EAME on a few southwestern BBS routes; identification of lilianae is discussed by Leukering and Pieplow (2009) and below.

The distribution of reported EAME in Nebraska, as indicated from BBS Survey data, is shown in Figure 2. Note that the western Sandhills population is isolated from major eastern populations by extensive areas in central and western Nebraska with few or no EAME (brown and yellow dots). The area of higher numbers of EAME in northeast Nebraska coincides with the extensive hayfield meadows in that part of the state, although the purple dot corresponding with the Petersburg BBS route that indicates an average of 30+ EAME (per number of times the route was run) seems anomalous. 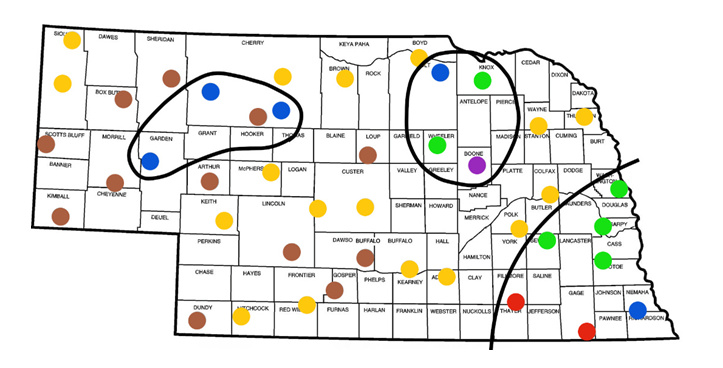 “… unrecorded west of its regular range. … Some western records appear to be little more than breeding range extensions or overshoots. In Colorado, the species has been confirmed from the far NE part of the state”.

Thus, BBS data (Figure 2) showing 0-4 EAME per route run (brown and yellow dots) may reflect scattered wandering or overshoot singing EAME rather than an established contiguous breeding population like that in the western Sandhills. It is possible that some of the EAME reported on BBS routes in southwestern Nebraska pertain to lilianae (Figure 2). Hybrids between WEME and EAME are essentially unknown or at best very rare and local (Rohwer 1976, Lanyon (1957). Identification of lilianae is discussed below and by Leukering and Pieplow (2009). 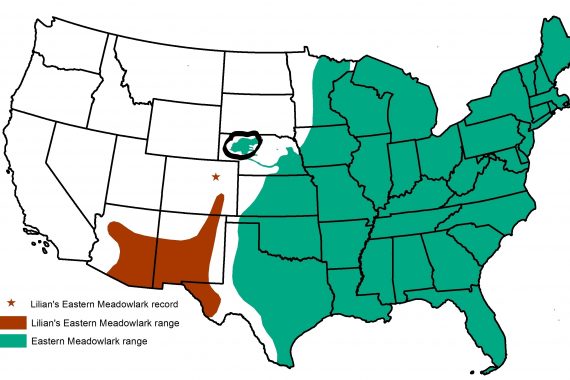 Figure 3. Distributions adapted from eBird of lilianae (brown) and EAME (green). The black outline locates the disjunct western Sandhills range shown in Figure 2. There is no overlap between the ranges of magna and lilianae in eastern New Mexico and western Texas.

Lilian’s as a species?

It has been proposed recently to elevate lilianae to species status (AOU 2016). Although the proposal was not approved, some current authorities accept the split (Sibley and Monroe 1993, Fraga 2011). Rohwer (1976) found lilianae to be 100% diagnosable and suggested that it may warrant species status, and Barker et al. (2008) provided genetic evidence that augments the previously documented differences between magna and lilianae in habitat, plumage, and voice. However, Barker et al (2008) did not sample EAME (magna) at the west edge of its range or lilianae at the northern edge of its range, notably omitting Nebraska’s western Sandhills population.

Following are selected comments from the 2016 proposal to split lilianae (AOU 2016) as submitted by Marshall Iliff. Emphasis is mine.Vocalizations of lilianae are much more similar to those of EAME (magna) than WEME. Both magna and lilianae have similar whistled, melodic songs. Cassell (2002) pointed out the lower pitch of the songs of lilianae as compared to magna. Follow up analysis by Pieplow (2009), elaborated upon by Leukering and Pieplow (2009), reveals more complexity to the songs, although average differences are upheld, with lilianae indeed having a lower pitched song and a usually downslurred final note. Because meadowlark songs are learned, the average differences in songs [between magna and lilianae] may not be as meaningful as differences in call notes, especially given the stark differences between EAME and WEME in typical song and contact call. However, the calls of lilianae are certainly very close to those of the rest of the magna group and may be indistinguishable.

Subspecies lilianae has entirely white outer three rectrices (r4 to r6) and the third rectrix (r3) is mostly white. In addition, the cheek of lilianae is markedly whitish as compared to other taxa within the magna group, which all have grayish or brownish cheeks. Lilianae has a white malar, as does EAME (magna), whereas WEME has a yellow malar.

Leukering and Pieplow (2009) in their paper on Colorado meadowlarks, after extensive discussion on identification, concluded:

This Birds of Nebraska- Online Blog Post suggests that, in the absence of any information identifying with certainty singing meadowlarks in western Nebraska, the possibility remains that “Lilian’s” Eastern Meadowlark may occur there, especially in the western Sandhills and southwest. Thus, I recommend to birders in general, and those who operate BBS routes in the western two-thirds of Nebraska, that recordings be made of any meadowlarks whose songs are not typical Western Meadowlark songs, and, perhaps more importantly given the discussion on vocalizations above, photographs of the spread tail.